I’m trying to make one short video every day leading up to christmas, each one reviewing a small part of the same pro game. Will I succeed? Almost certainly not. But stick around to find out how far I make it!

Here’s the first one, which introduces the game I’ve picked and talks about the first 12 moves: 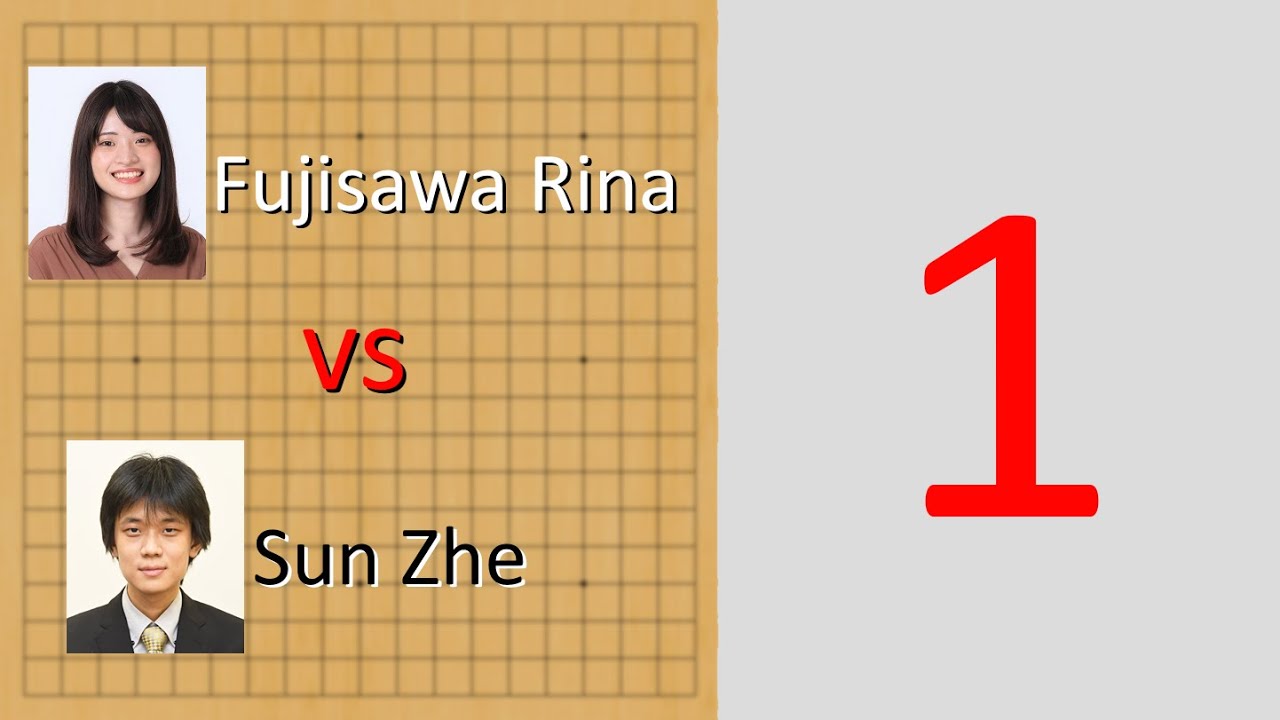 Edit: If you’re dropping by here later on and want to watch the videos without the other discussion in this thread, check out the playlist!

Nice review! I enjoyed it.

My only nitpick is that it might have added to the commentary to have briefly discussed the avalanche (or, “avalanche complex”) around the 5:20 mark, ie. White Q4 instead of R6.

You could just have given the simple hypermodern “false avalanche” variation at https://online-go.com/joseki/32845 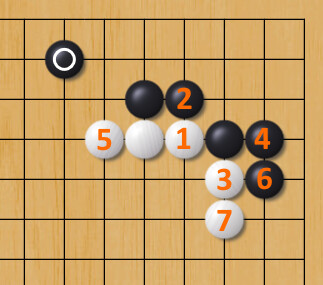 Q4 is not an insignificant line in this whole-board position, providing about 12% of play in Waltheri.

As for the question, I would definitely approach at

Yep, of course there are lots more things I could have talked about! The avalanche is indeed very playable in this case. KataGo seems to prefer for black to go into the small avalanche: 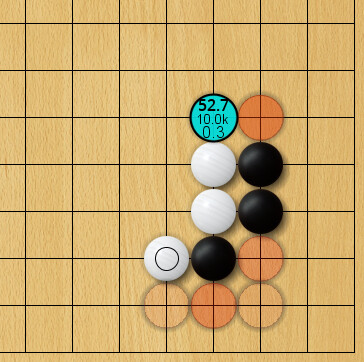 But later on in the variation there are several different ways it could turn out, so I would probably have to devote a whole video to just the small avalanche then

(not a bad idea, maybe another time!) 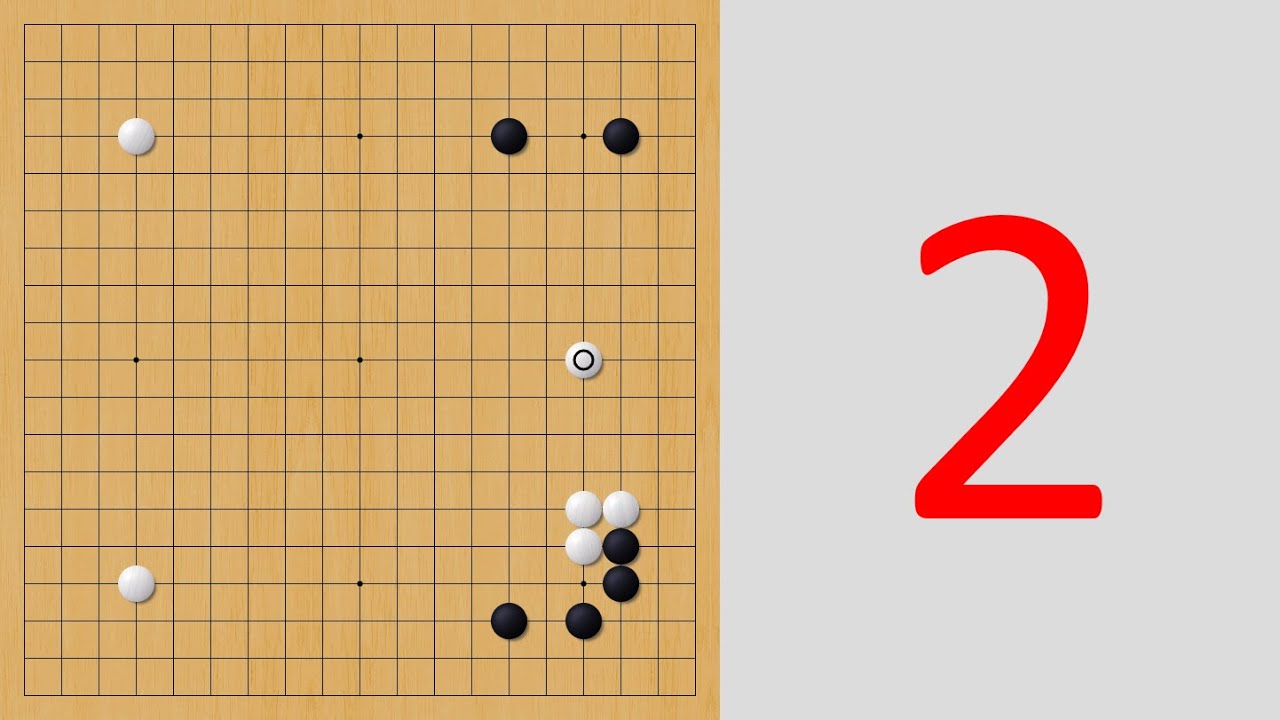 White Q17 surprised me! I would have expected Q15.

That’s a good shape instinct! Q17 makes sense locally, but it’s kind of a bad shape (allowing hane at the head of two stones). According to KataGo, Q17 and Q15 are both playable, but it slightly prefers Q14: 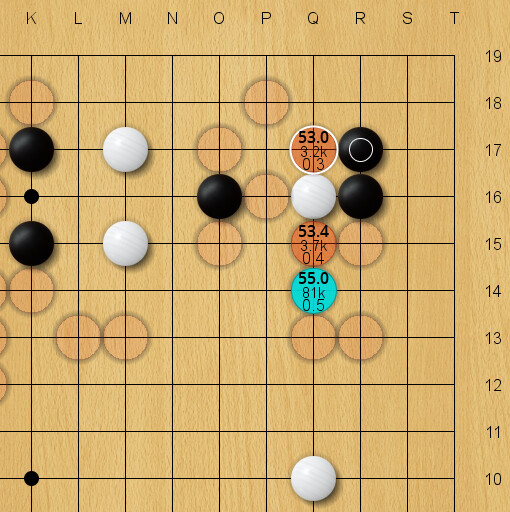 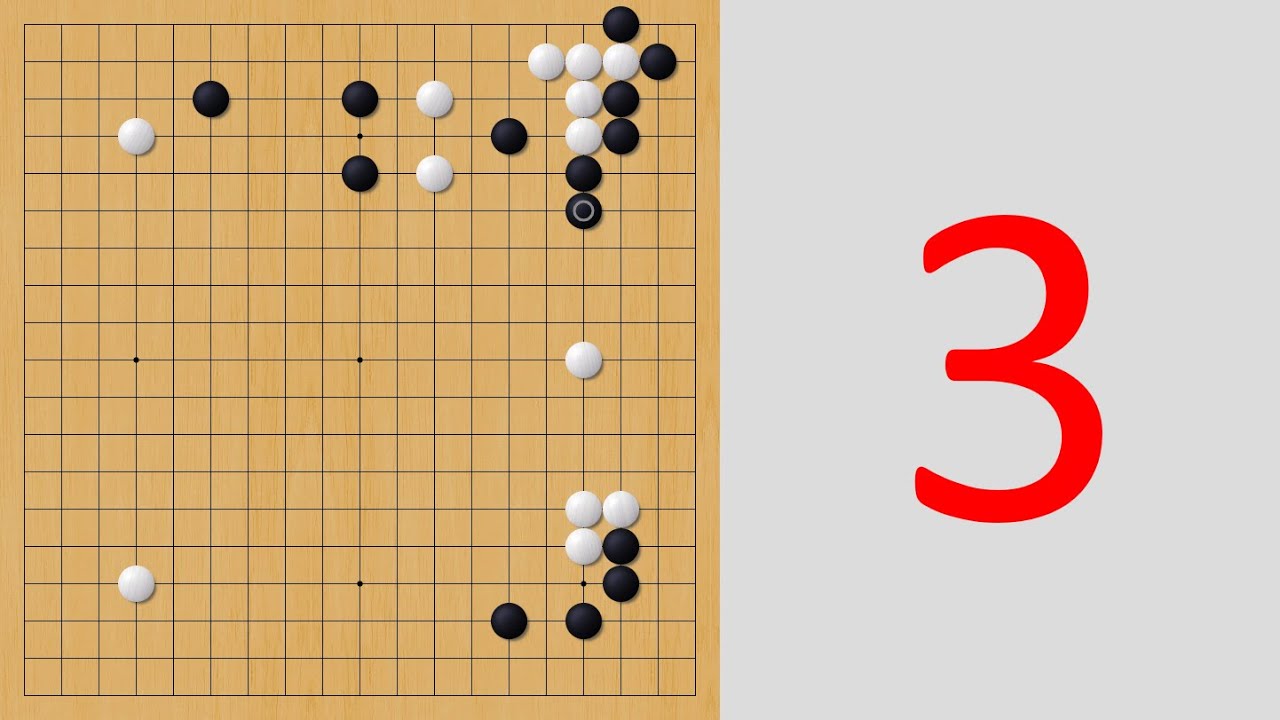 It probably is just my impression, but does this game have more settling of corners in the initial moves than usual? I haven’t really watched so many pro games, but it seems to me like they are establishing stuff well enough before moving on to the next part of the board they want to “negotiate” about.

Disclaimer: I’m probably wrong, I’m not good at this plz don’t kill me 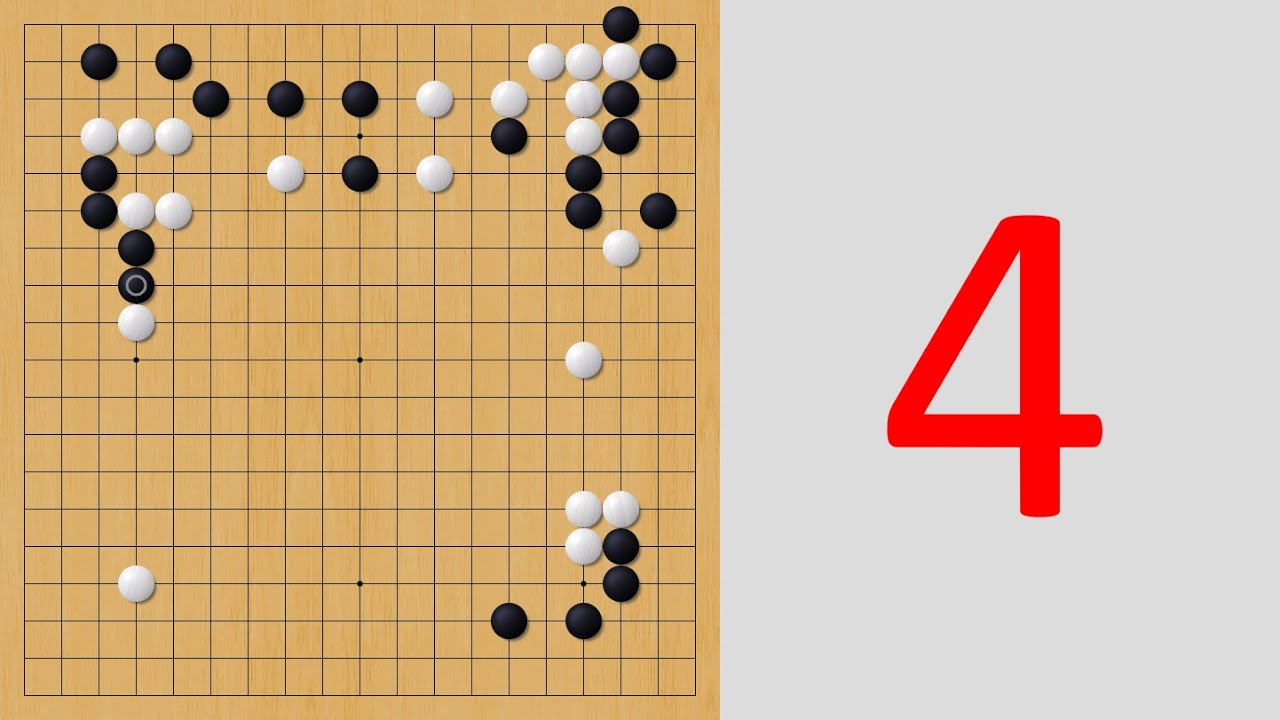 One can automate video releases on YouTube, but there isn’t a post scheduling feature on these forums.

Thanks for linking the new video yebellz! You correctly identified why it was posted on YouTube but not here (I may have been asleep…

does this game have more settling of corners in the initial moves than usual?

It’s a valid impression! I’m not sure how to quantify this really, but I believe this game is pretty average in that sense. The lower right corner joseki is very settled, but the upper left corner was a case where white ignored blacks approach, so it was left undecided for a few moves who would get C14 (you may have noticed in a few variations that whoever ends in sente in top right will take C14, it’s a really big point, but top right is even more important while it is unsettled).

So the game has a little bit of both, but I agree that they are mostly playing out one area before switching to the next. Humans have a tendency to play this way, to keep the game simpler. Sometimes you can even see humans playing out a long sequence in one corner while another corner is completely empty. But this is very rare for an AI to do, it will find a good place to tenuki to take another big point.

AI:s don’t care about keeping the game simple, so this is one of the reasons that human pro games can still be more educational than AI games, even though AI makes “objectively” better moves. There are several points in this particular game where the AI would want to make a different move than the pro, but even after having seen the analysis, I would rather play the human move in the same position, since it looks easier to follow up for me.

Humans have a tendency to play this way, to keep the game simpler. Sometimes you can even see humans playing out a long sequence in one corner while another corner is completely empty. But this is very rare for an AI to do, it will find a good place to tenuki to take another big point.

Given that I almost never look into AI in any form, that was probably a weird thing for me to notice, LOL!

Thank you for explaining in a way that makes sense

Why are these weak humans settling all their weak groups before moving on to the biggest points on the board? Looks like they haven’t heard of the proverb “Don’t blindly follow the opponent around the board”! 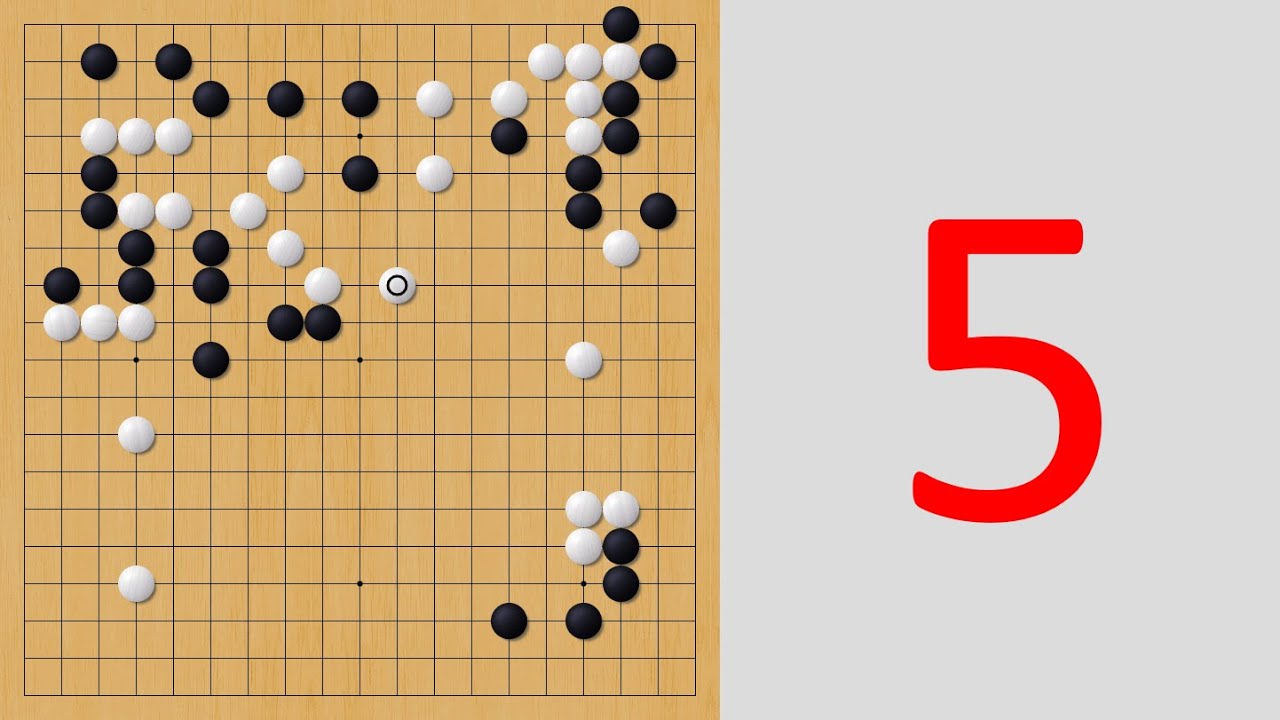 Maybe I should start adding a poll here for the question at the end of each video? I’ll keep doing it if it gets a few votes

Where would you play?

(Just because B seems obvious and I can’t even imagine how A could create something. I’m the disruptive vote. 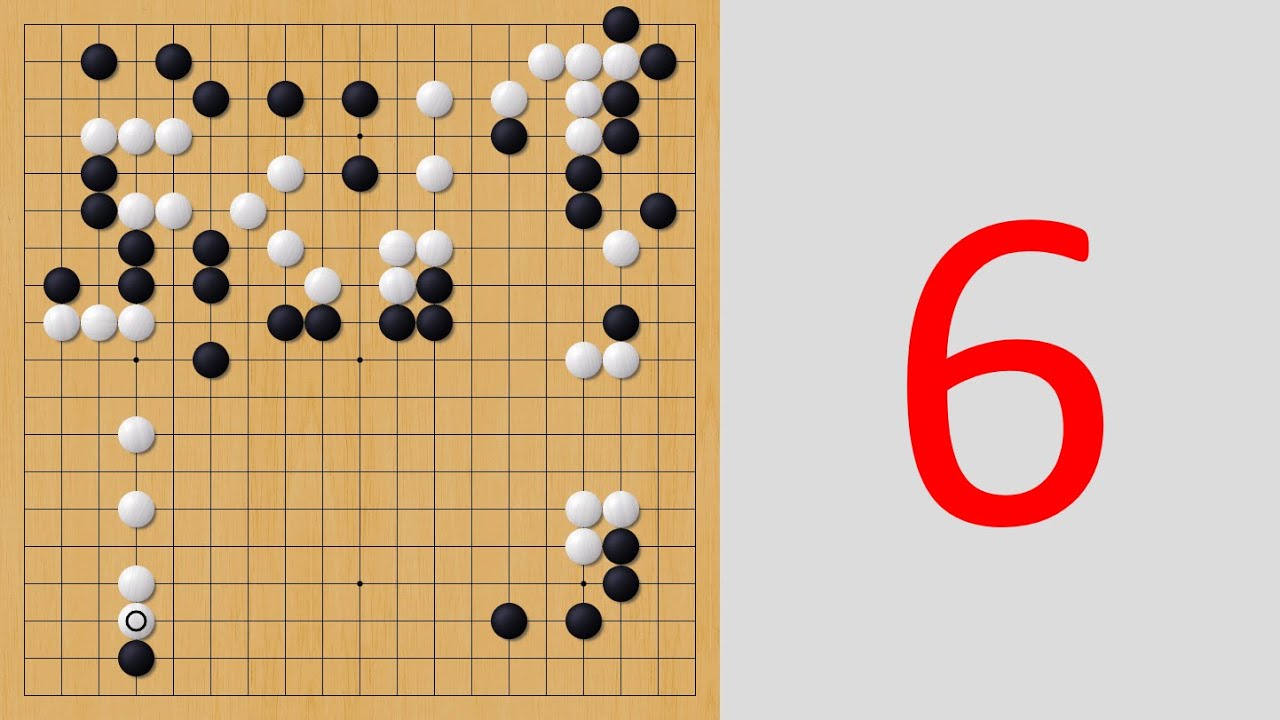 Where do you think white should play? 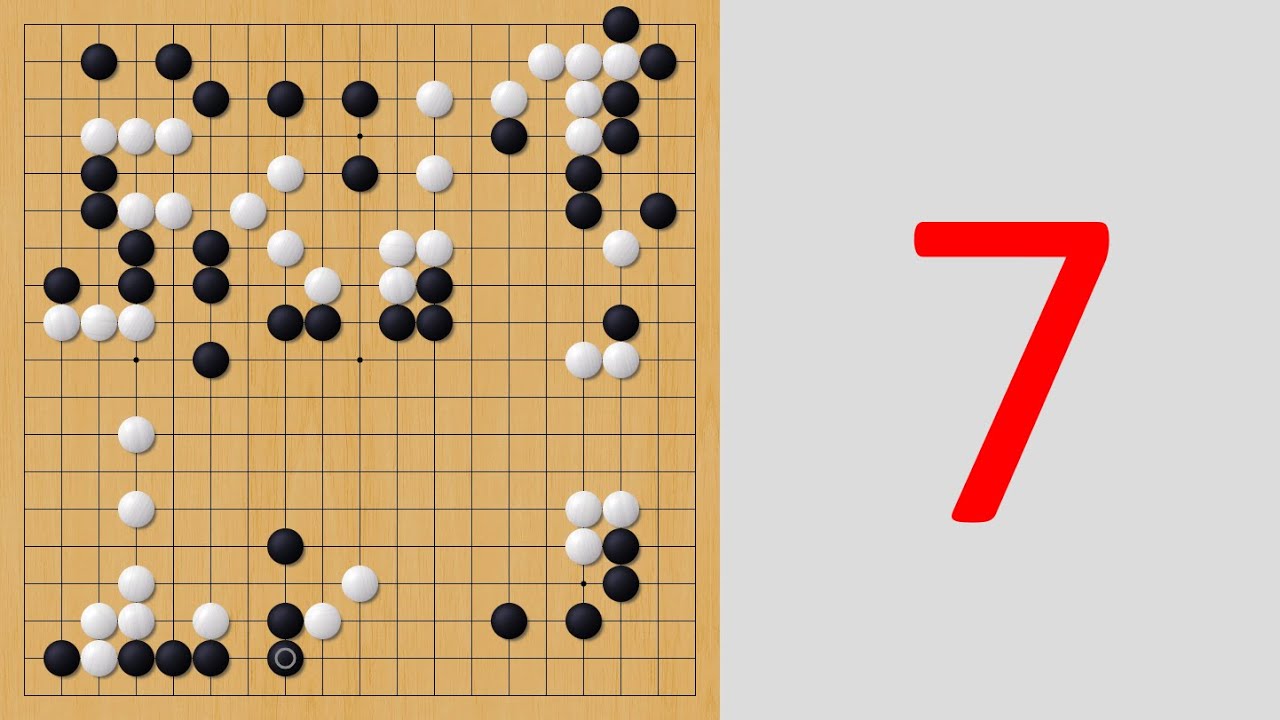 Where should black play?

The main reason I liked J6 more than N5 in the last question, is that I would expect black to play something like K5 or K6 as a follow up, which would simultaneously threaten to disconnect the J3 stones and create potential for the centre. I’m surprised Black responded with S10 instead and allowed White to play both N5 and J6.

K6 for black would be a good move! KataGo even thinks it’s a little better than the game move, but white is seemingly ok (ahead by 2 points or so…) by just connecting with a strong shape at M4.

K6-M4 then looks to me like it would be a great sente exchange, but KataGo doesn’t seem to think that it is a very urgent point (it is suggesting all kinds of other endgame moves before it). Maybe the reasoning is that by playing K6-M4, black helps white to connect, while in the game there will still be some problems with that connection later on (coming up in next video

But to reiterate what I said in the video, all three options were pretty similar in winrate in the last quiz, so really there were no right or wrong answers. Here are KataGo’s opinions after 30k playouts: 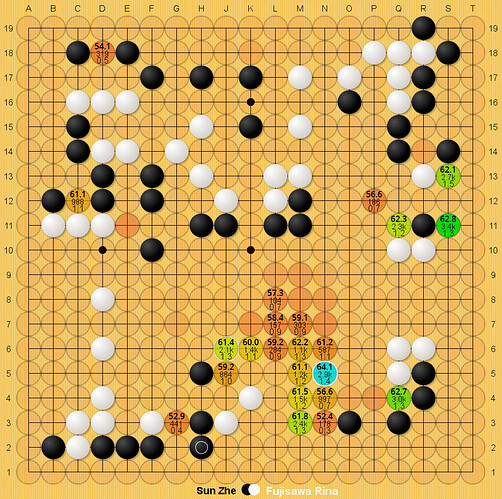 I’ve been trying to mix it up a bit between questions that have one clear best choice, and questions where all moves are good and it’s more a matter of style. I hope that it doesn’t matter too much for the viewer, since the beneficial part is just thinking about the position and forming an opinion (getting the “right” answer isn’t as important as the exercise you get while looking for it).

The A-B choice from the end of part 7 has a clear correct answer (i. e. one of the moves gets significantly worse winrate from KataGo, and there is a concrete reason why). I would be interested to hear any feedback on which type of questions (one correct answer or multiple correct answers) people generally prefer