I took a break from fixing bugs to do something fun over the weekend, you can now create animated pngs from moves for any game. Click the Link to game on the right side of any game

Select what moves you want to make and how fast you want the moves to play, click ‘Preview’ to make sure it looks right 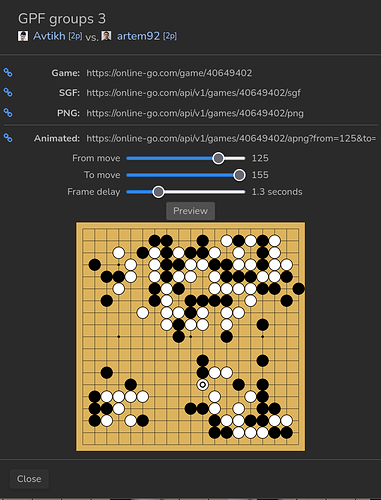 and then copy/paste the URL anywhere to share a little movie. P.S. I limited it to 30 moves to start with, let me know if that’s sufficient or not.

This is so cool. It’s also like a stealth forum upgrade, too.

Nice, this is going to make threads like “worst moves ever” more fun

Minor bug maybe: the max value for the “To move” slider is the move you happen to be viewing at the moment. Shouldn’t you be able to slide that up to the end of the game?

How do I get the preview to work like in the OP?

Could we have it for demo/reviews (branch selected by its last move)?

Another funny option would be backtracking.

A last to be able to pause maybe (by touching it?)

Looking at the op it uses image tag syntax Maybe it would work automatically if the OGS link had a .png extension?

Personally, I think you should be able to slide it up to one move past the end of the game, and interpret the sliders as defining a half-open interval instead of a closed interval, but I’m probably nearly alone in that (though probably less so on these forums than in the general populace, I wouldn’t wonder).

useful, animation is much easier to understand than move numbers

it doesn’t work with review and demo boards?

Ok links should be more digestible by things like discourse and other platforms, should just need to paste the link in without any other trickery now: 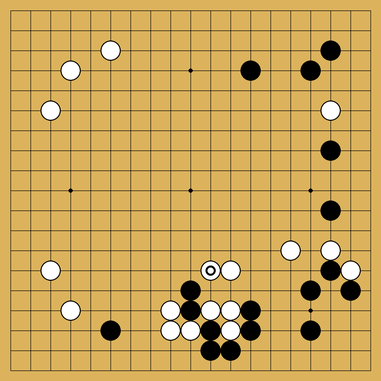 Reviews aren’t supported yet, reviews and variations are a bit more tricky interface and backend wise 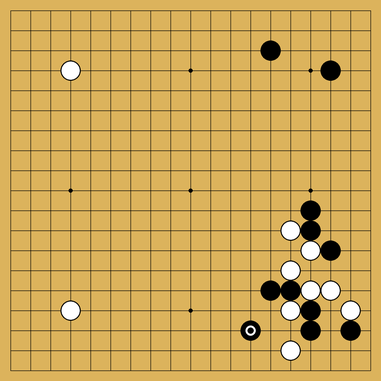 I get that reviews are messier with the variations, but it would be great to have an easy way to share arbitrary variations for go content here on the forums (showing some solutions variations to a tsumego, and things like that). So if you do figure out a way to do it, it would be much appreciated

Also there is a rogue 0 below the links

P.S. I limited it to 30 moves to start with, let me know if that’s sufficient or not.

Is there some reason doing it for whole games would be too much?

It starts taking a good deal of processing time for a few hundred moves, and it didn’t seem particularly interesting, no one wants to watch a gif playout for 5 minutes (by the time you’re interested in a game, best to just go to the game itself where you can play, pause, skip around right?)

If you want animated gif of whole game the WebGoBoard Chrome plugin can do that on any sgf you download in browser.

Yes, I have that extension… that’s why I asked if it would be too much trouble for us to offer the same functionality… I guess the difference is whether the processing happens server-side (like here on OGS) or client-side (like in the extension).

The place where i saw most of them is Wechat. ( I never used other messaging app which can have the same demand).
Anything more as 90s is pretty rare, maybe even not possible to post (i didn’t try) there.
I just say that some L&D problems, josekis,… can go a bit over 30 moves (a ladder being a trivial example) so 50 maybe would cover better?

AWESOMESAUCE! Thanks a lot!

I know about that Chrome plugin, after all I’ve often beaten the drum for it, here and elsewhere, but it depends on Chrome, and there are a few reasons not to use that browser.

Could it help if creating a whole-game animation would NOT be something time-critical? Like, no problem to wait an hour, so as to better distribute server time-slices? (Note: I have no idea how the server and the creation of the animation works.)

I think the full game animations would be most valuable for pro games played on OGS, nat’l or int’l championships, etc.

Oh, and would these be editable in Photoshop? Oh, nevermind—I’ll try it in a minute.

would these be editable in Photoshop? Oh, nevermind—I’ll try it in a minute.

Nooooooooooo: I downloaded the apng in the OP, opened in Pshop … all I got was one layer

Note: When d’loading, the name field in the file selector panel only said “apng” … I kept this as extension and added “game” as name, thus making it “game.apng”.
Should I have done it differently?

Never mind, I changed the extension to PNG and opened it in Preview.app (macOS): 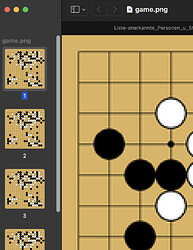 There it shows all frames, which I can drag out (albeit only one by one, not all at the same time

), and they show as TIFF files.

I changed the name to apng.gif becuase I was lazy, but something .gif would probably work.

I could see all the images in preview for example.