I’ve often used capture go (also known as atari go) to introduce new players to the game. The differences from normal go are as follows:

For new players, it’s good practice for recognizing atari and ladders. For experienced players, the game usually continues to where you would pass and count in a normal game of go. However, since passing is not allowed, you are then forced to play inside your own territory. The player with less territory will eventually be forced to fill in the eyes of one of their groups, at which point they will be captured and lose the game. In this way, the main strategy of the game becomes to surround territory, even though the rules don’t mention anything about territory!

My interest in capture go was reawakened recently by this app which made me realize that there is no need to start from a crosscut. This leads to much more variety in the opening, and I think a very interesting game even for experienced go players. It’s similar to go, but different in a few important ways: for example, see this problem. I’ve played a couple of games online in the app, but unfortunately it’s not very popular, so usually no one is online to play.

So if anyone is interested in playing this variant with me, just send me a challenge with “Capture go” in the title! Obviously capture go isn’t implemented on OGS, so we’ll have to follow the rules of not using the pass button and resigning if we get captured.

It seems like a very different game than regular go. Since it is impossible to capture many dead shapes without first throwing in (sacrificing) a stone, it becomes easier to live with outlandish invasions into settled territory.

Indeed! So if you want to make secure territory, you will have to be more conservative than in normal go (smaller extensions, playing more on the third line than the fourth, etc). An extreme example: I think you can invade under a 3-3 on the 2-2 point and live (or escape)

This is CAPTURE Go. The rules are simple: The first player to capture a stone or group of stones wins. Once a player loses a stone, he or she must resign. If no stones are captured during the game, then the game is scored like a normal Japanese...

Hm, might be a bit of a problem since all tournaments are ranked, right?

That’s great, thanks for making me aware of this!

Interesting, they use this rule: “If no stones are captured during the game, then the game is scored like a normal Japanese game.” instead of banning passing.

That seems to change the game significantly. All those pseudo-alive groups would then be eventually counted as dead, and making late invasions to avoid filling in your own eyes is less effective.

Oh, I didn’t interpret it that way, I think all stones on the board count as alive, and you count territory as in a normal japanese game. See this game from an earlier tournament for example.

It seems like strange wording then. It may be their intent to apply territory scoring with all stones assumed alive, but that hardly resembles the counting in a “normal Japanese game”.

It’s not true that any stone on the board is considered alive. The no passing rule forces play to continue until something is captured. On a 9 x 9 board the maximum number of moves is 80.

There is an online implementation of Atari Go here: 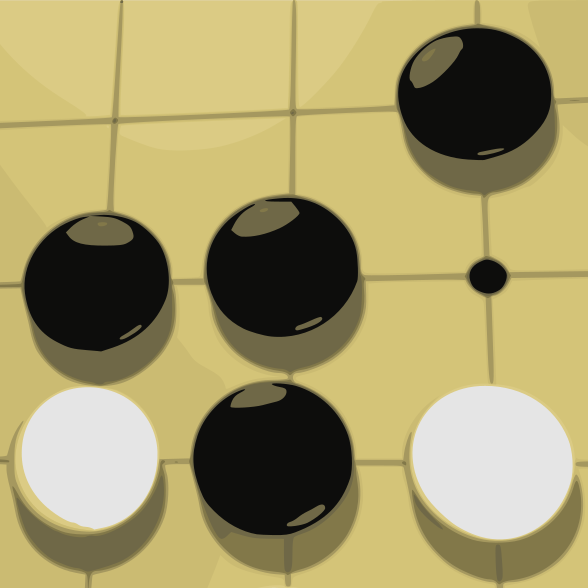 Surround a zone of your opponent. A simple variant of the oriental game Go.

Here is an example of a game that continued until something was captured due to lack of liberties as all empty intersections on the board were filled in: https://bodogemu.com/en/play/21/history/47e2e09b-73ee-4698-ab3d-f1cbd45a6975?turn=75

I like this example because some historical counting systems involved a “cut tax” of 2 points per group which was deducted from each player’s score. The rationale for this can be seen in the example game above - each group needs 2 eyes to live and that is why white wins - despite black having a greater area of the board.

Atari Go is great fun and it would be useful if this functionality could be added as a ruleset to OGS. It would be very useful for teaching beginners and is also a fun variant for 9 x 9 fans such as myself

Somehow I had managed to overlook that thread. Thanks for sharing!

That’s not what the thread is about though.

So maybe one could think of capture rengo where the player resigns if they were the player who played the move previous to the capture.

I think having multiple “lives” essentially given the players, is an interesting idea, meaning some kind of ko capture can still be dangerous for the person to make the first capture

There is a multiplayer elimination capture-go game being played in the forums right now: The First Go Battle Royale ⚔ - #530 by sokoslav

Maybe I should’ve mentioned “teams”. Like 3v3, with just two colors, but when a stone is captured a player on the team is eliminated instead of the game ending.

I was part of that game