The new sounds are live, feedback is appreciated!

And some feedback about the new voice:

Ive not heard all the sounds quite yet, but i have heard the new stone sounds. The issue i have with it is that it sounds… echoey a little. making it sounds more synthetic than it really aut to be. But that could be because of my computer. So its ahrd to give any super solid feedback on that one.

You’re not alone, I’ve heard that complaint a bit too, I’ll see if I can collect some new samples and reduce the collected reverb.

1 vote for using no sound.

You can turn it off in settings

No worries, once i play some live games, i will give more feedback on the other sounds. Im here to help as much as i can.

This is not how we do polls around here.

But you’re aware this is not one of the fun threads, right?

Are you calling anoek humorless?

HI, i just think ill really miss the old sounds. i like how simple the were. im happy for all of those that enjoy them. but i was wondering if there was a chance users could choose wich audio system they like.
Thanks
The server is really good
this is just me being picky :P(Is there ANYY chance tho? lol)
Tomás

It’ll be pretty easy to add a sound pack with the old sounds, I’m doing it now

I would say the biggest problem with the original sounds where that they were too loud and kind of abrasive. I didn’t necessarily dislike them, but I did dislike aspects of them. The old stone sound, for example had a satisfying click, but needed to have the high end frequencies rolled off and needed to be turned down so as not to be so jarring. The old voice is also nice but is also just too loud. The old timer beeping is just too intense sounding, I prefer the new ticking but having it start at 30 seconds is insanely stressful, especially since I usually play with 30 second byo yomi perods. I feel constantly rushed even though normally I feel like 30 seconds is a decently long byo-yomi.

Overall I’d say I like the new stone sounds a lot better and I like the ticking sound better. Ticking should start at 10 seconds imo. The new voice is a bit weird to me, not sure what it is. It is less abrasive but somehow odd.

I like that in general the new sounds are more calm! Thanks for adding these and asking for feedback!

Ticking should start at 10 seconds imo.

Take a look at the settings page

Regarding “too loud” … I’m hard of hearing and always glad if things are loud enough for me, as my hearing aids are not as good as my bio-ears used to be.

Hi! I really like the new audio. Thank you so much!

Oh no, just saying, no option for that vote. No problem. Just prefer no sound I guess. Thinking now of a setting where you can choose between a light stone placement, gentle, soft; and the other end a hard, forceful placement, for emphasis. That way when you make that invasion play you can slam the piece down, or if your unsure, it sounds like a snowflake hitting the board, ya know?

The new sounds are much better than the old.

To have more options for when to start the every second countdown and the ticking sound would be nice. Hearing the countdown pressures me to much. To be able to limit the countdown to 5 seconds or 3 seconds would be better for me.

To have more options for when to start the every second countdown and the ticking sound would be nice. Hearing the countdown pressures me to much. To be able to limit the countdown to 5 seconds or 3 seconds would be better for me.

You can do this under settings 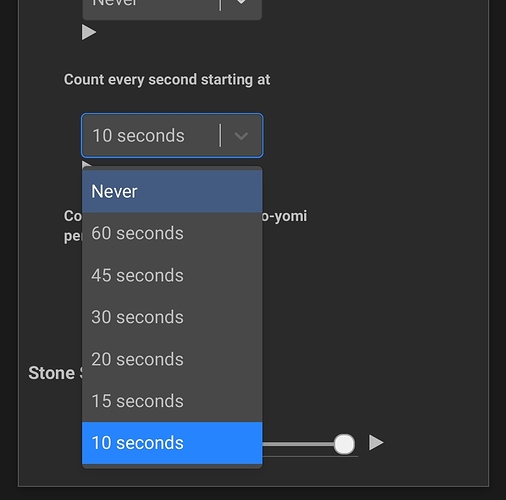 Ive just played a live game. The one thing i dont really like is the voice saying “Time to remove dead stones” or whatever it is she says. Most people already know the different phases of the game so it seem redundant to me.

The voice is interesting. It will take some time to get used to… i dont know if i like it persay… but its deffinatly better than the heart attack inducing voice from before. I swar to you, the ammount of times ive had headphones in and she’d scare the ever loving F**k out of me was unbelievable. I dont see that being too much of an issue with the new voice.

Another idea may be to include a male voice as well, and toggle between the two? or three if you include the old one as well. Some people prefer a womans voice, others amale voice. It would be interesting to see which people pick and for what reasons as well. But understandably, that would be something of a large ask.

I really like the tick tock sounds though, by far the best addition in this update!