In a joint effort between the AGF, BGA, and OGS we’ve created https://beta.kidsgoserver.com/ which is a site dedicated to introducing the game to young kids. We’re planning on “releasing” it soon, which means putting it up on the production domain and announcing it as being ready to a larger audience, however before we do that we’d love to get some feedback from anyone interested in willing to check it out a bit.

The focus at this stage is to provide a fun friendly safe place for kids to play. Future directions will likely add some support for teachers managing classes of students and the like, but for now it’s limited to “Go here and play”.

After a quick look I think it may become my next favorite server!

I played the strongest bot.
The game got miscored and it stalled.

I played a bit on that server. Looks very nice. Maybe

It was a conscious decision to not have a clock to keep things simple for the children. The “your turn” is actually automatic so there’s that

I happened a couple of times not to see the bot’s move, which appeared as soon as I refreshed.

First game I tried, against “Medium” computer, as “Black.” Computer didn’t respond after my opening move. Waited a few minutes, nothing. Game #12830.

Edit: after seeing @_Sofiam 's comment, I tried reloading. There was a move.

What if one of the players unexpectedly leaves the game and the other one waits forever?

conscious decision to not have a clock

I haven’t played on there but what about something that asks “are you still here” after some amount of time of inactivity.

Edit: just played a game and thought it was very cute

Is there no sound when a stone is played?

Is it possible to select other languages than English?

Perhaps it might be useful to add a game history, in case the kid wants to analyze them later with an adult?

Is there no sound when a stone is played?

Stone sounds should be there for you, what browser/os are you using?

Is it possible to select other languages than English?

In the future, not right now though 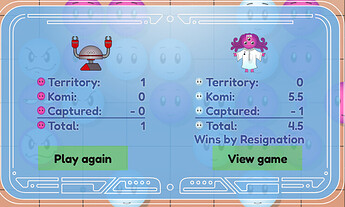 the last move indicator is very bold, so it should have neutral color, not color of your opponent.
Its looks like its your stone while its actually stone of your opponent, very not intuitive

Stone sounds should be there for you, what browser/os are you using?

The first bot move didn’t show up for me until I refreshed, after that the slaughter game continued normally.

Wow this is so fun! I love the faces especially when there’s an atari.

The facial expressions on the stones are a nice touch and helpful too, I think.

I worked through the tutorial until the end of lesson 3 now. I like it very much!

One very minor thing: the tutorial texts have some fade-in effect. That’s nice but the fade-in is a bit slow for my taste.

I killed all groups of easy bot, I pass, but bot keeps doing time stalling moves again and again, I can’t end this game 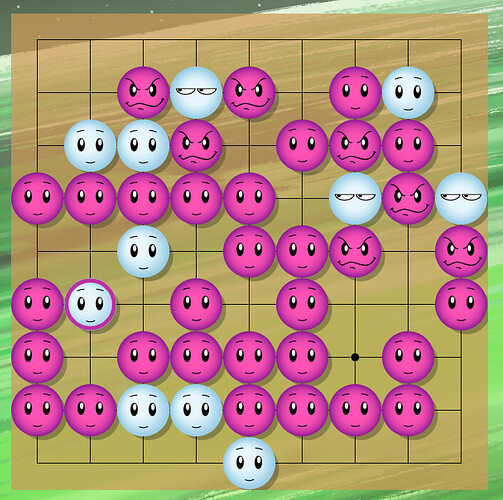 I think you’ll have to continue a bit more. Eventually it will pass. I don’t think kids will mind about the bot stalling. The kids be able to capture more stones (which they love)!