Are neutral points considered scoring or nonscoring under Chinese rules? If scoring, which side claims them?

If neutral points means dame, yes, they score. To be claimed, they have to be filled.

You can’t fill all dame when there is a seki.

If nobody plays them, nobody gets those points.
With Chinese rules it is important to play all neutral points.
At the end of the game a player’s points consist of all points occupied by that player’s stones plus all unoccupied points inside that territory.

Technically, under the Chinese rules, any unfilled dame should be scored as a half a point to each player, but it’s fine to just count them as zero for both.

As mentioned, some dame may need to be left empty due to seki.

Other dame are often filled before ending the game. However, if all that remains on the board are an even number of inconsequential dame (i.e., dame that are not related to any seki, and where filling them does not force defensive territory-filling moves in response), then it can be possible for both players to safely pass without changing the outcome of the game.

Technically, under the Chinese rules, any unfilled dame should be scored as a half a point to each player

This makes sense, otherwise it would break the half point scoring trick they do.

So dame points must be filled, and the stones are considered alive and belonging to the player who is chosen to have their score counted?

yes, points that are occupied by stones are counted as alive.

If the rules are not clear, maybe we OGForumites can try to improve the article

and the stones are considered alive

That depends on how the players mark the status of stones in the scoring phase. Stones are only dead or alive if both players agree (that is the case under Chinese rules as well as Japanese rules).

Technically, under the Chinese rules, any unfilled dame should be scored as a half a point to each player, but it’s fine to just count them as zero for both.

This makes sense, otherwise it would break the half point scoring trick they do.

I don’t think I follow the math here. Wouldn’t it still result in quarter-point scoring either way?

So dame points must be filled

Not necessarily. Dame that are adjacent to seki must be left open.

Also, one does not strictly need to fill in all dame at the end of the game. The players can choose to pass before filling in all dame to save some time. However, it only strategically makes sense to do so when there are an even number of inconsequential dame left on the board.

Consider a (contrived) game that has reached the following position 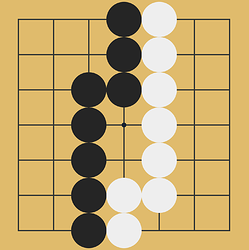 From here, reasonable players might choose to do one of two things:

From the above position, if one player passes, and the other fills a dame, then there would be an odd number (one) of dame left, so the initially passing player should fill the last dame to preserve the margin.

If both players see that there are only an even number of unimportant dame left, they can choose to pass to avoid needlessly playing out additional moves. However, when there is not clear understanding of the situation, or if there is any doubt, players might play out the dame filling to be sure.

I don’t think I follow the math here. Wouldn’t it still result in quarter-point scoring either way?

When you score Chinese, you count one players points. If it is below half they lose, if it is over half they win. But with seki points trapped in dame, both players would have less than half the total board in a close game.

otherwise it would break the half point scoring trick they do.

In practice, you don’t have to actually award the half-point for each dame for using the half-counting method. Instead, people can just count the unfilled dame and subtract it from (361 + komi) to get the total number of points shared between White and Black.

I’ve never heard this one before. I think that area scoring rules are actually much easier to understand than territory scoring rules. I think the only tricky part, for Chinese rules in particular, is being aware of which cyclical patterns can cause a “no result” vs which are forbidden by superko (other area scoring rules, like AGA, NZ, Tromp-Taylor simplify this to just always applying a superko rule and doing away with “no result” outcomes).

By the way, under the Japanese rules, players are technically supposed to fill in all dame (except those that must be left open to preserve sekis), since the definition of seki depends on which stones “possess dame”, which is a phrase that has some degree of ambiguity.

Historical note: I give up trying to understand Chinese rules.

Chinese scoring is easy to understand. Remove all dead stones.

personally i feel like chinese (or some other variant of area scoring) is the most basic of rulesets:

do you control more of the board than your opponent? if so, you win.

(barring seki) Chinese rules are much simpler IRL. You only have to count one side and subtract form 361!

Someone asked me a tutorial about how we count a game in Chinese rule. (He’s going to have to IRL.) The very first thing is to understand what we want to do. We are going to count all together, meaning the stones and the emptyness in the middle of the stones. We count only for one color and then we can see if this color occupies more as half of the board, or not. [Screenshot_2021-09-10-18-10-35-36] Here the game is finished. We remove the prisoners to the stock of stones (bowls), prisoner…

Black’s stones remaining on the board

This can’t be right. Dame points are either unoccupied, or occupied randomly by black or white, meaning that the Chinese score would have a random component.