After finishing the first game here, I am organising a second round of this game.

I created a larger grid than the previous round, because why not, eh?

There are two teams, Blue and Red, each comprised of one team leader and a bunch of guessers.

If you want to join the game, feel free to say so in this thread, then you will be added to one of the teams as an additional guesser.

I generated the following 49 pictures (click to enlarge, a version with coordinates printed can be found below as well): 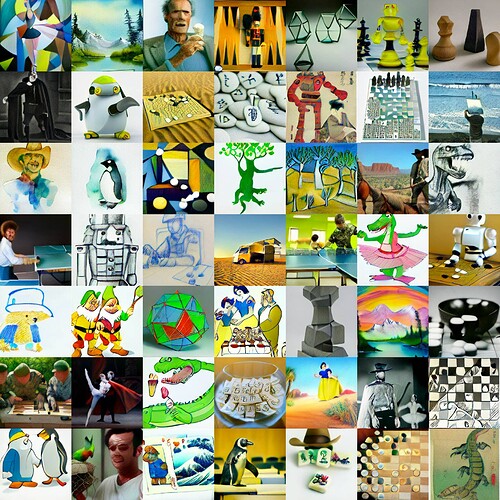 I have randomly generated the following teams:

The rules will be the same as last time, but I will repeat them below.

To clarify, I went with “single words” as a prompt, since there seems to be a preference for that.

Over to the Blue Captain @shinuito for the first hint.

I’ll be away for two weeks starting saturday, so please, dear readers, do join the game so we have more guessers!

Have a nice game everyone!

When @yebellz suggested putting A1 in the lower left, I believe this is the orientation that was intended 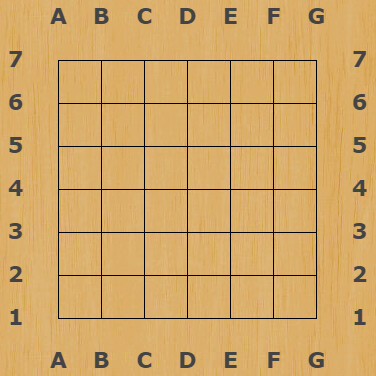 Is it really too late to change?

This discussion remind me of an occasion when we played a blind giant 9x9 rengo during a train ride. Several players asked “wait, how are the coordinates oriented? we haven’t decided”. Then all the mathematicians in the room laughed and we didn’t decide.

It’s not too late, but I’m wanted to go to bed now
And it doesn’t really matter

Ok, I’ve changed the coordinates to align with the goban.

If the number given as a hint is N, then phases 2 and 3 are repeated N+1 many times, until a colour is revealed which is not that team’s colour. For instance, if Red Team Leader has given hint and number “Buildings, 3”, then Red’s turn ends as soon as the Red Guessers have guessed 4 Red pictures, or have guessed 1 Blue, Neutral or Dark picture.

Are we still keeping the N+1 st guess optional as a bonus guess? Like in your example, the red gets three right and then can skip the fourth guess?

Yes. If a prompt is “Word, 2” for example, then the team gets 2 guesses + 1 bonus guess. They can decide to pass at any point instead of guessing a picture.

Over to the Blue Captain @shinuito for the first hint.

Are we still keeping the N+1 st guess optional as a bonus guess? Like in your example, the red gets three right and then can skip the fourth guess?

In the original Codenames rules, the Guessers have to make at least one guess, but all subsequent guesses are optional. That is, at any point during our turn, we can stop if we want. Not just for the final bonus guess.

My obvious first choices would be G1 (dancer in Picasso style); B2 (dancer with red-caped partner) and F3 (crocodile in a tutu).

However, all three are dancers. And shinuito did not say “dancer”, but “dancing”. So I think there is a subtlety.

What do you think, @yebellz ?

I think that B2 is the most obvious dancing image. The others seem reasonable, but maybe the crocodile is not actually dancing.

Another possibility is F2 with a possible ballerina in the background.

So, with the new coordinate system:

the ballet dancer with an extended leg, and a partner wearing a red cape. 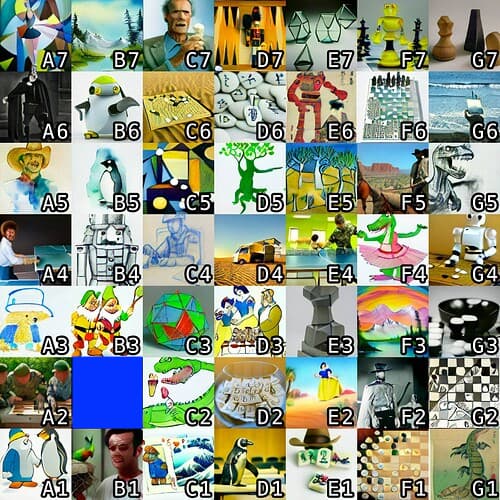 @yebellz should we propose the crocodile at F4? 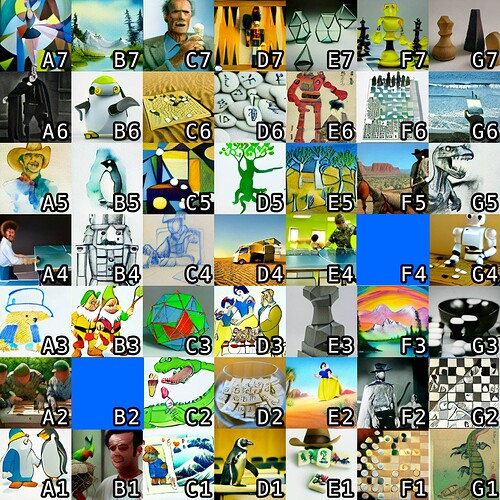