From this thread Controversial Go opinions - #212 by Elom0

Is this like stones that reach the edge of the board should turn into queens or something?

What do queens do in Go? Do they get liberties diagonally and adjacently? 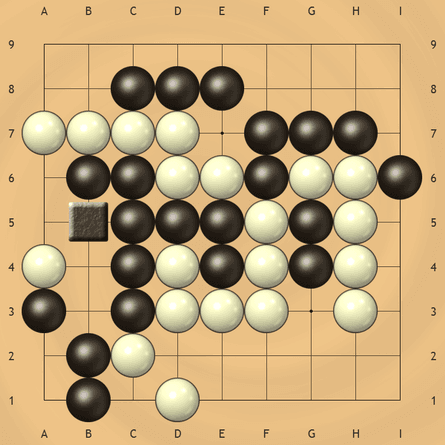 Introduction Yugo is a finite territory game for two players: Black and White. It's played on the intersections (points) of an initially empty square board. Each player must have access to a sufficient number of pieces of their own color. There are...

The game begins with an empty board. The button is placed next to it. Black plays first, then turns alternate.

On their turn, a player must perform exactly one of the following actions:

So there is a variant involving “kings” anyway

This is an interesting idea! Usually edge stones have fewer liberties than “inland” stones but with Go promotion, they’d have more??

Use the extra collected money on schools, playschools, youth activities and childcare. Teach them kids go and other board games somewhere in the process. In 20 years go scene would be booming.

Good idea, but I just don’t think the focus is enough on Go… we actually don’t even need to raise taxes if we funnel funds from the more useless sectors (infrastructure, defense, energy etc).

And anyway, Go is not too expensive- a Go set in every household globally would probably cost less than a trillion dollars tbh

School system is way to biased towards teaching children knowledge they could learn at any age instead of doing the things you can only do at a young age, raise IQ, learn perfect pitch through complex classical music instead of simplistic nursery rhymes, and teaching critical thinking skills which needs to be learned at a young age to defend against falling for fake news a d logical fallicies. On the other hand, rote memorization of knowledge makes one prone to falling for fake news since your brain learns you don’t have to think critically to learn, and it’s even worse when done at a young age. Teaching children simplistic and repetitive nursery without the complex classical music needed to learn perfect pitch lowers children’s IQ and hypnotised them into following orders based on authority rather than morality. At least we could use go to fix it.

At least if toddlers learnt go, it would be a way better use of their time than half of what school makes them do.

Is this really still what’s mostly done in schools in many places? Here it’s not.

It’s kind of a weird example, too. Having perfect pitch is a mild convenience in some specific situations, but that’s pretty much it. It doesn’t make somebody a better musician. And you don’t need to ever study classical music to develop it, either. Some people won’t get it no matter what exposure they had at a young age.

Not to mention that having perfect pitch in many situations can make people miserable - listening to music played using a different temperament than they’re used to can be a grating experience for some, for example.

Interestingly, there are some special cases where it’s possible to “learn perfect pitch” well after the standard age where it’s considered to be possible. A composition/performance dual-major I attended college with has synesthesia, and was able to associate the sounds with colors so well that he can identify notes by color.

Saving such unusual cases, lot of people learn what certain notes “feel like”, especially vocalists, and can develop a functional pseudo-perfect pitch. And many instrumentalists can identify notes played on their particular instrument; I’ve met several pianist who have developed some sort of “perfect pitch” only for in-tune pianos, and violin family players who can identify notes by timbre on their respective instrument. All super cool skills, imo - and all the result of passion rather than forced training at an early age

I don’t have perfect pitch but can simulate it. I know that the lowest note I can sing without too much effort is an E. So I just sing it in my head and then can deduce the rest.

I kinda lost nearly a full octave from my lower register because uh, reasons, over the past several years, and I no longer have a consistent lowest note D:

Yeah, perfect pitch was a weird example. I have perfect pitch for the beginning of the
Heart Sutra. A few months ago I listened to it after an emotionally intense episode, and even now I forgot the name of the note I know exactly what it sounds like.

I’m kind of familiar two other notes from two different likely notes to begin a song I made, and another two from another song I made.

So even at an older age you can easily learn notes absolutely if you have a strong emotional connection to it. Which implies to me that kids take learning about their immediate environment a lot more seriously, and not so much theoretical information taught to them they’re not sure how they’ll use in the future.

Yes, I agree perfect pitch is not the best example. Although I think that while simple songs are important for obvious reasons, complex songs are equally important for children and we shouldn’t underestimate their ability. I do not agree ‘forcing’ children to learn anything, so obviously do not agree in ‘Forcing’ Children to learn perfect pitch, but I strongly believe in opportunity and the availability of musically complex music so that it would develop naturally only in those who would develop it naturally. That’s the neutral approach to perfect pitch. Spoken and Written language can’t be learned if not learnt as a child, therefore it is the only ‘knowledge’ schools should be obligated to teach apart from social morals and cohesion, probably.

I would say that the musical notes are a lot like kyudan ranks, with sente, Komi, being half a stone, a half note, and a full stone being a full note. And there are 7 Dan’s as there are 7 notes!

Thanks, @Gooplet, for the comments on perfect pitch. I was in the process of writing something similar, but instead I will just add a few details.

A basic music school course is Ear Training and Sight Singing, as my school called it. I had it for four semesters. My first-year teacher said that perfect pitch could be trained (she had done so), but it was very tedious and time-consuming, involving simple repetition of A440 multiple times a day every day, for a very long time. The ETSS class did not try to do that, and you won’t develop perfect pitch merely by listening to classical music. The purpose of the class was to acclimate students’ ears to musical complexity (teach them how to listen). The ET final exam consisted of listening to some music and transcribing it. We got to hear it three times (each started with A440 as a reference) at our own pace using earphones. The difficulty increased over the four semesters, progressing from one vocal line to four, lengthening from a phrase to a double period, and using instruments in the second year IIRC. I think most music students agree that it is the most difficult and most hated course, but it really does accomplish its purpose.

Edit: some people are born with perfect pitch, it seems, but it is rare.

going into no-personsland in go territory and promoting go in populations that haven’t heard of it or are not involved
…
We’ve lost the Iwamoto spirit and expect some organisation to do stuff for us, and on that Jeth is exactly on point.

When I launched the Multilingual Go Book Project, I had assumed that it would be players in countries that were in the same situation as mine that would mostly respond to the chance of having an introductory book in their own native language.

What happened instead was mostly the opposite. It was the countries that already had a more established Go scene that eventually had people that wanted to help with the translations, because those countries had a larger pool of players, so it was more likely that one of them would have the time and generocity to participate/volunteer in a free project, even though those countries had other books and manuals available and didn’t really need another one. Despite that, some people there found it useful and I am always happy to learn that our efforts are fruitful. However, there is a lesson to be learned from this:

It is easier to sail into an existing harbor, than land your ship into a totally new shore.

We need to remember that people that want to promote Go are hobbyists and not professional promoters.
Go is my hobby, I am not an author, I am not a professional typesetter, I am not even a dan player, so my book is not much good. But those are the exact reasons why noone really complains much about it

Similarly, the people that want to organise a Go Club or want to teach the basics in a school program or want to print some flyers/leaflets are doing it as part of their hobby, so yes, we can expect them to not be proficient at promoting/marketing/socialising or that they will actively choose to go to places where they think they have more chances of attracting other players, like a chess club.

Why would they choose to make their lives more difficult? It is something they want to do for FUN (after their regular job and despite their other obligations) and of what I’ve read the EGF is just the official body of those hobbists. They do not have huge budgets, they do not get paid a real salary to do what they do (they are volunteers if I am not mistaken) and a lot of them are not trained to do what they do because it is NOT their job, but their hobby.
This is why @Cchristina I said earlier that you are not really teaching EGF any lessons with what you said yo do. It is not a company, they do not have shareholders, they do not have quotas to fill. They are there to do their best for their hobby.

At the end of the day, we should always be aware that there are good reasons why things are as they are and we shouldn’t scoff at them, be snide at the people that are involved or pretend that those reasons do not exist or that they will go away or improve on their own with time:

And so on … Yes! We can all ignore all those things. Yes! We can pretend they are not there, but that won’t change them or make them go away. Thus, any promoting effort, just like any other problem that needs to be solved in the history of this world, needs to take into account the data, the facts and the reality that exists around the problem or simply fail to solve it.

There is a reason why a lot of Go players in Europe are people that are into computers: AlphaGo and the years of publicity around it,

What years of publicity? The first public mention of AlphaGo was in January 2016. There was no publicity at all before that.

It’s hard to quantify the impact that AlphaGo had on the popularity of Go, but I often ask players “How did you first learn about go?”, and so far the number of Go players who answered “I heard about AlphaGo and it made me want to play” is exactly 0%.