Default komi for smaller boards should be higher

The current default komi for 9x9 and 13x13 games is 5.5 for both territory-based and area-based rules.

Through AI analysis by Katago, it appears that the fairest komi for territory scoring is 6, and for area scoring is 7, on both 9x9 and 13x13 boards.

The current default komi is especially unfair under area-based rules where the difference from the (probable) optimum is 1.5 points.

A controversial subject. I personally support the proposed changes.

just to point out though 1.5 point in area scoring is only enough to change a game from tie breaker to tie. It usually doesn’t change the game result excepting certain seki situations, since all single point of control changes effect a 2 point score difference.

I’ve been playing several games with Chinese rules where the komi was set to 5.5. I thought it was a bug. Both my opponents and myself were weirded out by this komi.

Yes but odd-point seki is real, I’ve played many games with seki on GoQuest. Not sure why people are OK with seki games being scored unfairly.If there is a neutral seki point in area scoring and black has 43 and white has 37 white loses a game he/she should have won.

This shouldn’t be controversial, all the empirical evidence shows that 7 is the fairest komi, and that 7.5 and 6.5 are the only acceptable tiebreakers. 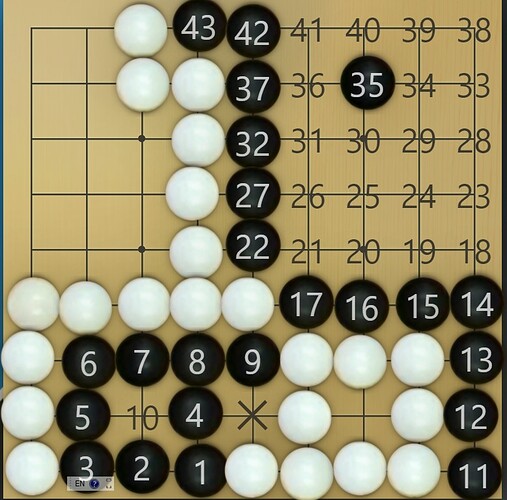 Worth pinging @anoek although he’s shown disinterest in the past…

This argument could also be used on 19x19 area scoring, but that doesn’t mean its acceptable for 5.5 komi to be forced on all ranked matches irrespective of ruleset. If anything, margins of victory are much smaller on average on 9x9, so its even more important that proper komi be reflected.

I’ve played thousands of 9x9 games with 7 komi and have had balanced win rates at 7 komi.

Can someone explain to me why it is even a debatable that komi should be 5.5 under all rulesets in 9x9? Ranked 9x9 games should be able to use different komis just like 19x19 (i.e. 7.5 for Chinese, 6.5 for Japanese, 7 for New Zealand, etc).

You CAN set a custom komi for a 9x9 game.
5.5 seems reasonable to me since an even number can result in a win.
being that a 6.5 komi on a 19x19 is standard it wouldn’t really make sense to use the same komi for a board that is a quarter of the size so i can see where 5.5 comes in.
7 to me seems a little large, especially on a 9x9, but you do you.

You CAN set a custom komi for a 9x9 game.

You can’t for a ranked game (or can you)? It just seems absurd that the 5.5 komi is forced on all rulesets by default, especially with empirical evidence (KataGo self play, GoQuest) showing that 7 komi does not produce imbalances.

I’d love to, but I can’t on ranked

What do you think is the fair komi on 5x5?

5x5 is solved and black just kills white, so it would be 25 points in order for the game to be balanced.

Yes. I was replying to

Default komi for smaller boards should be higher OGS Development

The current default komi for 9x9 and 13x13 games is 5.5 for both territory-based and area-based rules. Through AI analysis by Katago, it appears that the fairest komi for territory scoring is 6, and for area scoring is 7, on both 9x9 and 13x13 boards. The current default komi is especially unfair under area-based rules where the difference from the (probable) optimum is 1.5 points.

It’s worth noting that with area counting, 5.1 komi is no different from 6.9 if there is no seki. So if a tiebreaker is desired then 5.5 is okay. (But I guess everyone would agree 8.5 komi is ridiculous although it is kinda the same thing as 5.5 just with the favored color switched xD)

it goes to show how sometimes our intuition fails us.

you read a logical, laid out proof about how komi from 5.1 to 6.9 would give the exact same game result, so it doesn’t matter as long as it was within that range. you accept that as bonafide mathematical truth.

but then you play a stressful game with komi 5.5 that ends with black+0.5. and if komi was 6.1 you would have won. your win is stolen. logic be damned, it’s obviously broken. it must be godel’s incompleteness theorem at work. nevermind that the game was played with japanese rules.

GoQuest uses chinese rules so to compare with japanese rules, need to deduct 1 point. 7-1= 6 which is veey close to 5.5. I suppose 6.5 might also be reasonable, but 5.5 is probably ok.

I think OGS should use the same Komi across board sizes by default. The argument is effectively settled at this point as to what Komi “should” be. If people want to deviate from the norm then there are custom games for them.

Why is there a new thread on the same subject? Isn’t this one good enough, Default komi for smaller boards should be higher?

Because making 1 thread doesn’t seem to get things done. So maybe making 10 threads will.

I actually thought of doing that by way of mockery, but I didn’t think any one would notice.