Continuing upon my series of variants that begin with “D” (Diplomatic, Democratic,…), I would like to propose a new variant that I call Detective Go, which I think will also make for a fun forums game.

The basic idea is that this is an asymmetrical variant with a team of detectives trying to find and eliminate a fugitive that plays hidden moves on the board.

On the detectives’ turn, each detective may choose to either pass or attempt to place a stone on any (visibly) empty intersection. The detective team is allowed to publicly discuss (in view of the fugitive) their moves and strategy. If a detective’s attempted placement happens to be on a hidden fugitive stone, then the entire chain connected to that fugitive stone is revealed. Any future fugitive stones that connect to a revealed chain will also be revealed. After placing the other (non-colliding) detective moves on the board, first any fugitive chains without liberties are removed, then any detective chains without liberties are removed.

The game ends when any of the following conditions are met (in order of precedence):

Let’s use this thread for discussing the rules and amending them, if necessary, and to recruit for the first game. The actual first game will be played in another thread. I will both host and serve as the fugitive in the first game. In order to keep track of the actual game state (including the hidden stones), the full board will be shown in a kibitz thread, while the redacted view for the detectives will be shown in the game thread.

Thoughts? Any interest for joining the first game as a detective? 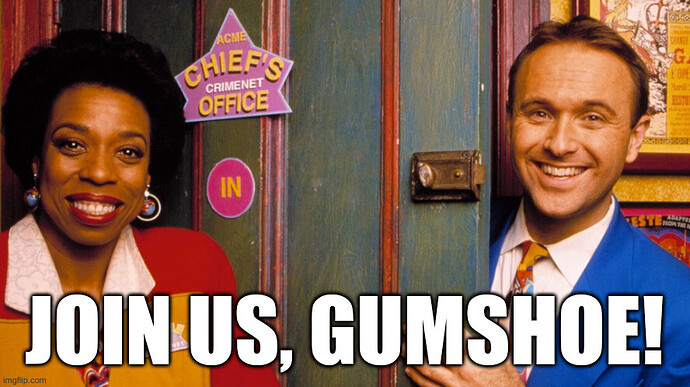 I imagine the balance hinges on the number of detectives and the size of the board. What do you think, how many detectives would be fair on a 19x19 board? With four detectives I imagine that the task of the fugitive (creating five eyes) is very difficult.

Great! Glad to have you in the game.

I think tuning the size of the board and number of detectives will be tricky. We’ll probably have to just play some games and see how it turns out. Let’s see how many detectives sign up (or maybe I should cap the first game at 3 or 4 or 5?) and then pick a board size. I do not mind having a tougher game as the fugitive.

I actually think that 19x19 might be quite playable for the fugitive against 4 detectives. While it would be impossible to make five eyes if the stones were all revealed, I think the fugitive might be able to leverage their advantage of playing hidden stones.

I’m not sure if the balancing is fair, but we probably have to try it out to find possible flaws.

To make it fairer, we could do board-size bidding: each player gives up a board size, and the person who is willing to play fugitive on the smallest board will become the fugitive.

I could give it a shot

I like @Vsotvep’s suggestion for komi bidding. I’ll bid 17x17 for playing as the fugitive.

Another question: which color would you each like to use? Check out https://vsotvep.github.io/MulticolorGo.html for the palette.

Assuming this is for three detectives. I would rather play detective than going lower

I kind of want to play detective too.

I’m really curious to see how the capturing mechanics plays out.

It would be interesting if (I understand correctly) the detectives played some moves which turned out to be self atari because of invisible fugitive stones. One only sees fugitive stones by playing onto them (kinda like battleship?) rather than just playing beside them right? They’re also not revealed if the fugitive stones take part in a capture right? (not like those hidden move variants)

Right, so does this mean that N eyes + one Ko-shape is enough for the fugitive to live? (where N is the number of Detectives)

As @shinuito pointed out, there’s nothing to prevent cycling the board position, but repeating a board position for the third time (which could also happen due to passing), immediately ends the game. This forces the detectives to kill all of the fugitive stones outright, rather than getting into some sort of loop.

Right, so does this mean that N eyes + one Ko-shape is enough for the fugitive to live? (where N is the number of Detectives)

Perhaps, I think so.

I’m fine with @yebellz being the fugitive as well, on 17x17.

It looks like we’re all set with me being the fugitive on 17x17, so I’ll start the game soon.

As for timing, would 24 hour turns be okay with everyone? Actually, I think that we could proceed much quicker. If all of the detectives come to consensus on finishing their turn, just tag me with an @-mention and I’ll advance the turn. I will try to play my own turns much quicker than 24 hours (probably less than an hour, when I’m available).

Ok, the first game has begun!

This is the first game of Detective Go (see rules in that thread). The Detective Team @martin3141 [green] @Vsotvep [blue] @shinuito [yellow] The Fugitive @yebellz [red] The game has begun (the fugitive has made his first hidden move), and it is now the detectives’ turn with this visible board: [image] Demo board link

Detectives, please keep all discussion about strategy and tactics for that particular game within only that thread.

Rules clarification and general variant discussion can be held here.

If anyone wants to kibitz, please let me know, and I’ll add you to the kibitz thread.

As @shinuito pointed out, there’s nothing to prevent cycling the board position, but repeating a board position for the third time (which could also happen due to passing), immediately ends the game. This forces the detectives to kill all of the fugitive stones outright, rather than getting into some sort of loop.

Maybe that could be reworded slightly to align with what you mentioned above. I was reading it like “If the board is the same as a board two turns ago then the fugitive wins”. Although now that I look at it, is two previous turns (2=1 detective+ 1 fugitive) or (2=2 detective+ 2 fugitive)?

What I was imagining could happen for example maybe the simplest case:

say 3 detectives: two detectives accidentally suicide in some fugitive eyes and the third takes a ko.

Then the fugitive retakes the ko and wins?

but repeating a board position for the third time

The bit about the third time is confusing

A “turn” means a turn of play by either the detective team or the fugitive.

say 3 detectives: two detectives accidentally suicide in some fugitive eyes and the third takes a ko.

Then the fugitive retakes the ko and wins?

I think this would only cause the board to repeat a second time, which would not end the game.

However, with the current wording, the game might also end if all of the detectives either accidentally suicide a single stone or fail to place a stone due to colliding with a hidden fugitive stone, since that would repeat the board state, and then the fugitive could just pass to repeat the board state a third time.

Maybe we should amend the rule to say:

Is that okay with everyone? Okay, I just went ahead and amended the rule (it only makes the game slightly harder for me).

I guess one question is: According to the rules, does revealing a fugitive chain change the board state? (and hence prevent the “superko rule” from taking action. This would make sense to me because information is revealed to the detectives, which is a significant change)

I was not envisioning it that way. I was thinking of “board state” as being the true board state that the fugitive sees.

Ultimately, the superko rule is just meant to prevent the game from possibly cycling somehow, and I did not mean for it to necessarily cause a premature game ending, so I’m flexible to amend that rule somehow.

How exactly would you express your proposed rule? What do the other players think?