I just learnt about fantasy football, so here’s a silly idea of a forum game:

Then a couple of weeks long, we simulate a Footbaduk competitions. Each week we simulate a round robin between all teams. If a pro from team A wins a game against a pro from team B, then we interpret that as team A scoring a goal. Every new week counts as a new footbaduk match, and in the end we look whose team did the best, i.e. won the most matches.

In the end, the purpose of the game is to have fun, cheer for some pro’s you might not know yet, and to have a reason to look at interesting pro matches.

Who wants to join?

I love this idea. My vote would be Korea, so I can choose Choi Jeong

What are rules around team construction? Is it first come first serve, or multiple teams have the same player?

It seems like something should be done to account for how active a particular professional is, since it seems incentivized to select those that play a lot of games overall, rather than just those that might be stronger. With scoring requiring a head-to-head match up of pros on two different teams, there might be much fewer opportunities for points to be accumulated and much more imbalance in activity.

I think that team construction should be considered as well. Maybe we should do some sort of draft?

How would a draft work? Would we select a predetermined pool of players, choosing by win rate and frequency of play?

We’d first figure out who’s participating in this “league”, and then we’ll take turns selecting pros until we’ve filled up our teams. This is just a mechanism for selecting pros, if we are playing in a format where each pro can only be on one team at most.

After the draft, the remaining pros are “free agents”. If a participant feels that a particular pro is under-performing, then they could even drop that pro and pick up another free agent. Maybe even trading between teams should be allowed. That is, if we want to add the complexity of allowing team modification at all.

another thought I just had is that with the round Robin format, maybe if we find that 11 players is too few, we could have larger teams to increase the likelihood of matches? Even if only one game happens in a given week between two teams, that’s enough to decide the footgo match. Personally I think it would be more exciting to have our teams playing against each other rather than just counting any games they play, but I concede that might be the only option.

My reasoning there is that we’d have specific Go games to watch, which could resemble watching a sportsball match of some kind?

Maybe a hybrid system could work, too - use the +1/-1 system you mentioned, but then +7 for wins against the opposing team. (the 7 might be arbitrary, but I remember American football using that number for goals from my marching band days)

Maybe the name should just be “Fantasy Baduk” (or Go or Weiqi)? The Fantasy concept applied to other sports just follows the pattern “Fantasy [Sport Name]”.

Another somewhat different format is to just arrange it like a “pick 'em” game. In the time period of each round, we identify a set of interesting top-professional games. Each participant in our forum game selects who they believe will win in each game. Points are awarded for selecting correctly. However, the downside here is that we will not have head-to-head matchups between participants, and in some cases, we might all have quite similar picks, resulting in our league being decided by fewer toss-up games.

So, let’s consider another sort of format that modifies the above procedure. For each round, in each match up (between paired participants in our Fantasy Baduk game), we have the two participants take alternating turns selecting the winners of each professional match.

For example, suppose @Gooplet and I are facing off in round 1 of Fantasy Baduk, where the organizers have already identified a set of 10 professional games to watch this [week/month/fortnight]. We flip a coin to decide who picks first, and then we take turns picking the winner of each game. Suppose I won the coin flip, then naturally, I would guess the winner for a game that I felt most confidently about (which assigns @Gooplet to picking the opponent). Next, @Gooplet would pick the winner for another game, and we’d proceed alternatingly, until we’ve each picked the winners for all 10 games. Likewise, other pairs in our Fantasy Baduk league would also pick the winners for the 10 games.

Maybe we could have a round-robin regular-season, followed by a post-season playoff bracket, with single-elimination to decide the ultimate champion of season one of Fantasy Baduk. If we go with a two-week period, then we could call the whole thing “Fortnite Battle Royale”.

Maybe the name should just be “Fantasy Baduk” (or Go or Weiqi)? The Fantasy concept applied to other sports just follows the pattern “Fantasy [Sport Name]”.

Or - hear me out - “Fantasy Footbaduk”

In the time period of each round, we identify a set of interesting top-professional games.

I don’t understand, how are these selected? By the participants, and then they only bet on games they didn’t pick? Are they all games that have already happened, or games that are scheduled for the coming week? I don’t really understand the modified suggestion, either; do we know the player names and when the game took place?

I feel like the lack of team building makes this feel a lot more like betting on pro games than a Fantasy Football-esque thing.

After reading a bit more about how scoring in fantasy football works, I like your earlier suggestion of

during the time period of each round, each win by a player on your team counts as +1, while each loss counts as -1.

but I think there should be more score modifiers than just winning and losing games during the period of the match.

OR, if everybody agrees that your non-team-oriented idea is better, maybe we could do more with it than just get points for winning games. Maybe we could also look for things that happen during games; in fantasy football, you get points when your player runs a certain distance or passes the egg a certain distance or scores a goal or something, and you lose points when your player fumbles. Maybe rather than win/loss determining who gets points (or in addition to), we could also get points for our players finding the top AI move in the middlegame, or lose points for blunders, or gain points for captures, etc.

These kinds of things, I think, would make actually watching the game relevant to the fantasy footbaduk league

I don’t understand, how are these selected? By the participants

The games could be selected ahead of time by the organizer, which could also be a participant as well. It could be done via some simple procedural rules, like saying something like “all games within these specific tournaments/leagues”, possibly with some filtering ( such as excluding games among only players outside of the top X rankings), if we want to reduce the size of the list further.

Maybe we could also look for things that happen during games

I think this would be really cool, but it greatly complicates the data gathering needed.

If we’re only looking at 10 preselected games, it wouldn’t be a whole lot of work to do it by hand if we just agree to certain katago settings and grab the performance report from KaTrain 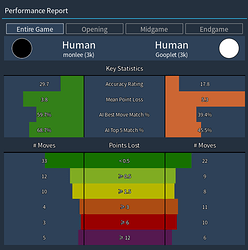 Depending on the number of games over what period of time, though, it could certainly be a burden to do it this way.

I still feel like there needs to be some greater sort of long-term selection aspect for it to really be a “fantasy” game. Otherwise it’s not fantasy at all

Going back to the original round robin idea, since it’s a round robin, it’s likely okay if matches end in a tie for some of the weeks due to lack of games. Alternatively, if teams don’t have games against each other that week, we could default to some other scoring method like just tallying the number of wins each team has at the end of the week.

I feel this would remove the competitive aspect where you can cheer for your team against that of an opponent. I think the aspect that your team is competing against other teams is one of the more interesting parts of the idea.

Maybe a hybrid system could work, too - use the +1/-1 system you mentioned, but then +7 for wins against the opposing team. (the 7 might be arbitrary, but I remember American football using that number for goals from my marching band days)

I was personally thinking of the kind of football that involves mostly touching a ball-shaped object with your feet, instead of the one involving carrying an egg across a field.

Having little or even no goals in a match is not necessarily a problem, but perhaps a different way of dealing with a lack of games, is that we let a single match take a month instead of a week.

I’d prefer that over increasing the team size, only counting wins / losses by players or flipping coins for a determined set of matches, since those solutions remove either the aspect of cheering for your own predetermined team, or the aspect of competition between teams of different participants.

In any case, we can iron out details later.

Who wants to join this?

Let’s gather team captains before the end of October, and assign pro’s to teams before November, then we can start the game at the start of next month.

Let’s gather team captains before the end of October, and assign pro’s to teams before November

Is there a difference between these two deadlines?

Yes, two or three days is what I imagined

We did this once before! It died, sadly.
Fantasy Go League! - Announcements - Online Go Forum (online-go.com)

I’ll do my utmost to keep this one alive, then!

Or - hear me out - “Fantasy Footbaduk”

I think I prefer this pun, so I’ve retconned it into my first post

We did this once before! It died, sadly.

Sooner or later, all go inspired variants seem to die. In the beginning players are enthousiast, but as time goes by the enthusiasm fades away, players drop out and the game comes to a halt. The same goes for not go inspired forum games.
Incidentally forum games have a second life.

And if I venture to speculate about it, I think that go inspired variants are too complicated compared to the simple rules of playing go.

On the large scale of things, everything will come to an end eventually.

I personally don’t play variants in the hope of playing them forever, just as a change of environment. It’s fun to have to think about things you haven’t thought about, and Go variants offer that kind of fun for me. They don’t need to last.

Also, I disagree that Go inspired variants are too complicated compared to the rules of Go. Variants like double-move Go, simultaneous-move Go or multicolour Go don’t have more complicated rules. Neither does playing on a different board.