I would like to make a poll to see who is the most popular Go player here (I’m thinking 2 polls, pros and beloved prominent amateurs), but I don’t know enough players.

I will take all names from the next 24 hours or so for the poll only, but of course everyone can keep adding after that.

Note 1: There’s a similar post from 2014, but I thought the change of decade warranted an update.

Note 2: Please don’t provide just lists of players from sites etc. My point is for each of us to share their personal favorite, and why they think so.

However, I like these two from their rivalry and jubango

Another great part of Lee’s career was his rivalry with Gu Li, which reached its pinnacle in a jubango (10-game challenge match) in 2014. It was a real joy following this jubango through GoGameGuru’s coverage. Although GoGameGuru is now unfortunately defunct (and its domain name has been taken over by a spammer), I was able to find the old coverage archived on the Internet Archive Wayback Machine: This page contains working links to other archived pages, two for each game (one to announce th…

But my favourite player is Cho Chikun, not just his creative way of playing Go, but also the whole persona around it.

I think I won’t be alone, so let’s offer a second name as well: Kobayashi Satoru. I just like his face. And the anecdote that he got suspended for accidentally injuring his opponent by breaking a brandy glass while drinking together in between sessions. I’ve only seen a couple of his games, but that’s long ago, so I have no idea of his style.

Here’s a game between the two of them, mentioned on senseis library for the fact that Cho Chikun managed to live on the right side, against all odds.

I plan to delete the placeholders and add the new ones, edit the post not the poll.

I don’t know many pros but I’d add Shibano Toramaru because he’s tiny and cute and kicks ass at Go.

I like Honinbo Jowa and Honinbo Shuei because they were both the best in the world (Jowa in the 1820s-40s, Shuei in the 1880s-1900s) and had very different approaches to the game.

Jowa consciously tried very hard to create a fighting game in which he could force his opponent into a complicated struggle, in which he could overcome them with superior reading. Shuei played what’s been called “No-Power Go”; in the words of Takagawa Kaku, “the art of winning without appearing to do anything at all unreasonable”, achieving victory with a natural series of apparently simple moves.

We all love Cho Chikun, but let’s not forget Takemiya and Kobayashi Koichi, two other very strong players of Japan’s dying years of Go dominance, each with their signature style.

A more modern player I like is Yamashita Keigo. Especially in the 2000s, he was a powerful and committed attacking player who placed great confidence in his ability to pressure and even kill weak groups.

Poor guy, his quote gets a mention, but he doesn’t get a vote.

He’s a famous name, but I’m just not familiar with his games.

Shusaku. Go read “invincible” a must have book in english.
Fujisawa Shuko. I bet he could still win any poll like this one coming. He had a so nice intuition and personality (could still win top match when older and his blunders made him even more familiar)already a favorite for his popularity between amateurs players.

The mention of Takagawa Kaku made me curious, so I’ve been checking out Sensei’s Library. Takagawa won 17 titles and was 17 times a runner-up. Having won the Honinbo title in 1952, he then proceeded to defend it successfully eight years in a row. Thirty-eight years would pass before Cho Chikun would break that record.

His restrained and peaceful style contrasted dramatically with that of his great nemesis, Sakata Eio, who favoured a more provocative game based on exceptional reading ability. They faced each other a whopping 97 times, with Sakata winning 74 of those matches. This was Takagawa’s great misfortune; that he repeatedly went up against this go juggernaut named Sakata.

So yeah, Takagawa’s name doesn’t come up these days nearly so often as it deserves. But then, you could probably say the same for Sakata. Time passes.

Update: Poll is now up.
I got no amateur names, so it’s just the pros.

(I hope I didn’t forget anyone)

I’d like to give honorable mention to Hajin Lee 4p and Yeonwoo 2p for their English go content.

Where is Lee Changho? When I was looking for someone who could be deemed GOAT in go, he was the only name that stood out to me, considering his long running place at number one in modern times. 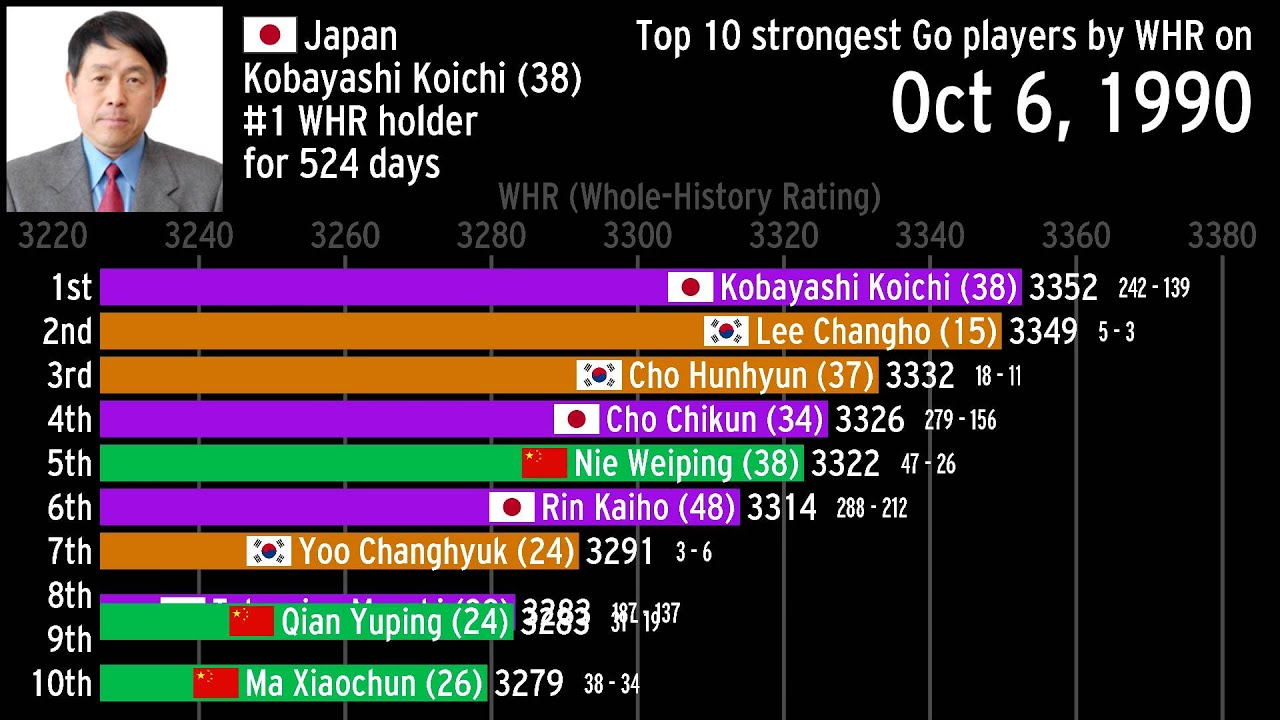 I don’t think I have a favorite

There’s probably more but off the top of my head

Iwamoto Kaoru. Opened the go centers in South America, US and Europe. Wrote “go for beginners” before others.
Well poll is closed, but I had to mention him.
And there are a bunch more.

To be honest, I don’t even know any go players other then lee sedol, cho chikun, and shusaku

. I’ve heard a little bit about the others in topics from a long time ago.

Guess I should study go history instead of forum history.

No reason you can’t do both

You could make a go history thread (if one doesn’t already exist and isn’t locked). Or even just a pro game sharing thread, where people share their favorite Pro go games, sgfs, demo/uploads to ogs of the games, videos or written commentaries of said games by pros or amateurs etc. Could be a way to get an idea of other players and their styles.