You can choose your own avatar (profile pic), have a choice from multiple board backgrounds, can create your profile user card, but the general background (theme) of this website is either white (day) or black (night).
I would love to be able to create (customise) my own background theme, although I won’t sleep a second less than I do when this turns out to be impossible or has low or no priority. 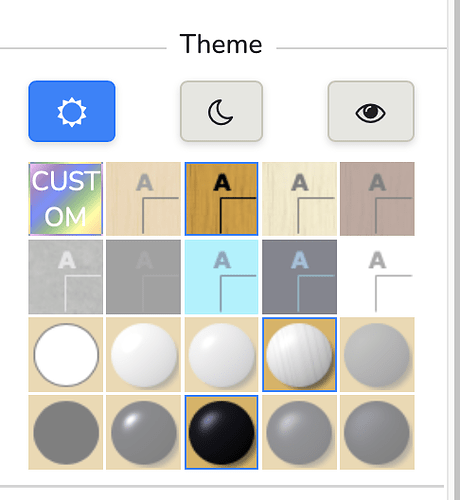 i am not much of a programmer, none at all actually

What do you have in mind for “customize my own theme”? Do you just mean “have a different background”?

The ‘theme’ itself is a lot more than just the background: when you change theme you change every single colour presented to you…

Exactly - that is what scripting is for! Some users are known to have written scripts to enrich the chat experience (like assigning a different colors to lines from different users, etc)

You can save the script as a bookmarklet… and voila, you have your feature at your fingertips

“have a different background”.

save the script as a bookmarklet

It’s even easier to just use a browser plugin which will make it automatic, no clicking bookmarklet needed. I do this to customize the stones and also the background color (to mimic Go Kibitz) 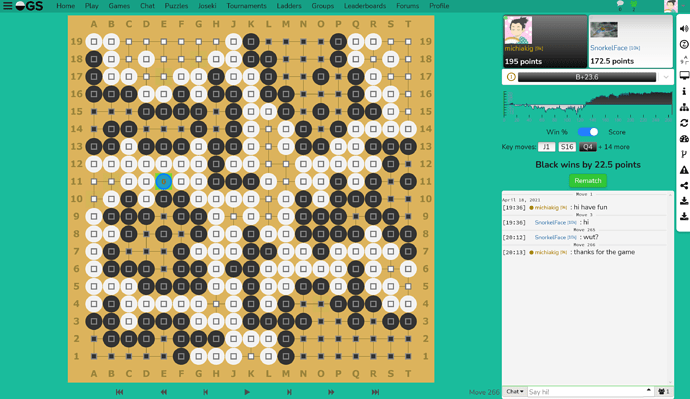 I use Tampermonkey because I need to inject JS but there are plugins for only injecting CSS, I’ve used Stylus for this in the past Stylus – Get this Extension for 🦊 Firefox (en-US)

Here is the CSS to customize the background and top bar colors:

To use this with Stylus you’ll want to go to online-go.com and click the extension and then “Write a style for” just the domain (instead of just the page) And then paste this in to the text box that appears.

You can edit the colors and pick something else using CSS color values:
https://developer.mozilla.org/en-US/docs/Web/CSS/color_value

@Atorrante do you want colours, or pictures (like the custom goban background has the option for putting a picture in it)?

Probably pictures.
But to be honest (1) reading @michiakig’s post and (2) totally not knowing what that is all about (zero experience with programming at all; not even Basic) leads to (3) best leave my background the way it is.
Thank you all for trying to help.

Another yesyesyesno moment! *shakes fist at the sky *

Someone was working on something like that. Don’t know what happened to it.

Related Should we have a contest for new themes on OGS?

/me has been asking for more themes for the last 5 years ._.

TBH the guts of the code doing themes pretty much assumes that 2 shall be the number there shall be 2 themes, do not pass 2, even to go momentarily, to go to 3 lest thou be devored by rabbits.

The “accessible” theme is kind of hacked in there on top of that. (Ok, thou may count to three, despite how ugly that is, but thou shall not proceed to four!)

On top of that, the “theme selector” will need work to be able to offer more.

That said, messing around with how things look is kinda fun.

But what do you really want? Pinks? Greyscale? I’m fine at putting things in place but bad at selecting colours… someone else would have to do that.

Probably pictures.
But to be honest (1) reading @michiakig’s post and (2) totally not knowing what that is all about (zero experience with programming at all; not even Basic) leads to (3) best leave my background the way it is.
Thank you all for trying to help.

I think @michiakig 's post was not really directed at you, because you said “you are not a programmer” and his answer was for someone with at least a bit of knowhow - it probably just illustrates for us who do have that what we’d need to take care of.

However, I did experiment with pictures, and it’s not really going to work. Unlike the goban, which only has two foreground colours, the site as a whole has a whole range of forground colours, which disappear into any picture you put in the background.

I have “feature request”.
NO MORE NEW "FEATURES"
until bugs that have been outstanding for years have been fixed.

Then I’d become a supporter again.

I think that’s not unreasonable, but…

if there’s only one person who can fix most of these bugs (namely anoek on the backend) while most of the new “features” are front end requests, where anyone can contribute and many have been generously doing so with their time, I don’t see the conflict in allowing the “new features” to go ahead.

I have been an on and off user on OGS, so I am only slowly coming across bugs or features. For people like me, or even just for reference - by any chance do you (or anybody else) know if there is a list or a thread discussing which bugs have been outstanding for years? Or a thread that makes it clear which is the most annoying bug for a lot of people? Or do you refer to the Issue list on Github?

We re going a bit off topic but to answer, I didn’t see myself any bug list to solve, besides what is on the GitHub.
So in this example I didn’t hear about that bug and didn’t provide directly the right answer, and in a more extended view, the opener didn’t know either.
A thread in the forum listing the resolved or not resolved bugs would not be a luxury, and less obscure as going to check in GitHub.
When I went checking into the Github on this issue, I noticed that the issues is a huge list of suggestions mixed with bugs, and that the project is not organized to separate them either and looks quite incomplete as I didn’t find this bug in it.
In my own opinion bugs (and especially this kind of bugs) should be quickly solved before putting new suggestions at work. Let say that a strong player with a good knowledge to share comes and agree to play a 1stone handicap with w but get a 1stone with b against a weaker player, well, that’s embarrassing.
It’s a problem for anyone surprised to play at a wrong handicap too, and even for beginners as you need to explain them to not use the automatch but to configure some custom settings…

Note to mods: These last posts may be separated and regrouped in a new thread like “listing of OGS bugs?”

The most annoying bug for me is the scoring bug. A drawn game is scored as a win for one side instead of as a draw. (Draws are most common in rulesets which allow integer komi, but can also happen under Japanese rules, e.g. in the case of triple ko. Rulesets which don’t completely prohibit repetition of the position, i.e. only prohibit the simplest case - immediate recapture of a ko - allow indefinite repetition in a variety of ways, though they rarely occur in practice.)

Jigo implementation / bug not even assigned