Since yesterday I’ve been parsing some data with the API and I got a raw statistics page up and running locally.

For a player with 600 games, it takes about 20 seconds to parse the results.

The app is not hosted online yet. 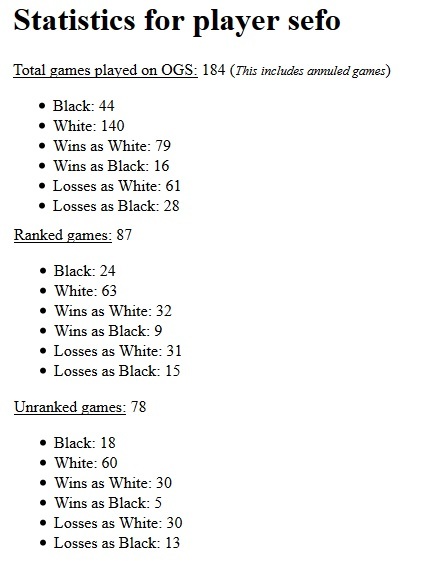 Getting the app hosted is a probably a priority so that people can try at home.

I haven’t figured a quick and easy way to get the user ID from the player name, so you will need to know the user ID of the player beforehand (you can find it easily in the user profile) and input it in the form at the top of the page.

The script might take some time for players with lots of games. Be patient.

The total games stats at the top may differ from the profile page because they apparently include annulled games, draws and ongoing games.

Nothing fancy, no loading screen, no progress bar.
The script doesn’t store any information.

Probably more to come in the future.
If you’re a developer and want to improve it, let me know.

This is very nice!

This is very cool, thank you!

I for one would like to have ALL stats

perhaps selectable w/ checkboxes? I sure could add the numbers myself, but I’d really also like to see “Losses total” and “Wins total” in each of the categories

I thought about the checkboxes as well.
When I add more stats (for tournament games, corres, handicap, …etc.) I’ll need to find a way to organize everything better.

PS I just added the total for each category.

PS I just added the total for each category.

Say, @sefo, would it be possible to create that pages with an url, so that one could just put one’s User ID in there? Would be easy then to send somebody a link like this one

@sefo, can you also make me rich, attractive, somewhat younger, very smart, and 9 dan, and gimme some super powers?

Haha this is really cool!

Oh and win/lose percentage would be nice too I think

Yes, percentage is the next thing I’m going to add.

But I need to figure a way to display all that information while keeping the page readable. Maybe it’s time to include some ajax and make it possible to show/hide details (popups or sliding divs)?

I can help with the front end stuffs if you want, since it’s my main spec.

I find in my OGS profile that my total game played is 57, while on g0t stats it’s 74. Is it because OGS profile does not count annulled games?

@AVAVT Correct, annulled and unranked games are not counted in the OGS profile while the total count that I get from the API shows everything you played. It’s something that I could fix, but I think I’ll keep the full stats in the top section.

So you have 57 ranked games played but on your profile, if you scroll down you can see the paging and it shows x out of 74 games.

I also think that the API total of games shows ongoing games but I haven’t verified this yet.

@AVAVT re the front end stuff, do you want me to send you the file so you can take a look?
Luckily I separated the main code in a class, so the html contains very few code.

I can also send you the ftp details since it’s a free host and there’s no personal information on it.

Sure, whichever is okay to you.
But since it’s your app I think maybe you can tell me how you want it to be and I’ll try to make it like your description

Amazing job AVAVT! I’m so grateful for that. It looks very clean now.

People take a look and give feedback

Some information from feedback I received:

The server I am using at the moment is limiting the traffic if too many requests are made. So if you get a temporary service unavailable error, just try again a few minutes later.

@AVAVT, @sefo, you folks are awesome!

Two things:
• First, I don’t understand the first B/W pie in every section

• Second, while I really like the pie graphs, I’d also dearly like to see the numbers there.

So I need to hover the mouse over the pies and then everything explains itself.

OK, this is really beautiful and stylish, but can we please have the numbers visible at all times? It makes comparison so much easier if I don’t have to memorize numbers

Also, I think it would be a good idea to have both: absolute numbers and percentage.

And, @sefo, can you perhaps add a PayPal button so we can contribute to server/traffic costs?

Did I say you’re awesome? Thanks again!

Yes you’re totally right on both the number display & percentage. I tried to do so but it can’t be made quickly, so I had to leave it for tonight when I have more time T_T

I just have to reload again and again b/c IT IS SO FRIGGIN’ BEAU-TI-FUL!!!11eleven
And the animation is SO sexy!
(Steve Jobs would have said, “it’s so beautiful you wanna lick it” :-D)