"Games where it's your turn" icon missing

I noticed today that the icon that shows up in the top right, a white stone with a number indicating the number of games where it’s your turn, is no longer appearing. I’ve checked on multiple browsers and platforms. Are others seeing the same? Was a site update deployed recently? I don’t see any console errors. 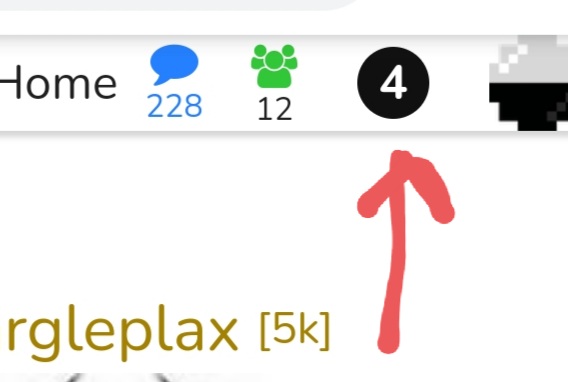 This thing? I’ve still got it (Chrome, Android)

possible other people have it, but I thought I should share the data point that I don’t have this issue

You sure you have moves waiting?

It has been an on and off problem for almost a year now I think.

Yes, I’m sure I have moves waiting (well, not at the moment, but I’ve had plenty of turns today and it’s not shown up). I’ve been using my home page to find the games where it’s my turn, instead of clicking this icon like usual.

If it’s an off-and-on problem, does it just resolve itself after a bit?

I don’t remember if some programmer attention needs to happen, because the first time it happened it was a bigger issue, or if server self-corrects after a while.

I don’t know how widespread it is, not everyone is affected each time.

[image] Anyone else? Just me? I just refreshed the page and it was gone.

Not sure if this was mentioned in the other thread (I read a fair bit, but it’s long and discursive), but the other bug that seems to go with this is that after I play a move, it doesn’t automatically take me to the next game where it’s my turn, like it does usually.

Heh welcome to the OGS Forums

That’s so weird about you experiencing this bug though. I would have thought at least one other “victim” would have chimed in by now.

Might be worth checking the Auto-advance settings, but I doubt that’s the issue

Just to be sure, are we taking about the indicator showing 0 or the whole thing disappeared?

The whole thing has disappeared.

That’s so weird about you experiencing this bug though. I would have thought at least one other “victim” would have chimed in by now.

Not entirely sure, but I think I might have had the problem for a very short time yesterday (maybe a minute or so). I assumed it was maybe just some request getting through really slowly.

I had temporarily this issue in last days. I couldn’t say exactly when.
It recovered by itself or so it seemed to me.

There were some server issues yestarday. If it is now back for you, that was probably the cause (and sorry about that).

If it is still an issue for you even now, it is quite possibly local, as I am not aware about any similar reports currently, I would try the traditional ctr+f5 to refresh without cache in case something got corrupted during the time, disable adblcoks or other extension (we have no ads anyway!

And well, let us know how it went…

What would be a Ctrl F5 on my Android phone?

Unfortunately quite a bit trickier on mobiles,

depending on your browser of choice it is usually somewhere in the settings, but you risk deleting cached stuff for other websites
chrome:

Refresh your cache in Chrome on Android - Refreshyourcache.com

It remains an issue for me. I’ve cleared my cache and done a hard reload, to no effect. As I mentioned, I’m getting this across multiple devices with different platforms and different browsers (Windows, Mac OS, Android, Chrome, Firefox). Especially given that the auto-advance feature broke at the same time, it seems much more probable that this is a server-side issue (I’m also a SaaS developer, so this is a professional educated guess too, albeit a black-box one).

If you’d like, I could inspect network payloads in the dev console to try and help confirm this. Could you tell me which HTTP request should have the relevant information in the response, and what that should look like if the server is behaving as intended?

Given that many folks report this sorts itself out after a few days, my best theory at this point is that there’s something about the state of a particular game that causes it, and that once a move is played in that game, maybe that clears it up. Best I can think of (and hope for).