I’m sure some of you who are more active in OGS chat have come across an idea not unlike our experiments with Go Diplomacy. A group of go players playing a Table Top RPG online.

Originally this came across with Jmdingess offering to DM, but it quickly became apparent that with how busy he was, he wouldn’t be capable of running such a campaign for us. I would normally have offered to DM, but I am busy with my own first campaign setting and don’t feel confident enough in my abilities as a DM to run two campaigns at once.

I don’t believe we require any level of experience as a DM, but if you do find such a concept interesting, feel free to contact me via direct message. Currently we have only a meager party expressing interest, but if you would like more people to be in your campaign, I would be happy to help search for more.

I don’t want to be the kid who shouts “hamburger!” when everyone is ready to go for icecream, but how about some Shadowrun? Also, it must be part of @Napster’s destiny or something to DM Shadowrun 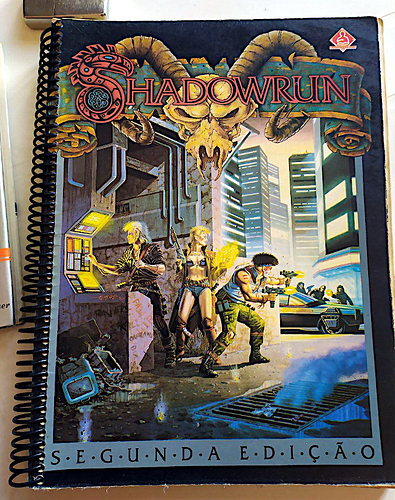 That would depend on which version of the RPG you wanted to play: Shadowrun is a science fantasy tabletop role-playing game set in a near-future fictional universe in which cybernetics, magic and fantasy creatures co-exist. It combines genres of cyberpunk, urban fantasy and crime, with occasional elements of conspiracy, horror and detective fiction. From its inception in 1989, Shadowrun has remained among the most popular role-playing games. It has spawned a vast franchise that includes a series of novels, a collectible card game, two miniature-based tabletop...

Paranoia is a dystopian science-fiction tabletop role-playing game originally designed and written by Greg Costikyan, Dan Gelber, and Eric Goldberg, and first published in 1984 by West End Games. Since 2004 the game has been published under license by Mongoose Publishing. The game won the Origins Award for Best Roleplaying Rules of 1984 and was inducted into the Origins Awards Hall of Fame in 2007. Paranoia is notable among tabletop games for being more competitive than co-operative, with p The...

I don’t mind doing other TTRPGs (I even switched the title). I just mentioned D&D because it’s the most recognizable where I live. If you or Naps would be interested in DM’ing (or if Naps wants to DM Paranoia, as his comment seems to imply), I really just wanna get a group together.

Sadly voice chat is an issue for me. During the waking hours my house is crazy noisy. Lots of little kids and my computer is in the dining room, which shares a space with the kitchen. So background noise would be high and disruptive to the game. My upcoming work schedule has me in bed at 4pm. I am awake during the hours of 12am to 10am CST with nobody else in the house awake. But those aren’t exactly prime RPG hours for other players.

Otherwise I would love to GM for a group. Although I haven’t used a standard RPG system in years. I grew tired of the restrictions placed on my imagination by rules and allowed player moves/actions/capabilities. The last system I was playing was Dungeon World.

I really enjoyed DW because it was so easy to introduce new players to. The entire character sheet was one 2-sided piece of paper. Which also contained all the moves and information a player would need to know before starting the game. The GM needed to read the rulebook, but the player didn’t. Additional “need to know” stuff was revealed in an organic matter, as the game progressed. It was the perfect intro and pick-up game system.

One core mechanic for resolution was rolling 2D6.

I modified this further so that 2 and 12 were critical success/failure. No matter what happens, the story was always encouraged to flow. Cinematic style playing was encouraged (my personal preference for any system) and character concepts were diverse, cool, and easy to tweak to player preference.

As time went on I got rid of DW altogether and kept the dice rolling mechanic. I kept in the loop on the TTRPG scene for many years, remembering the mechanics I liked, marveling at settings I liked, and following the industry. I’ve even considered working professionally as a TTRPG designer. I actually studied with Ennie Award winning author Johnn Four for a time. Though the money side of it being a designer was a problem and I ultimately up on that path. The point is, I’m very passionate about TTRPGs.

As a GM I eventually fell out of love with settings entirely. The time required to learn the canon of a setting just to GM a game was very high. Frankly the same can be said for rules with the vast majority of TTRPG rulesets as well. I have some skill in writing and I enjoy using my imagination and creativity. I think well on my feet so creating my own stories on the fly, improvisationally during play, became my preferred method of gaming.

Collaborative storytelling is the sweet spot of TTRPGs for me. I’ve focused on finding ways to get input from players and to find other mechanics (like the DW resolution mechanic) that I can drop into games on a situational basis, as themes and challenges warrant their existence.

I prefer to play completely within the theater of the mind. With the only props being whatever GM Tools or Player Aides I decide to devise for the story. Players tend to have a pencil and paper for tracking information or their evolving inventory. This is my preferred ways of GM’ing these days. I could say more, if it becomes relevant, but for now I’ve probably already talked too much

However, I would be willing to learn a new system for a new group. The obvious issue is my weird time schedule. Gameplay would literally need to take place between the hours of 12:30am and 10am (CST | UTC/GMT -6 | Texas, USA). If that is possible, I’m volunteering. If it isn’t, it won’t be a surprise

If i can’t manage my irl world i can’t possibly be expected to create one.

creating one is surprisingly much easier than managing irl

Yeah but its a question of winter is coming and i have to do something before homelessness.

Yeah but its a question of winter is coming and i have to do something before homelessness. 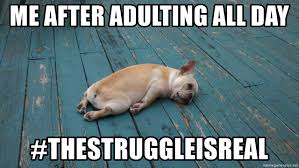 I don’t care to play due to having too many other things to do and being utterly burned out on TTRPGs.

However, if y’all start a D&D 5e game, I’ll personally give a mint condition copy of Strongholds & Followers to whoever agrees to DM and doesn’t flake out. Just to encourage this enterprise, because I’m a bro like that.

Worse than the hamburger kid is the one that stirs things up then leaves, but I’ll have to bail out—for the same reason @Napster is unwilling to fulfill his destiny. Sorry about that.

Aww, that is sad. At least if I ended up GM’ing. Was hoping to hang out in a fun setting

My destiny is manifesting

I was really hoping there would be more interest in this than has been expressed thus far. I’m sad to think that this might not get off the ground for you @mekriff. In an attempt to be helpful, I’d like to remind you that there are other ways to experience a TTRPG, like a forum based play-by-post and a new website I learned about called Storium.com (turns writing into an online multiplayer game).

These methods lack the live environment goodness of direct voice chat, but can elevate the quality of a game because players have longer to compose their responses. I would be interested in playing in either method, should you choose to go that way. In the case of a forum based play-by-post, there are online websites that can handle the rolls of the players but prevent players from fudging their rolls.