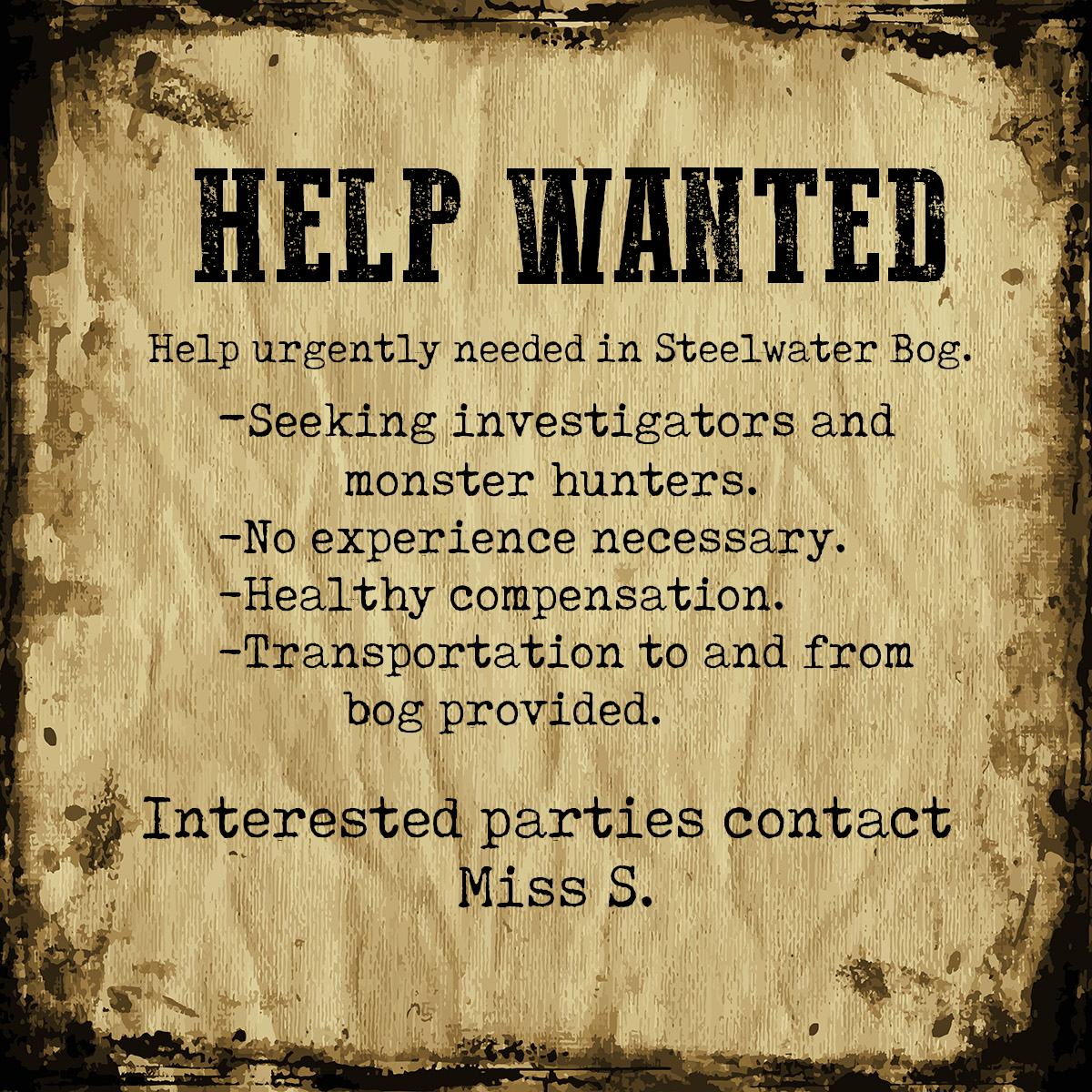 Due to a small issue in Steelwater Bog, Miss S. is recruiting a team of monster hunters to help protect the innocent populations of nearby villages and towns.

Monster hunting experience is not required, but please bring a team mindset as it will take a solid team effort to eliminate this threat.

This is a high risk mission and team members will be compensated accordingly.

This thread is for Werewolf Game 5.1 player recruitment and rule discussion.

We will be using fairly standard werewolf game mechanics with perhaps a few surprises along the way. I have a decent idea of where I want to take this, but I’m also open to suggestions. A full list of rules and roles will be added prior to game start.

The game has started and can be found at: Werewolf Game 5.1: Trouble in Steelwater Bog

For a list of rules please consult the game thread.

I signed up, but I’m gonna tag the rest of the people who would’ve been in the other game.

Vaga, I don’t think this one is about history or at least it doesn’t specifically say that so I think you’ll be fine.

All you have to do is say bye to all of the people that want to go at the beginning of the game and then you leave the story. Is that really that complicated?

But those peoples’ lives must continue onward, as they wonder what has become of the intrepid crew Miss S. has collected, with no way of knowing the life and death struggle the crew is to encounter, whereas a spectator to the game knows all of this and doesn’t have to be that concerned.

But those peoples’ lives must continue onward

but they aren’t in the story anymore at that point. They then go off to live their lives awaiting the return of the steelwater bog adventurers. They obv have to welcome everyone back at the end too.

That is the difference between building a story, and building a world.

I really only meant for it to provide a way for people to remove themselves from the list if they change their minds after signing up. I like townspeople idea though!

Samraku should be a townsperson if they aren’t playing.

I was joking about it not being a clear “No thanks” option. I know the idea of a pure Roleplay game here on the OGS forums has been floated before, particularly after Madness of the Martian Mimics, but I think it should have more thought than tacked onto a related but distinct project.

I think if someone is willing to put in the work to roleplay well, we could really use them in the game, and if someone just isn’t interested, it’s not going to be much benefit to have them ostensibly in anyway.

What about @yebellz, @Gia, @Leira, @S_Alexander, @Assai, @fiddlehead?
Or @mark5000, who watched some of the previous games with some interest?
And maybe @Sanonius, @Goule, @Lys are also interested.

I’m available after September 1st, if it doesn’t work I’ll sit this one out.

Thank you for thinking of me, but no thanks.

I’m tempted, but time has been hard to come by lately. Thanks for asking.

Can’t do. I’ve had to cancel private lessons I’m so busy.

I’m expecting every person that is busy to join a different one of these games in the future when they are less busy.

However, if I’m less talkative than normal, please don’t think I’m a werewolf or swamp monster or whatever.

However, if I’m less talkative than normal, please don’t think I’m a werewolf or swamp monster or whatever

No. I will just think you are a monster in general. Also I am gonna try posting less as promised

Also I won’t call us astronauts or something.

Well, if you’re going to bother me, I propose that we vote out Haze on day 1