Twelve people answered Miss S’s help wanted ad and arranged passage to Steelwater Bog. Upon arrival at the Oguesville west docks, they find a gruff man awaiting them on an older airboat.

I see one of you decided not to show up after all. When I have trips to the bog there’s always at least one fella who chickens out. Ah well, all those ghost stories are a load of hogwash if you ask me, but no one ever does so do with that what you want.

Anyway, I’m Burt. I’m the one who’ll be takin’ you-uns out to Steelwater Bog. I have copies of your contracts that you can read on the way out. Get on the boat and I’ll hand them out. Mind the fan blades, I ain’t liable for any fingers that ol’ Tina decides she wants to take off.

Thirty minutes later the boat pulls up near to the shore on the far side of Steelwater Bog.

Here we are. Miss Sapphire and her brother live in that cabin there. Shouldn’t be too hard to find, they’re the only people who live out here. I still can’t figure who in their right mind would want to live out here but they do…

We welcome all forum users to spectate and enjoy this game. However, in order to prevent the game from being influenced by spectators, please do not like posts from the players, vote in polls, or comment in the game thread until the game has ended.

There will be a separate (private) thread for kibitzing. Eliminated players will be added by me upon elimination. Spectators are more than welcome to join the kibitz thread, just let me know you’d like to join and I’ll add you.

People who value peace and quiet, my dear Burt.

A woman emerges from the building and walks toward the group as they get off of the boat. She is dressed in all blue and is wearing a necklace featuring a large uncut sapphire.

You kind people can call me Sapphire. I’m glad you all could make it out here so quickly. I wasn’t sure what I should do. Come and see for yourselves.

She leads them into the cabin. Inside, a man sits in a chair completely motionless. His skin is slightly gray, and his eyes stare blankly ahead.

This is my brother, Ruby. His soul has been taken by a soulsnatcher. We had a problem with soulsnatchers here in the bog a few years back, that’s where all of those rumors come from. I thought we took care of all of the soulsnatchers back then, but it looks like there might be another one around. I hope you guys can help find it and get rid of it quickly. If possible bring the soulsnatcher’s talisman back with you. Hopefully we can revive my brother.

During the night, three players who are out scouting find a set of crystals with strange runes etched into them. Curious, they take the talismans from the box and are filled with a desire to use the talisman to take souls.

The next morning Sapphire finds the box and recognizes the strange runes carved into the wood as relating to the soulsnatchers. She opens the box and sees the three empty talisman slots. She then turns to the group with a grim expression.

Who should be executed today?

Btw, not killing anyone is a bad choice in this game

All roles have been decided via random draw and players have been notified via private message.

We have 3 Snatchers, 1 Oracle, 1 Protector, and 1 Witch. In addition, the two Lovers have also been chosen by random draw. If you did not get a PM from me, you are a normal innocent hunter.

Good Luck everyone, and have fun!

As always, I think we shouldn’t kill anybody today. There are still 12 people and if we just suspect someone is suspicious then they could be a vital position.

Btw, not killing anyone is a bad choice in this game

Sorry, I’m not very experienced, can you tell me why?

not killing anyone is a bad choice in this game

Okay, I’ll just vote for nobody until we find someone to vote for.

A brutish looking man, experienced bounty hunter and former sheriff steps forward. He spits his chewing tobacco in the nearest puddle and clears his throat.

Butch plants his left foot on top of a tree stump and sticks another piece of tobacco in his mouth.

Ah reckon all y’all don’t start killin’ people with no reasin, alright? Ah’ll be over yonder if y’all need me.

Butch stomps off into the distance and starts working a piece of wood with his field knife.

Marlon leans confidently over a counter, staring at Miss’s voluminous hair. No matter if he lives or dies, he’d rather have some colorful fun in this god-help-me backland before shit goes down.

I think it is still wise that we bide our time. We have an oracle that can potentially gain us information, and potentially reducing our numbers may only speed our demise.

We need to keep our wits about us, and take careful note about what each of us say and do. Also, please mind the alligators, we don’t need them to thin us out even further.

Prof. Bellz, from the Dept. of Cryptozoology at the local backwater campus of State University, found a seat to ponder the predicament that he now found himself in. However, while trying to formulate a plan for action, he was quickly distracted with pedantic thoughts.

Well, since the only way to get rid of bodies is to feed them to the gators, it offers us no useful information to kill someone just 'cause they looked at us funny. It’s not like bodies will sparkle when they kick it and tell us if we’re in the right direction.
Better keep our gunpowder dry for when we’ll really need it.

Do you come here often?

I found something in Ruby’s things. I don’t know if it’ll help us but it might be useful to know what you’re up against.

Any one of a group of soul capturing crystals or the avatars under their control.

I think it is still wise that we bide our time. We have an oracle that can potentially gain us information, and potentially reducing our numbers may only speed our demise.

I agree with yebellz here, I think we should at least wait one more night and see what the oracle finds out.

see what the oracle finds out

After all those generations of oracles, I wish they had a trade tradition by now to leave a note behind, in case they bite it.
It’s like in the movies, where the chick is dying and utters “the killer, the one who murdered me, that traitor who took advantage of my trust, the killer is one of us, the killer is–” dies.

Plaid shirt, worn out jeans and almost a cowboy hat, James was a sight to behold. His complexion clearly wasn’t made for the hard work of his family’s potato farm, and you’d get had a strong suspicion that this boy was underage. There were no weapons on his person.

Stuffed on his shirt pocket was the crumpled contract from Steelwater Co. and a very old iPod. Everyone within two meters distance could clearly hear the music thundering out from his taped out earbuds

He climbed down of the boat, his head dangerously close to the fan blades; minding no one, he went up to sit on the log bench in the corner until the song was finished.

After a long and infuriating pause, he plugged his earbuds off and ceremoniously stored them in the same pocket.

—So, soulsnatchers and crystals, got it!—he said in a plain voice.

—You know, before coming here, I went to the public library and found a book from “Bellz et al.” that talks about it at great length. It is very interesting! There are stories about ghosts, and werewolves…—he rolled up his sleeve to reveal a werewolf tattoo on his forearm—I love this kind of stuff.

Someone else was about to say something, but James kept talking.

—He says that it is never a good idea to act rashly on the first day. I mean, even though they are magical monsters, they are more mundane than we think. People die because they fall for their lies, but if we pay attention we might reveal their deceit.

He kept talking a bit more.

—So, paying attention to what they say, and who they try to turn against whom. I mean, I agree, the only problem is that with soulsnatchers we won’t know who they are even if we killed them, and I haven’t yet figured that out. If we had an oracle, it would be great, but we have to defend them with our nails and teeth… wait… wha…?.. we do!? That is awesome!

So, we’ll be seeing more of you in the future?.. winks.

I shall end this day voting someone. I may not know who yet, but I think that this will give us a bonus chance, and so I will try to follow that path. I came here to go monster hunting, now I am still here to try to live. If I can’t live until the end, I trust that others will be able to finish what we started doing on this day, and then finish monster hunting for me and clear out all of the monsters.

For now, I shall just use my magic to change into a bird and go for a flight to calm my mind. 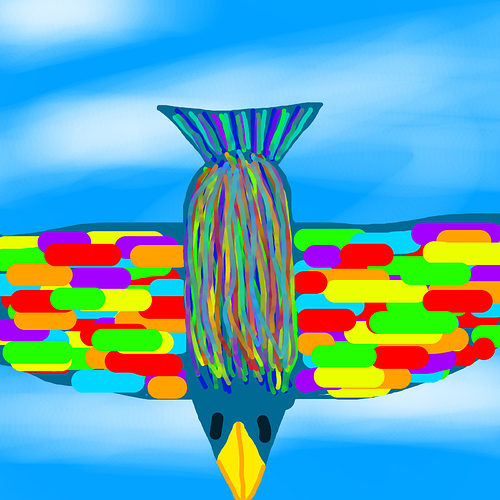