Is this comic sexist? 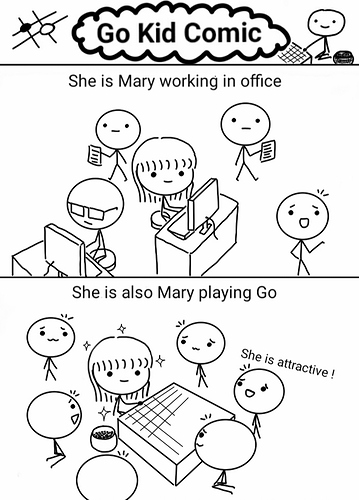 I received comments which critize the comic being sexist and make them uncomfortable. I have no such intention and only want to express my observation of boy’s feeling.

I believe you when you say that you didn’t have sexist intentions with it. But I also think that it can easily be percieved to hint at sexism.

It could also be taken as exposing that playing in a go club is uncomfortable for women. And I don’t think this is true in most cases, so I feel it’s unfair towards male go players.

So I feel that this cartoon is at least very ambiguous and many people will read more into it than you intended, which is what happened.

my observation of boy’s feeling

I believe you that you didn’t have bad intentions.

It would be a good idea to ponder on the quote above, though; are boys like that? If so, why? Do they feel they have to be?
How does this make everyone feel (Mary and the boys, POV)?
Is there room for more plurality in these feelings?

There’s so much potential for artistic expression in there, I’d love to see your take on it.

Another thing to ponder would be - why is Mary the ONLY female at the Go club? Why does she stand out?

Simply speaking, I believe the comic shows as an advantage what many women would find a problem.

I don’t think the comic is sexist.
I think it depicts something real.

A Go club is a place where women are (usually) a minority and men behaviour in that case is (usually) to flatter women.
I don’t have any doubts that Mary will get more attentions at the Go club than at work.
Is that sexism? We could talk about it for years (and actually we do: it’s an argument being discussed since longtime).

But the purpose of this kind of comic is to provoke a laugh and/or a thought about something real, and I think it does its job.

It is sexist and creepy!

I have three daughters and the two that are still at home find the cartoon disturbing.

They have started watching the first season of DS9 and whilst they accept that it is 25 years ago that it was produced, they find the young Bashir’s behaviour to women very offensive.

EDIT: I should elaborate… it’s when Bashir is trying to pursue a woman for romance that my daughters find offensive

Nowadays every thing is labelled as either politically correct or politically incorrect. Often two conflicting groups accuse each other of being politically incorrect. It is black or it is white and the colours in between are forgotten.
A better world does not start with polarisation but with communication, listening to each other, and changing slowly. That better world will always remain somewhere over the horizon, but as long as we are moving in the right direction, that is not a problem.
Well, just my two cents of wisdom.

Political correctness (adjectivally: politically correct; commonly abbreviated PC) is a term used to describe language, policies, or measures that are intended to avoid offense or disadvantage to members of particular groups in society. In public discourse and the media, the term is generally used as a pejorative with an implication that these policies are excessive or unwarranted. Since the late 1980s, the term has been used to describe a preference for inclu Early usage of the term political...

Does the joke still work if you swap all the genders? Personally, I think it’s a harmless comic, but I don’t find it particularly funny, sorry. I like the art style, though.

What I really appreciate is that @Gokid.hk comes out into the open with a controversial issue. That takes a lot of courage.

This is a good suggestion!

swap all the genders

That takes a lot of courage.

The impression I got from the comic, is that Mary is popular at the go club for being attractive.

Is this the intended message?

A better world does not start with polarisation but with communication, listening to each other, and changing slowly.

And that is what’s happening here. The thread-starter asked a question, because he is open to view his work from different angles, and open to communicate, and he gets honest and friendly answers here, so I can’t see anything wrong about that.

If you switch, it’s good working besides not very realistic because usually there are much more male as female in go clubs.

Sexism I dunno, to get attraction doesn’t mean she’s not interested in go afterall.

It’s quite realistic at least.

I think every judgment should take into account the intentions. Your intentions here look very clear to me (I might be wrong, but I interpret it as a hyperbole that shows your passion for the game and how you think a girl who shares your passion is more attractive). The fact that she’s a girl doesn’t mean anything, the opposite works as well. The fact that a male’s point of view is conveyed can’t in my opinion be regarded as sexist.

To make it more realistic you can swap the Go club for a … for whatever mostly girls like to do. Pottery class? Yoga group?

whatever mostly girls like to do. Pottery class? Yoga group?

That’s sexist. So, so sexist.

And if anything, it’s the boys in the Go club who are put in a bad light - as if Mary’s the only girl they ever see. Now, if you swap roles and put a normal looking dude into a yoga class, it still works just as well (or bad), then you have a guy getting attention from girls.

I’m starting to think that the drawing style has als an influence, depending on whom you draw ugly and whom pretty. With stick figures, it’s harmless.

If you think long enough EVERYTHING is sexist/racist/whatever.

Heck, yesterday I heard that people complained that cloth mandates for polar expeditions is “sexist” … having in the regulations something like “don’t wear crop tops and tight shorts” in an expedition that is heading in an icy, frigid, polar region sounds pretty reasonable to me.

As far as I can tell, some things are indeed sexist/racist, but nowadays it is mostly in the mindset of the people involved. Whether they are wired to find something to be offended or not.
Someone told me that I should remove my glasses when I play the goalkeeper or when I play basketball.
I do not have the “I want to be offended” mindset, so I always reply " I’d like to do that as well, but unfortunatelly I cannot see a thing otherwise. So, I’ll just risk it" and usually my glasses end up flying during the game.
If I did have the “I want to be offended” mindset I could have shouted and claimed that “they were discriminating against bespectacled people and trying to exclude us from sporting activities which we are equally capable of performing at”. /facepalm and where-is-the-bang-your-head-on-the-wall emoji?

Ergo, “if you think long enough EVERYTHING is sexist/racist/whatever”

So, the real question is, do you really care if what you make is mislabeled/misrepresented by some people?
If you do, then rest assured that there will always be some controversy/distress eventually, since it is a fact of life that you cannot make everyone happy.
If you don’t, then at least when the controversy does appear you can shrug, if it is something harmless, and say “well, I was expecting that” and get on with your day.

To make it more realistic you can swap the Go club for a … for whatever mostly girls like to do. Pottery class? Yoga group?

I remember a relative of mine telling me that in her university there were 150 females and 3 males.
Is that sexist? I do not know.
I do know that it was a fact.

So, suppose we swap this comic to reflect these guys and that fact. Is there really a problem there ? Personally I fail to see it. One could argue that hiding and obscuring the fact and making a tone-deaf comic would be more sexist because it would not reflect reality.

and we are back to the “If you think long enough EVERYTHING is sexist/racist/whatever.”