I’m a HUGE fan of the 9x9 format because players of significantly different strengths may still contest on equal terms. One slip, one careless moment and the tide of battle is turned in this wonderfully unforgiving environment. So let us celebrate that volatility with an equally volatile tournament. Eight of OGS’ best, drawn from the site-wide ladder into a single-elimination. No second chances. Eight will dream of glory. One will go on to become a “Ladder Legend”.

of the show are obviously our competitors, so introducing:

Three of whom are strong dans, falling into the catagory of either ‘irresistible force’ or ‘immovable object’, all with experience at the top of the ladder. Then we have five kyus, ranging from ‘almost-dan’ to one ddk. Ready to seize any opportunity, uncowed by the odds, fearless and worthy contenders all. Again, some with experience at the top, perhaps showing a capacity for upset wins.

If you are ever going to follow an OGS tournament, then here’s one to watch. The tournament format, which uses the ladder for its preliminaries, is nice and compact. There will be just seven games in total which should be concluded by the end of the year. @mark5000 has graciously agreed to provide some commentary at the end of each round, which I hope will assist spectators of all levels to a greater appreciation of the game.

I wish all those involved as entrants or spectators, good fortune and good Go. Enjoy.

As long as it’s in a spirit of goodwill and friendly competition, lets take a look at who is represented:

Yes, it is my intention to run Ladder Legend for all three board sizes next year if things go well with this inaugural event.

Round 1 is concluded and the fighting was fierce.

The Gods of chance were kind to the favourites, keeping them apart in the random pairings. This turned Round 1 into a bold series of attempts at an upset win.

Stay tuned to this thread for insightful commentary on Round 1 from mark5000 or maybe treat it as a ‘study group’ exercise by looking at the games yourself before reading the next post.

Round 2 is underway and the stakes have been raised with:
Sadaharu vs Thousand Rain &
Vortex vs zigah

Here are my comments on the four games:

Game 1: Sofiam vs Sadaharu: The moves to 6 are a variation of the so-called Jet Opening (because the arrangement of stones resembles a jet). Move 6 is more commonly at c5, but the purpose is the same: live on both sides of Black without making too many concessions. Black, in turn, needn’t kill either group but should instead put the squeeze on them from the outside. This happened organically through Black’s invasion at move 15, which is surprisingly hard to capture. But White brought out a cloaked dagger with move 16, which made White’s block at 18 a clean capture. Black should have answered move 16 at c6, which is forcing and makes some future moves atari when they wouldn’t have been otherwise, then at d8 or f8 or h4. Blocking wasn’t good enough in this case. When faced with a threat, you should remember that mutual damage can be better than defense.

Game 2: Niverolle vs Vortex: Black’s counter-hane at move 5 forms the so-called Black Boomerang, which is massively popular on GoQuest and also with professionals. White’s push from behind at move 8, exposing both cuts, is actually the most popular continuation. Black’s deep invasion at move 11 is less popular but no less strong. Indeed, Black put up a stiff resistance for a very long time. The most shocking move was the smothered attachment at move 16, which aimed to get more out of the position (in this case, b3 in sente and later h4). Black wasn’t losing after this, however, and I might actually have chosen Black. But White’s hane at move 28 was really severe. It seems Black didn’t expect the ko that came after Black’s move 25. Had Black cut first, the first-line bend might have gone better.

Game 3: S_Alexander vs Thousand Rain: Black opened this one with a leaning attack at moves 5 to 9. I like Black’s position out of the gate, but just a few moves later at move 16 the position is very nearly “GG.” What happened? The strategic error was allowing White to kill the cutting stone at g4, thereby seizing the entire right side area, and with it the game. Tactically, Black should have tried move 15 as a clamp at f7, looking to connect in sente in order to contest the connection at g3.

Game 4: zigah vs pOngyBoy: OGS regular @bugcat has dubbed this the “Scared of the Snow” opening. Despite looking like a retreat, move 3 is actually severe—it’s the only local play that simultaneously discourages invasion of the right-side area. White continued with a three-corners strategy but got split into three groups. As a rule, three groups is too many, so move 6 should be one point closer at f7. It was good for White to connect the two upper groups, but at some point you have to realize that the upper side area is insufficient space and attempt life on the lower side. e2 would have been a good try, and move 18 was the last chance clear chance for that idea.

Amazing - to see some regular 9x9 players as well as some dans too who are to say the least, quite exciting players. Thanks for the commentary (helpful/essential for learners like myself).

@mark5000 this makes me miss the Crazy Nines series! We should do more once I come back with better production quality

Stay tuned to this thread for insightful commentary on Round 2 from mark5000 or treat it as a ‘study group’ exercise by looking at the games yourself before reading the next post.

Round 3 (The Final Match) is now underway. It’s do-or-die:

Here are my comments on these excellent games:

Game 1: Sadaharu vs Thousand Rain: Moves 1-4 are known as the slider opening, and Kim Jiseok 9p has also played it. White probably chose move 6 because of komi; White may have thought that d7/c7 wasn’t enough. Move 9 was solid, though more commonly played after atari at g6. But when White answered in kind at h5, Black gained a tempo (in chess terms) and could play somewhere other than g6 next. White 10 was probably the losing move because of this and the lack of chances to seize control of the game afterward (White could try h5 at g6), though it’s far easier to see with hindsight than during a game (everyone is 2 stones stronger in review). The fact that the game ended by timeout is of no consequence. The best continuations still lead to B+0.5. Although a more cynical person might blame White’s loss on komi (who says there’s no luck in Go?), to me, it’s more accurate to say that this game was Black’s masterpiece. Black never played a suboptimal move so far as I can tell, which is a really incredible feat even on the small 9x9 board. Congratulations to Sadaharu!

Game2: Vortex vs zigah: Move 3 has been called “soccer juggling” (football, to our non-American friends). Splitting with move 5 was a good idea, and the leaning attack in combination with move 9 would make Jim Davies (“Attack and Defense”) proud. Before that, White 6 was interesting and defies the proverb “hane after attachment” (hane was also possible). Move 16, too, was interesting in that White had a clear life after d2 but declined. It’s unfortunate White missed a tesuji at move 20 with h4, which would have forced Black to concede one of the right-side corners in miai. White eventually noticed h4 but only after the balance of the game had tipped in Black’s favor. The tipping point was a bad exchange at move 22 (all SDK players should know the tombstone tesuji at b1 and preserve that aji), followed by a slack move at 24. Although Black took the game, White should feel good about going toe to toe 20 moves with an 8 dan opponent and even making chances to win, and with such novel moves like 4, 6, and 16. I can’t wait to see where White goes in the future.

Thank you, sir, for this review. This really sky-rocketed my motivation for playing go.

all SDK players should know the tombstone tesuji at b1

Could please someone explain this?
I searched and found the “tombstone squeeze” on Sensei’s but can’t see that situation in the game.

I added some variations to show what I meant. You’re right; it’s not a squeeze. I could be misusing the term, but I thought tombstone “squeeze” means what Sensei’s library says, and tombstone “tesuji” is more generic and means a first-line descent that steals eye shape.

Thank you very much.

After your previous message I tried some variations and looked also into those you explained later, but didn’t think about the black tenuki (the move you placed at J9).
I was so focused on that corner to forget the black’s will to play elsewhere.

Forcing black to spend another move to fix the corner is a profit in itself, isn’t it?
So, in a real game, what would be your advice for white? To descend with B1 and then play elsewhere?

Yeah, White would descend to b1 either then or later, since it’s not quite big enough for Black to capture yet. I’d probably start with h5 and then see how Black answers. If that doesn’t lead to any winning variations, then the balance tipped at move 20.

@Kosh this is awesome! Thank you for organizing the event. Thank you @mark5000 for commentating. Thank you to all the players who participated. So exciting and what a great opportunity to learn. Thank you all

Breaking News…The Final Match is over! After the strain of the hard fought semis, both finalists were keen to take it slow and use a little vacation. 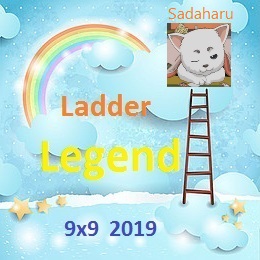 The opening is an unusual and difficult one. I invite all interested parties to make what you can of it before (and after) mark5000’s commentary arrives. Good luck.

See you all in 2020 for Ladder Legend on ALL three board sizes:

Final game: Vortex vs. Sadaharu: This 8-move game pits normalcy against creativity. Since the whole game is “in book,” so to speak, we can look at Waltheri’s database and find that Black followed only the widest path, taking no chances in a tournament final. White consistently took less popular moves, however. That’s the subtext for this game. Game-wise, the opening was New Orthodox, where the players face off in the center hoping to control the sides afterwards. Mirroring is more likely to occur here than in any other opening pattern, but White broke the mirror early with a one-point jump at White 4. Black 5 limits White’s expansion. White 6 was calm. Black 7 slices the pie too big for Black and guarantees invasion. White had many choices for invasion, among them the attachment at 8, which exploits the aji in Black’s double knights to get a piece of the corner. It’s too bad the game ended here. Computer analysis suggests that neither player made any inaccurate or questionable moves. But when humans play, Waltheri suggests this game is not easy for White, as Black won both games from this position, even with 7 komi (area scoring). See both games here. Then again, it’s only two games.

Congratulations to Sadaharu for winning the tournament! And thanks to @Kosh for organizing.