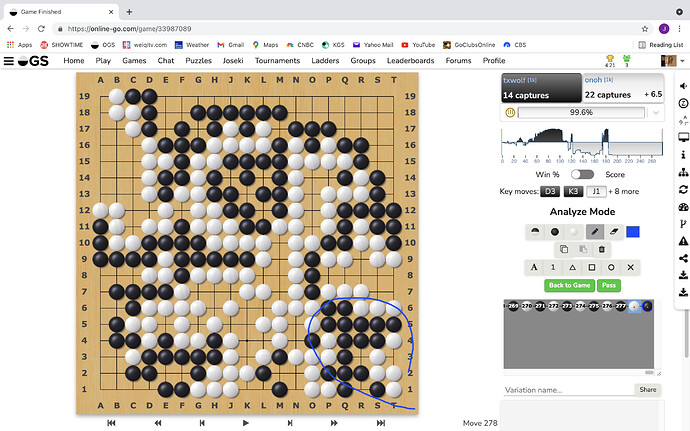 i think i was over thinking, more of wondering the repeat board position thing. not going to happen unless one makes mistake.

I couldn’t find a thread for this, but I wanted to show a large early-game seki from Kata vs Leela, which developed from a 3-3 keima-and push-in, inside cut joseki. [image] I tidied up the outside, so we can see that there are 20 black and 20 white stones relevant to the position.

I don’t know if there would be a strange case where for some reason superko kicked in.

Under superko it’s dead, though.

Eventually there won’t be elsewhere to play, then it’ll be clear that it’s dead.

Well that will be the choice of the loser, filling an eye of a two eyed group or destroying the seki, but he doesn’t have to take the second option

Filling eyes is not going to help either, eventually there just won’t be any move to make on the outside; it’s impossible to keep going for infinitely long outside of the seki, so eventually the only thing that can be played is the ko-seki, and one of the players will not be allowed to capture the ko due to superko.

Filling eye will not help but one of the losing option, it will be one of the legal move to play to keep fulfilling the superko rule. Of course noone wants to do it but there should be a winner… It’s the same for other kind of seki, you don’t have to destroy it just reach the point where one has to fill one of two eyes, because basically his territory is smaller as the other player one.

I think katago is scoring it as a seki, but I guess that’s with japanese rules.

It’s hard to see how one side dies. Suppose the dame have just been filled, and suppose it’s white to move.

White captures S1, then Black T5 (no going to be any repetition so far.) White can try to fill in a point in their own area in Chinese or other Area scoring rules and Black can pass, then if white takes back T4 Black takes back.

Hmmm, I think I miscalculate the superko, indeed. Indeed there is no way to win the ko, since under situational superko the ko can never be resolved, and under positional the first player to take will lose their group.

We start at position 1: 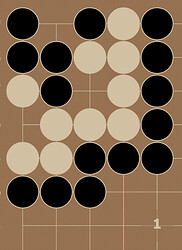 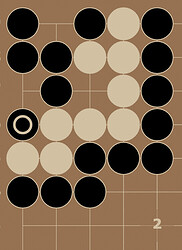 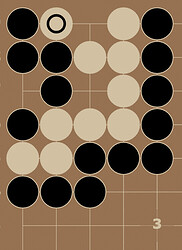 Black is forced to pass under any ruleset: 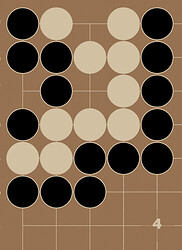 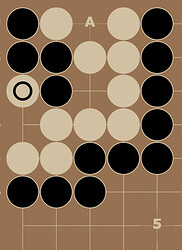 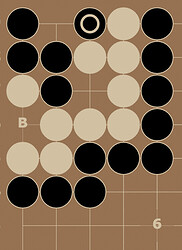 But now, White cannot take due to normal ko rules, and after White passes, Black cannot take B due to superko (repeating situation 2)

Cool. Is this true under any ruleset?

Unless there’s some other kind of ko rule, yes. Chinese rules use positional, AGA and NZ uses situational. Under Japanese and Korean there’s no superko, so this would count as “no result” (since the losing player could repeatedly play the ko, to drag the game on indefinitely)

Under Japanese and Korean there’s no superko, so this would count as “no result” (since the losing player could repeatedly play the ko, to drag the game on indefinitely)

No, that’s incorrect. It should also be considered a seki under Japanese rules.

This is one of those weird cases, where an obstinate player could waste time indefinitely (given a plain interpretation of the rules), but the Japanese rules commentary specifically mentions this situation to clarify that it should be a seki.

Under Japanese and Korean there’s no superko, so this would count as “no result” (since the losing player could repeatedly play the ko, to drag the game on indefinitely)

It’s just seki in japanese rules? Let’s say like in the game, Black is losing even with the white stones declared dead, so Black takes, white takes, Black can’t recapture because of the ko rule so has to either fill in own territory losing points, or pass which will end the game.

Eventually Black will kill all of their remaining groups on the board by filling in their own territory, or White can wait till they’re are enough ahead to let Black win the ko (which in this particular case is immediately :P)

I think it would be a good addition