About encouraging and discouraging new accounts.

What if we take accounts registered in a certain month. And see how many of them have deviation <=79.9 meaning they achieved more or less stable rank, and how many of them have deviation <=349.9 meaning they played at least one ranked game. And the proportion would show how many of those who tried to play ranked actually played enough games to get a rank. And if we plot it over many months, we get a historical record of how changes made to OGS affect this proportion.

It’s related to all those questions whether starting all players at some middle rank forcing beginners to get crushed discourages them and so on.

We only take players who played one ranked game (<=349.9) because players without games could be bots or whatever.

And the second number <=79.9 is chosen because deviation (once it goes down below that) is unlikely to go up again. But sometimes established players have their deviation go above 70 so <=69.9 wouldn’t work.

This doesn’t take into account any unranked games but what you’re gonna do. 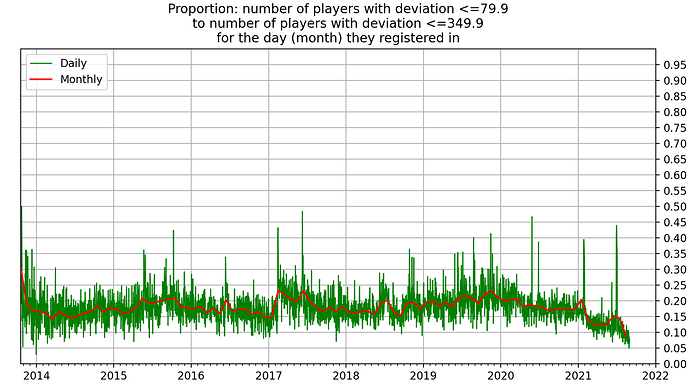 We should ignore the recent months of the graph because people simply didn’t have enough time to play enough games. It can take months for a player to finally play enough games to get a rank. It took a year for me.

On the left you can see the fragment of good old days but it’s also not too meaningful since it was old OGS/nova and it was completely different back there.

It looks pretty stable, doesn’t it?

Is that a kind of alphago “peak” in the middle there. And a gradual declined during the pandemic, maybe due to a larger number of players joining and so the proportion converting being pushed down?

Starting from a new account, how many ranked games does it take to get a stable ranking (deviation <=79.9)?

And a gradual declined during the pandemic, maybe due to a larger number of players joining and so the proportion converting being pushed down?

Given that it takes some time to get a stable rank, that might explain some the of apparent recent decline as just a factor of how much time it takes.

Does this take account of OGS ranks used to be super unstable due to volatility parameter wrong value bug, but since latest rating system update are much more stable?

every rating system change, anoek runs the new system retroactively against all game history so it’s as if (in theory) we’ve always only had the current system 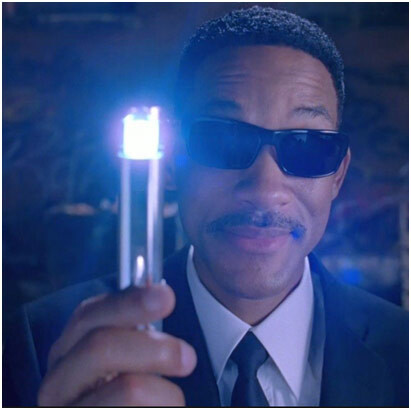 In my experience, people generally get a rank within 6-10 games. If they consistently defeat much stronger players, it can be even sooner. I’m not sure your investigation is reliable because it does not consider the effect of alt sandbaggers. Alt sandbagging is a major problem on OGS, as on all servers. If a sandbagger has high SDK or low dan strength, they can rank their account up to their level in 6-10 games (i.e., not merely get a rank), at which point they abandon the account and start all over again. I’m afraid this hugely distorts the statistics you are relying on.

people generally get a rank within 6-10 games

is it true at the extreme of the rating? (beginners and top amateur) These are the ones the most concerned by the weirdness of the system.

As noted in my previous post, strong players can get a rank very fast. As for the weirdness of the system (related to the starting pseudo-rank of 6k), that has already been extensively discussed in another thread.

The point of my previous post is that alt sandbaggers distort the numbers being discussed.

your experiment is a nice point, but you are like 11k, not 25k! not really at the extreme. there are 5 levels between you and the starting point, 19 levels for a beginner.

I am very cautious to not jump again in the debate between welcoming a beginner vs fighting sandbaggers, I myself think this topic is interesting in itself to better contribute later on that opposition.

in my opinion there is no need to try some global statistics flattered by these sandbagging mechanism, we could just report facts from real beginners, or make some theoretical calculation from the maths involved to see what should be expected.

[20:54]beri: Hi everyone, a newly arrived member can’t play against the weakest bots, despite being a complete beginner who never played a full game. The site displays a message saying sth around "you can’t play

[21:10]Vsotvep: Hi beri, yes, this is a bit of a problem that we are aware of. My best advice currently is to play some stronger opponents and lose a couple of games. Within 2 or 3 games you should be able to challenge the weakest bots

Once more. (Today help chat) Now go find which enough strong player you are allowed to play with to crush you {Oh maybe i missunderstood, i can play a 2d bot so dan should be for beginners ranks? } and please appreciate the slow decrease until you will have free white card to play someone beginner like you. If you ask me why, let me tell you that’s because we fight sandbaggers like this and maybe you are one of them, who knows? Let’s be honest before infliging the pain.
Already said somewhere? Well nothing new on the horizon too.

Slow decrease: after @Conrad_Melville honest experience to go through 7 games to get his 11k ranking, i can believe post before who talk about observation for 25-30 games to go to 25k. and even if it’s less like let say 15 it’s still far too much for a crushing welcome to a beginner.
How long OGS will be the champion of hazing between all go servers?
rant off.

This has probably already been discussed, but why do we even enforce a rank limitation for bots?

Because it’s ranked games so your rank has to be within a certain distance from the bot rank (if more as 9 levels difference, the game cannot be ranked). If you start at 6k which is now where your hidden provisional ranki.ng start, you cannot play a ranked game with a bot with a level less as 6+9=15k.

It’s worth noting that we only limit ranked games to align with the historical soft cap of handicap stones. There is no limitation within glicko ratings that would stop us from opening up ranked games between all users. It’s purely a design choice.

Indeed there is no calculation reasons to limit it but one could become concerned by the extreme gain of points if the result is not logical, or the very small if logical. Nvm it could accelerate the updating process for a beginner vs a much stronger bot or player and give access to weaker as the limited OGS created too.

Yes but honestly, concerning the attitude and welcoming of beginners it would be a very tiny progress quite insufficient in my opinion. Just a way to give access to more games, games still flawed by essence. Enlarging the scale of admissible games to be ranked could only help to postpone further a new friendly system for our beginners.

Because it’s ranked games so your rank has to be within a certain distance from the bot rank (if more as 9 levels difference, the game cannot be ranked).

If this is only due to the historical soft cap of handicap stones as mentioned by @BHydden, then we should probably get rid of such arbitrary limitation.