Reporting: A guide to making good use of the ‘Call moderator’ and ‘Report’ functions

Please don’t hesitate to make legitimate reports. Prompt reporting of issues allows us to quickly point new users in the right direction or remove known trouble makers before they bother other users.

Please don’t report the same issue more than once. Doing so may slow down our response or cause confusion when multiple moderators attempt to look into your report at the same time. Reports don’t disappear until a moderator has looked at them so please be patient with our volunteer team.

Edit Note: System is currently being overhauled. Option #2 is not currently available but using #3 from inside a game now covers that use-case.

There are two ways to report issues for moderation: 1) from inside a game, or 2) from a user’s name. If your report involves a game, then the best way to report is by using the “Call moderator” button from inside the game. Using this button automatically attaches a game link to your report that helps direct the moderator to exactly what you are reporting.

On a desktop computer, you can access this button from the sidebar on the right edge of the screen: 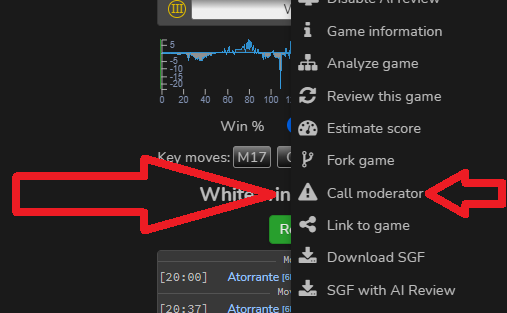 On a mobile device, you just need to scroll down to find it: 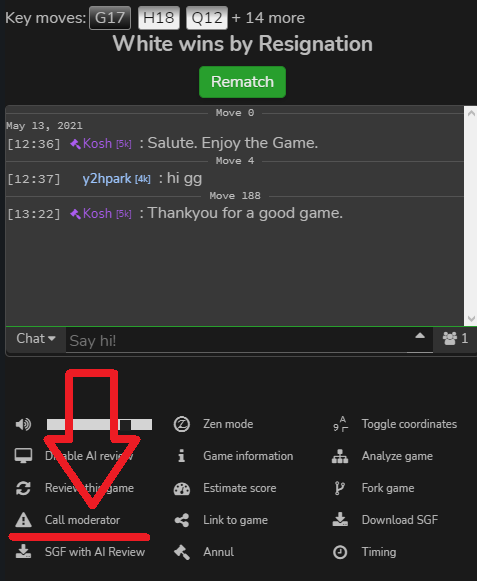 If you are reporting a user for reasons that don’t relate to a game (such as bad behavior in a chat channel or mass cancellation of games), then just use the “Report” button that appears on the pop-up menu when you click on another user’s name. This works anywhere on the site. 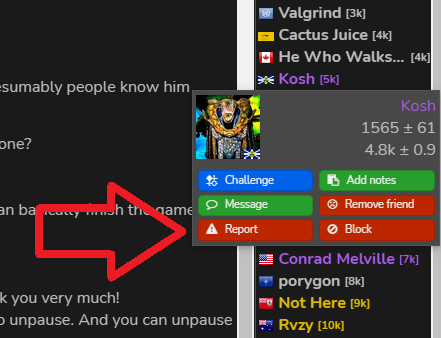 4. The Details (It’s all in the details)

The next step is to provide a few details…

Please provide enough information for us to efficiently follow up on your report. One-word reports like ‘Cheating!’ are less likely to be correctly assessed. On the other hand, detailed reports like “My opponent manipulated the outcome at scoring and won wrongfully” promote efficient resolution.

Anyone who regularly files reports is strongly urged to look at this thread as well:

Howdy all, Over the past few weeks we have received dozens of mod reports targeting a wide variety of players for conduct such as trolling, sandbagging, playing random moves, using AI to make moves, being an AI player, refusing to resign, refusing to score, wasting time, and cheating in general. Many of these players fall into the same pattern: a new account, playing the first games, bad moves, losing hundreds of points, won’t resign, playing well past move 300. Then they get reported and insul…

“That’s all folks.” Thankyou for taking the time to read this and I wish you all “Good Games.”

How brief is brief?
Maybe be nice to know how many characters you can use and how many you already did use, like (37/80).

How brief is brief?

Actually I would be happy to see the word “brief” removed if there are any github contributors listening. We have a lot, lot more instances of insufficient descriptions than excessive ones.

nice to know how many characters you can use

I don’t know the upper limit character-wise but it’s over 500 so that should do.

Please provide enough information for us to efficiently follow up on your report. One-word reports like ‘Cheating!’ are less likely to be correctly assessed. On the other hand, detailed reports like “My opponent manipulated the outcome at scoring and won wrongfully” promote efficient resolution.

Can I report that the report pop up box closes far too easily. If you misclick slightly somewhere on the screen the box closes and the detailed report you tried to write is completely gone and have to start again. After two or three attempts it’s very tempting to just summarise in one word out of frustration.

I’ll see what we can do about these.

As a moderator, I encounter this problem often when filling in a reason for an action on a form. Doing a paste of a game number too fast, in particular, causes the box to close. I suggest drafting your response first in a Word file and then copying it into the form.

Edit: Changed “Clicking” to “Doing” because I am using keys, not the mouse.

3 posts were split to a new topic: Improving the reporting form

Even if “brief” is removed from the text, the design of the box suggests brief comment. Since it’s a single line field with limited field of view of what you’re typing, it’s very natural to think you’re supposed to put in a short phrase tops. If it was multiline comment box, it would suggest you may put like a paragraph of text there.

I think it’s an interesting case of intuitive design where the appearance itself directs user actions.

Yes, I have it in mind to change that box to be a better fit-for-purpose. FWIW, this piece of code is quite ancient - it appears to be part of the earlier bits, and is implemented with an old style convenience function rather than and “thought out GUI to make it nice”. Very likely something along the lines of “oh, I guess we’ll have some reports, I better quickly put in this handy entry form for that” … on to the next thing.

The other thing is that, even if the box is bigger so that my particular issue is fixed (like I won’t accidentally let go of mouse click outside of the box region) there’s still the issue of the report box being in the way of the game.

One can imagine you want to write something, then maybe you want to go and check the game for some reason (maybe you want a move number that you don’t remember) you click outside the box and woosh everything you wrote so far is gone.

I don’t that’s a good design choice. At least if I click “close” I know it’s something I consciously chose, so it really is my fault that I got rid of it, and I’ll know for the next time,maybe opening the game in another tab etc.

I think once I clicked outside the box to scroll the chat (I wanted to report a rude player iirc) and the box disappeared.
And wanting to check my previous sentence in that one line space also.

I really hate modals for this reason. It drive me bonkers. I’m not yet sure how easy it will be to have something different (like the PM chat boxes). It may be that a first improvement will simply be not dismissing by accident.

O that’s too much honor as I’m no programmer at all!
Just figuring out how to improve it …

Btw I’m no heavy user of call for mod button but I’m prone to click far away often with my fat finger on my phone. I do remember the same problem happened to me.

Ah hah - well, yes, in theory one would simply say “don’t do that cancel when they click outside” thing, but at first glance this seems to be “built in” to the old component that is being used for this… though there may be a switch somewhere I didn’t find yet.

7 posts were merged into an existing topic: Improving the reporting form

6 posts were merged into an existing topic: Improving the reporting form

Oh oh someone’s been called to the Principal’s office

Game never moves to my move, somehow I am the one timed out Support

I hope this is not due to @GreenAsJade fixing the call moderator closing on click outside thing!