There’s a reason we play Go on a square grid, instead of on a triangular or hexagonal grid.

If most vertices have only three liberties, it is hard to escape from being captured, meaning many moves are forced to avoid capture: moving out of atari will grant you only one extra liberty, thus basically any atari is a ladder.

On the other hand, if most vertices have 5 or more liberties, it is too easy to escape, and too hard to capture. This makes it hard to create a threat or to force your opponent’s hand.

Now, there are several uniform tilings of the plane that have the property that every vertex has 4 liberties. First, there’s the square tiling (so the grid we’re already using for Go), second, there is the trihexagonal tiling, but the one I’m interested in is the rhombitrihexagonal tiling, mainly because it just looks awesome.

Does anyone want to play a game on this board? 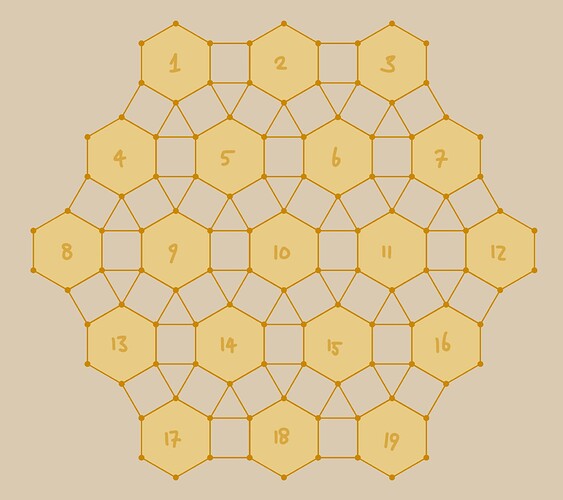 I thought it would be easiest to communicate moves by mentioning the hexagon it belongs to, and then mention the clock position for the vertex. For example, Black has a stone at 5 - 4 o’clock and White has a stone at 15 - 10 o’clock in the following position: 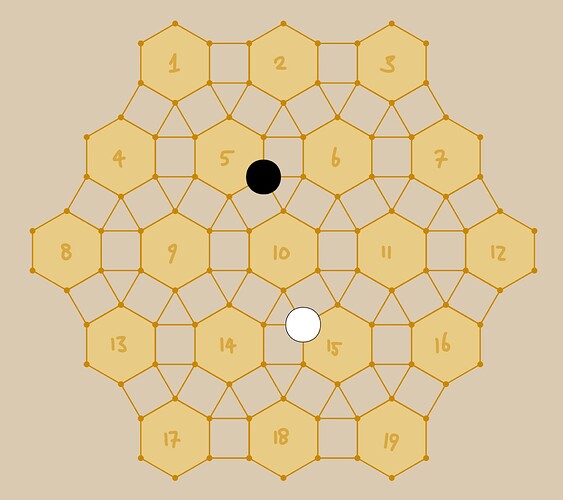 With 19x6 being 114 intersections, this very cool board is only slightly bigger than a standard 9x9 board, or even slightlyer smaller than an 11x11 board

I’m happy to scale it up and add another few hexagons, but I thought that’d probably deter people from actually playing.

The next would be 28 hexagons, giving 168, which is almost perfectly matching with 13x13. Larger sizes yet, would be 45 or 66, getting us 270 or 396 intersections. There are intermediate stages possible as well, with other shapes forming the edges.

I’d be happy to play.

Adding an extra ring around the outside might be interesting, that way each edge piece has 3 liberties, instead of sometimes having only 2. 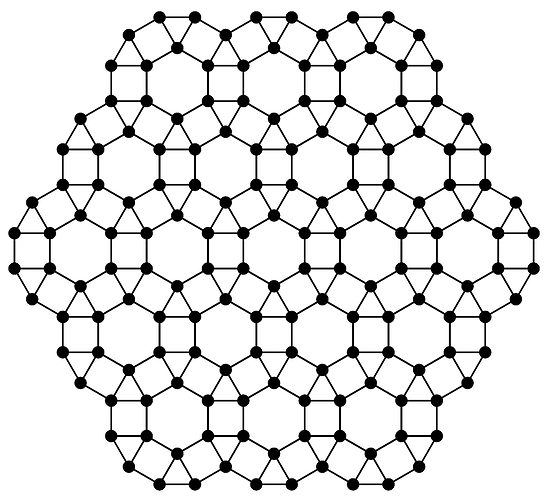 It would probably require drawing the hexagons on the outside just to reference the points.

@ArsenLapin1, what board size / shape would you prefer?

If upscaled, I might spend the weekend building some interface for this.

@ArsenLapin1, what board size / shape would you prefer?

Let’s do 7 with the extra ring, then, and perhaps play a larger game afterwards.

I’ll keep the outside hexagons on the board so we can name the intersections in the outside ring. Do you want to play Black? 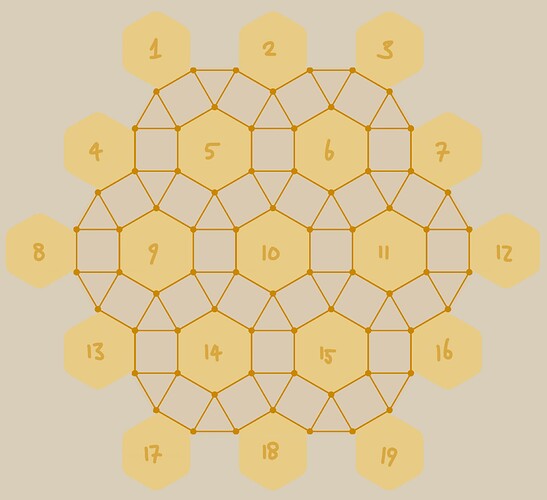 Do you want to play Black?

How much is komi? Are we playing with AGA rules?

I’d say a komi of 0 is probably appropriate without knowing how this game plays out, especially on a small board.

I suggest using area scoring, positional superko and no suicide. If that coincides with the AGA rules I’m happy to play with those, but I’m not really aware of the intricacies of AGA. It probably shouldn’t really matter in any case

I suggest using area scoring, positional superko and no suicide. If that coincides with the AGA rules

Yes it does. Also the AGA rules add the possibility to use territory-scoring-with-pass-stone, if both players agree, which is equivalent to area scoring.

French rules are almost exactly the same as AGA rules, but use situational superko instead of positional superko. (Although I doubt that this subtle difference has ever mattered in any tournament game, ever.) 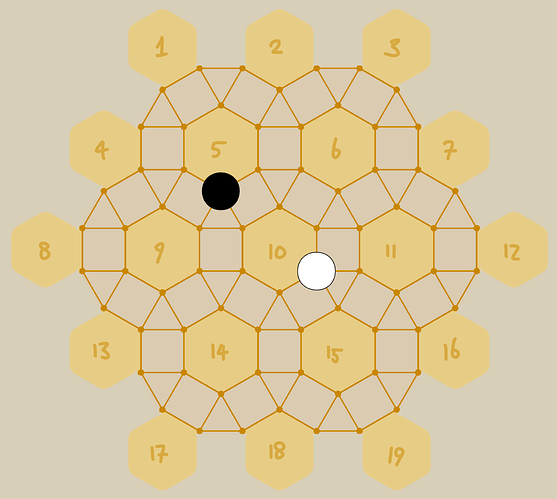 Are you playing the go stones manually with an image editor, or do you have a script that reads the coordinates and produces a new image?

Manually, for now. I might make something resembling my multicolour tool, but it’s some work that I’m sure I won’t do today. Perhaps in the weekend. 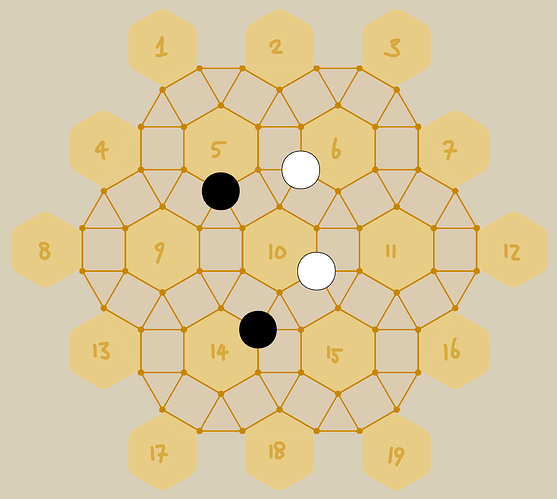 W3Schools offers free online tutorials, references and exercises in all the major languages of the web. Covering popular subjects like HTML, CSS, JavaScript, Python, SQL, Java, and many, many more.

be useful to tag an image and make parts of it clickable to say add stones over the image. Just since you already have the image.

Edit: as in not to make it redirect anywhere, but just have an onclick function that changed visibility of stones or something.

How to convert a portion of image to clickable button?

Something like that could work, but I’d like to generate the board itself. The location of the stones are pretty regular, and although with perfect squares and triangles the coordinates are irrational, you can make a close enough approximation that would just be a repeatable pattern.

I’m generally hoping to create some kind of tool for making gobans of weird grids at some point, like a generalisation of the Escherian board I made. Probably something to do with adjacency matrices 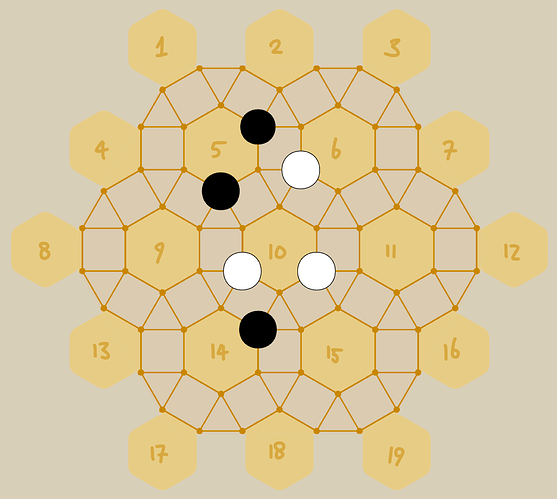 Look at this guy, eventually inventing the Go-variants for multidimensional manyfolds in case Cthulhu shows up at the club room.

So cool to see and a Bereicherung for the community.