Should we give a nickname to OGS?

Granted that we are not barbarians or other kinds of delinquents and we pronounce OGS in a civilized manner as “oh-ji-es”, maybe it’s time to find a nickname for the server?
Something cute, or catchy, or maybe some WWE macho stuff?

Imagine the dialogue:
-Where do you play Go online?
-On Oji*. You know, like aji, but online.

(If such thing exists and I’m excluded, I’m deeply hurt).

I’ve read that some people already call it “ohges” (pronounced like rouges without the r).

That sounds colloquial and nickname-ish to me…

You mean they pronounce it uuz?! With a thick z?!

Where did that come from?!

Unless it’s one of those weird English accent/ pronunciation things that turn French words unrecognizable.

@Eugene meant to say that it rhymes with “rogues”. At least, that’s how I pronounce it…

Rouge (“rooozh”) is french red, which is totally different to a rogue (r-oh-gh)which is a naughty person

I say we need a better option.

I’ve never head anyone IRL pronounce it in any way other than “oh-gee-ess”.

I know that I am not the first one to suggest this, but “ogs” as in “frogs” is another possibility.
At least that is what my younger brother called it during the short time he was into the game.

People, there’s one unwritten rule for all nicknames, and that is that it should be easy to call out.

We need something that rolls on the tongue.

Just to throw out some ideas.

I think in a lot of cases (although not all) nicknames tend to be shorter than the original name. Imagining old school ones like Robert -> Bob, or Daniel -> Dan etc. It’s hard to shorten OGS to just O or GS or something

Although in some cases nicknames are a similar number of letters but maybe less formal like Charles->Charlie. Could call OGS->Gus.

Then in other cases nicknames have nothing whatsoever to do with the original name but of some property or trait of the individual or just some story about them (or website in this case). So we should just all call it Nova to confuse people.

Then another option that Gia gave

Something cute, or catchy, or maybe some WWE macho stuff?

This is why ohgs (as in rogues) seems right because it is one syllable instead of three.

This is why ohgs (as in rogues) seems right because it is one syllable instead of three.

While officially and formally I am still in the oh-gee-ess camp, I must confess in my head I sometimes say it ohgs due to this simplicity (and also a little “in-croud”-yness if I’m being honest)

Automatic nickname generator tool. Choose some keywords and we will automatically create a nickname in seconds.

No results found for OGS (or my name, btw).

If you fill more fields you will get results, although most of them are rather stupid.

If you do it like following example, there are plenty results.
And one of those results may be the inspiration for a OGS nickname.
But don’t expect wonders from this site. The creative part we will have to do ourselves 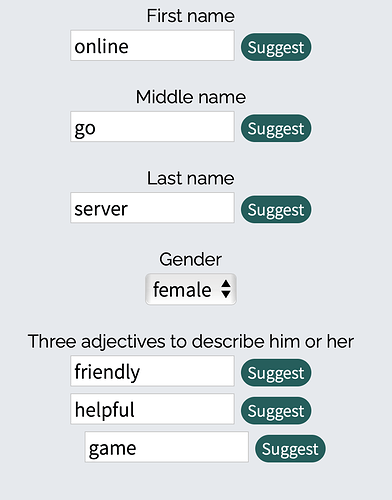 it probably makes sense to try both

I guess that depends on the language…
In Portuguese I think it would be male.