Today somebody on FB asked about the well-known poster which Yellow Mountain Imports used to sell … I couldn’t find it on their Web site anymore, so I searched Sensei’s Library, found a quite similar diagram there, thought it might be nice to have this as a graphic for free sharing, and thus I created one. 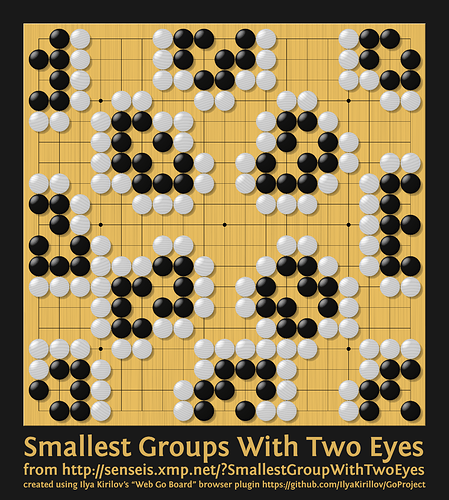 Not quite press quality but I think it’s big enough for printing in good quality on inkjet and laser printer (the actual image is bigger than the preview). Share wide and fare if you think it’s helpful 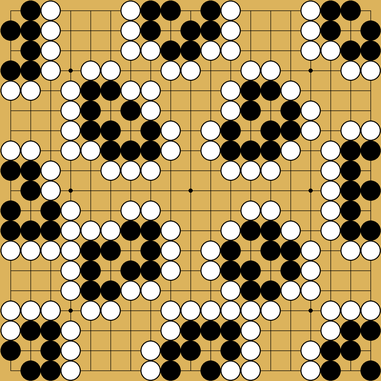 I was thinking on making a sort of flashcards set with problems on one side and answers on the other. Will defo add this as a quick reminder!

Just also as a reminder: these are just the Minimal Life Shapes, NOT to be taken as a suggestion for the architecture of one’s games

Though that could be an interesting variant. Whoever makes the most groups of minimal size wins.

You’d have to add in some extra rules so that most games between similarly skilled players had at least a few scoring groups. Probably a rule against moves that are worth negative points in Japanese scoring at the very least. And maybe a rule that says that no player is required to fill in dame before counting if it would connect a scoring group to another group, thereby losing a score-point.

And probably some extra rules that would become clear as players found loopholes to exploit. But could be a fun variant.

I think you found an SGF file that demonstrates a bug in OGS’s SGF parser. It seems that an escaped right bracket \] is causing issues.

[quote=“yebellz, post:5, topic:7616”]
I think you found an SGF file that demonstrates a bug in OGS’s SGF parser.[/quote]
Thanks, “I found” may be a little exaggerated — IF it is so then it’s you who realized it

Here’s another version with photo-realistic rendering by BesoGo 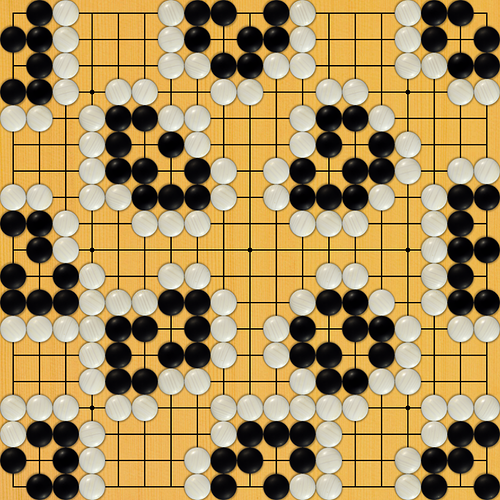 See this link to render the above
http://yewang.github.io/besogo/testing.html?sgf=https://online-go.com/api/v1/games/4992183/sgf&theme=wood&realstones=on

*edit: fixed link (figured out how to prevent auto-eidogo widget)

2 posts were merged into an existing topic: BesoGo: yet another web-based SGF editor

Wow, that looks purdy kewl, @yebellz! (I have moved the rest of the discussion to BesoGo: yet another web-based SGF editor)

bugcat touches electrodes to the corpse of a long-dead thread