I often feel that 13 x 13 is the most difficult board size out of the three for me. It requires good whole-board judgment. Many local moves I play seem to have immediate unintended side effects globally.

Personally I avoid 4-4 openings since 3-3 invasions feel big, so I often play dual 3-4 with either colour. Approaches on the widest side feel dangerous because a responding pincer threatens both your approach and your own corner.

How do people feel about tengen as an opening move (for either colour)?

Handicap stones feel much better placed on 4-4 stones than on 3-3 stones IMO.

I’m not an “expert”, but to me 13x13 differs from 19x19 especially in how players should manage the middlegame and the late opening stage. The first steps of the opening are quite similar: take corners, then take enclosures/corner approaches, then extend to the side by 4-5 spaces (if there are no bigger moves on the board). In 13x13 games I don’t see enclosures very often, as usually corner approaches are also extensions from one’s corner, so approaches seem to be more efficient. Especially a…

I’ve recently been experimenting with a bit of a makeshift “mini-Chinese” style opening on 13x13. Start with the top right 4-4, then a 3-4 stone facing white’s stone, then a low approach to White’s bottom left corner. (See Review: https://online-go.com/demo/205513) I like it since the third move serves as both an approach and a pincer if your opponent ever tries to come near your 3-4 stone. If you manage to enclose the 3-4 corner, it gives you great influence and sizable territory. Another op…

I don’t really like 13x13 and have played only a few games IRL at that size. However, I hate to see your worthy and interesting topic idea get no responses, so…I have heard it said, and I agree that influence is much less important in 13x13 because the center is so much smaller. I know some people disagree with this, but if there are fewer points in the center, moyos can’t play as big a role I would think. Consequently, opening with tengen is probably even worse than in 19x19. The reason I don’t like playing 13x13 is that I find it hard enough to learn and improve at 19x19 and don’t want to get mixed up or used to a different spatial relationship between the corners. It’s fine, of course, as a stepping stone to 19x19, so players can get used to the big board. At the same time, if players enjoy it—just as many enjoy 9x9—then that’s great; I certainly don’t mean to be a killjoy.

I especially liked your comment about approaches in 13x13, which was a new idea to me.

I found this 13 x 13 pro game review by Nick Sibicky very interesting and helpful. He discusses some general aspects of the 13 x 13 board. https://youtu.be/lfARuBqYgqI

There are some pro game records here, including the one reviewed by Nick Sibicky. https://homepages.cwi.nl/~aeb/go/games/games/other_sizes/index.html

IDK what I think about 13. Starting out, showing friends the game at brewery it was all we would play. I dislike 9x9 and no one else was particularly into it… but everyone refused handi and didn’t like retiring so 13 helped minimize the portion of game spend waiting for a resignation

I quite like that it is small and fast enough that it feels like only a slightly larger commitment then 9x9, but still at least has a handful of normal opening moves even if that does start going to hell by move 10… You at least reserve corners and make bases and fight over territory.

It likely has at least something to do with availability of opponents, so until we see something spark a major change it will likely remain the bastard go

13 x 13 is popular on GoQuest (along with 9 x 9) with hundreds of games being played live everyday. http://wars.fm/go13
There are some very strong players including spaceman who is Ohashi Hirofumi (6p) and has recently been commenting some of his 13 x 13 games on youtube (in Japanese) - I can’t understand what he says but I still find these short videos fun to watch: https://www.youtube.com/channel/UCFTkcMid0UOYU34bJnWppoQ

I have played more 13x13 IRL in the past year and have grown much fonder of the game. As you say, its speed compared to 19x19 is attractive. 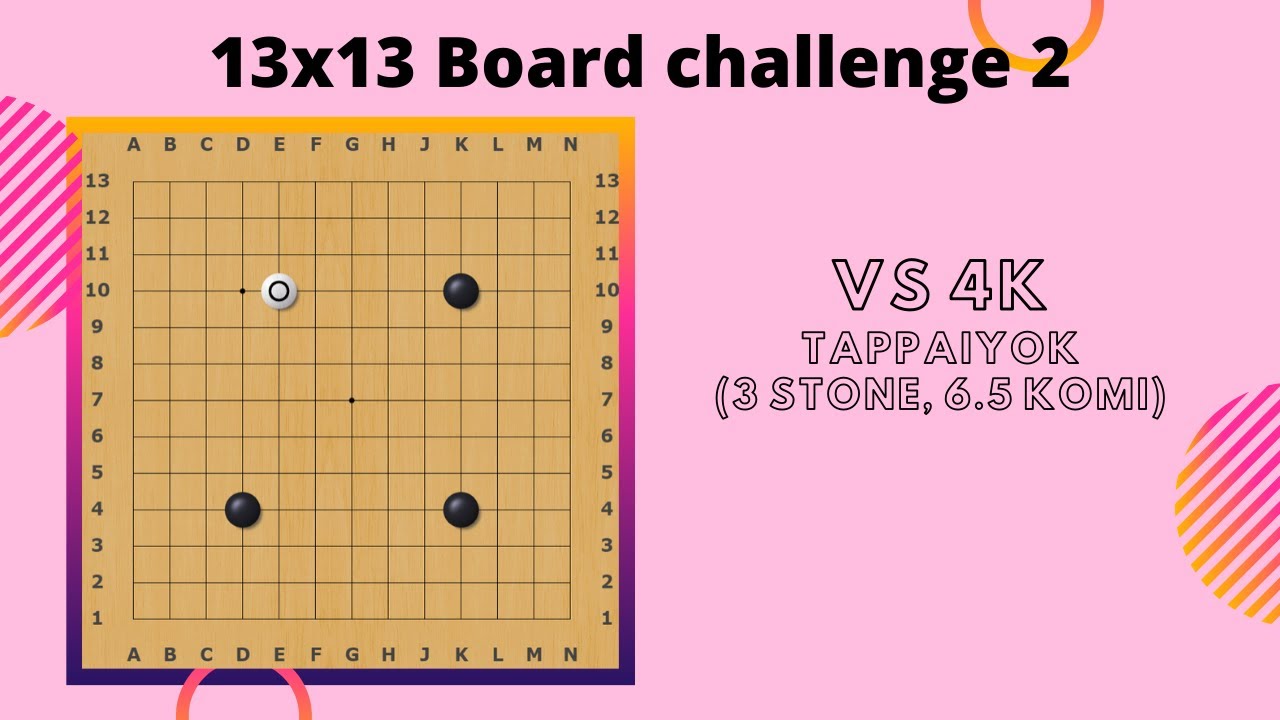 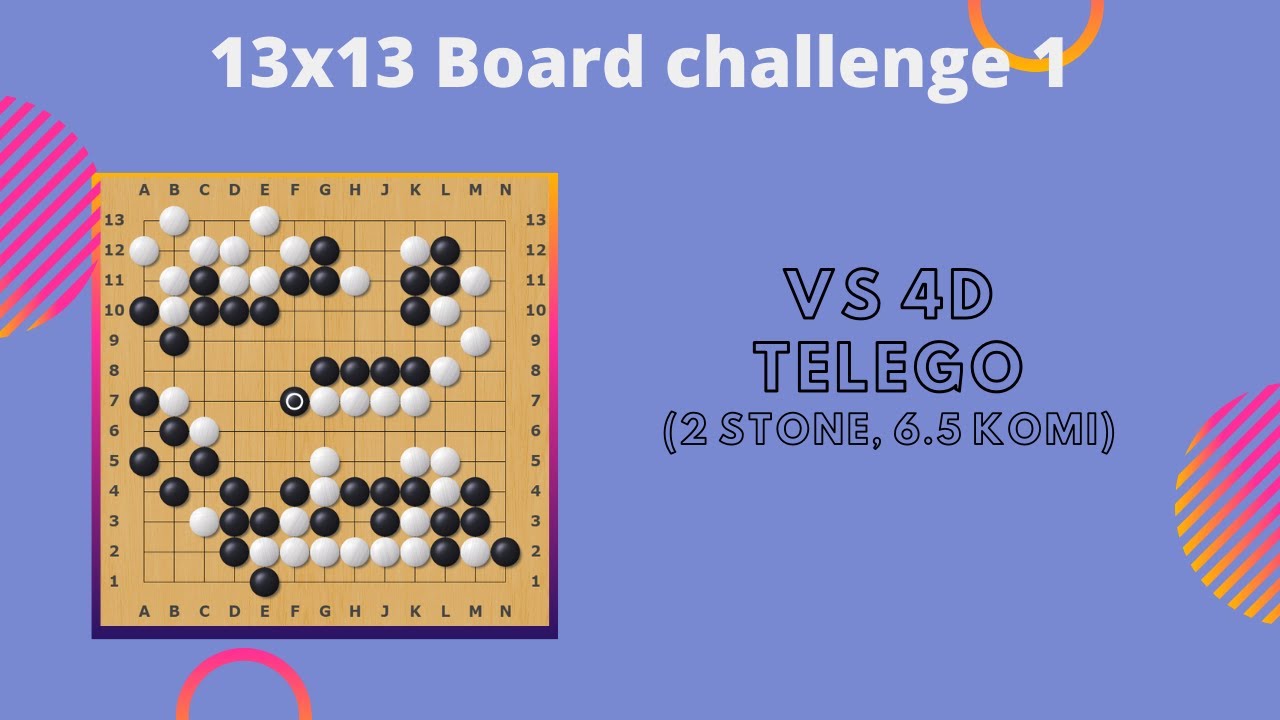 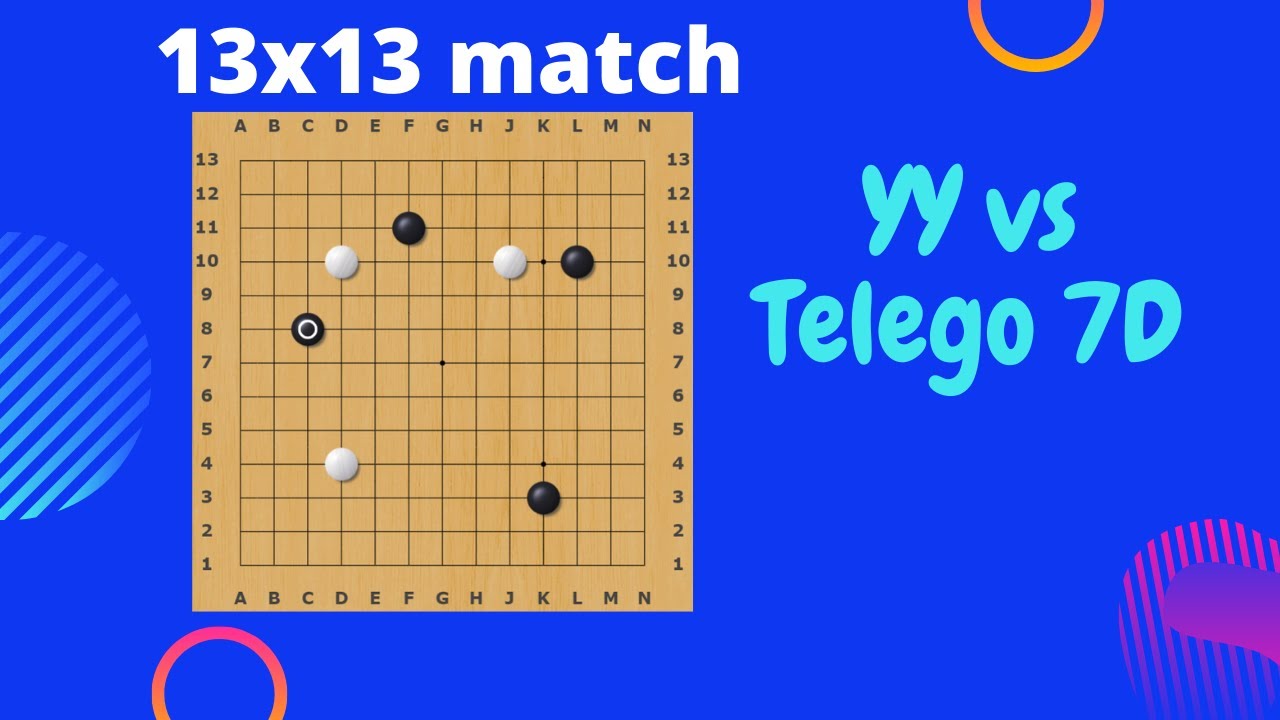 13x13 is fun. I don’t know what I’m doing, but I’ve had some success lately with a great wall opening: 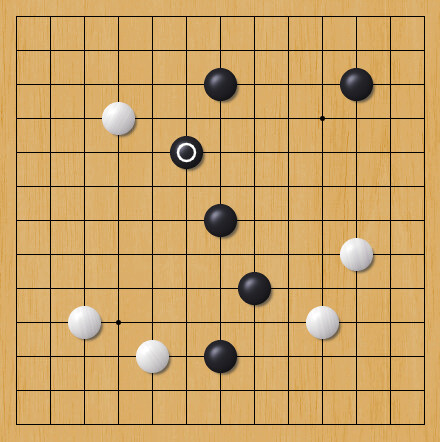 It seems like there’s almost no information about 13x13 openings online, so there’s a lot of room to experiment. I’m going to keep trying this one whenever I can.

That was a win given to you by your opponent…
But sure 13x13 gives a lot to explore.

Why use the win % metric, when the score metric is so much more informative for reviewing?

Now I can see that move 76 was a 60-ish point mistake.
Not only that, I can also see that there were about a dozen 10+ point mistakes afterwards (by both players).

The win % graph it is much less specific. I can only tell that move 76 was a big mistake.

Why use the win % metric, when the score metric is so much more informative for reviewing?

Isn’t the score metric only available to site supporters?

Apparently not. I’m not a site supporter.

It seems like this system is valuing one handicap stone as equivalent to 9 komi points, but if the original komi is 9, the value of a stone should be 18, right? 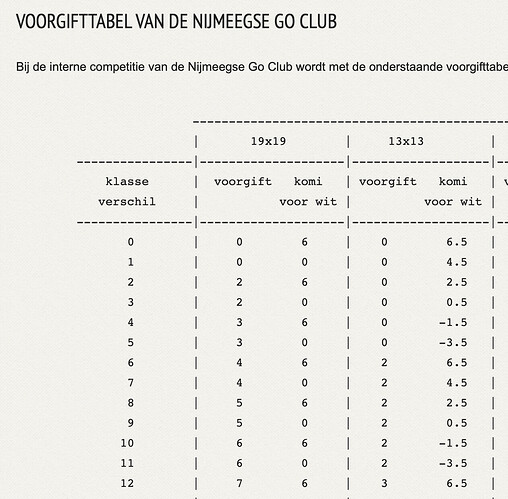 After testing on many games, my great wall strategy was a disappointment, so I’ve changed to a more conventional opening but including 3-3, especially as white: 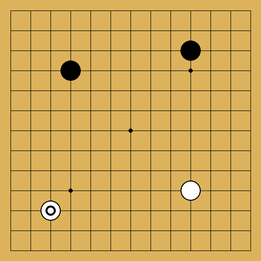 I figure that 3-3 is relatively more important on a small board, while (SDK) opponents used to 19x19 will be relatively less familiar with it.

Later in that game I lost a huge group connected to my 4-4 stone, had almost nothing above the 3rd line, and yet was surprised to find myself still ahead by 20 points. 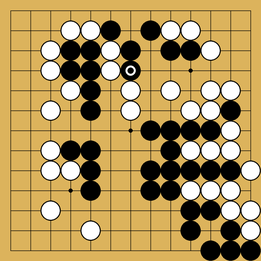 I’d be interested to hear more thoughts on 13x13; I think it’s a great size for quick (and mobile-friendly) games where concepts from the bigger board still apply.

surprised to find myself still ahead by 20 points.

I suppose you resigned because you misread the top? Black is dead there: 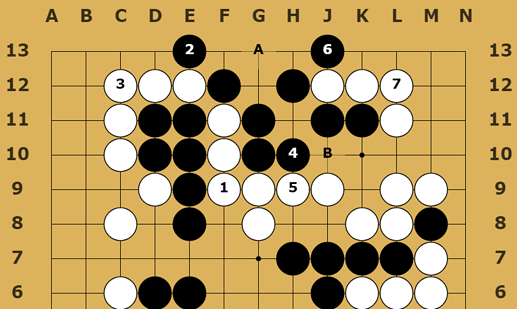