The ruleset of the game should be easier to see

As the title says: as far as I know, right now one need to go to a special window to see which set of rules are used for the game. As automatch can put you in games using different rules it would be nice to immediately see which one is used, for instance below the players’ names.

On the other hand, do we really need to know this information up front?

Which ruleset is in effect has absolutely negligible effect on gameplay for almost all players on this site.

Even if you know that the setting is, say, “Japanese”, it’s not really Japanese rules. The most interesting aspect of it is that you’ll be scoring territory.

So I think the info window is the appropriate location.

I agree it is not an essential information but it costs nothing to put it on the main window. In close games I want to know quicly if playing defensively inside my territory would cost be a point or not.

but it costs nothing to put it on the main window

It does cost something: space.

I don’t think the main window should be made more cluttered than it already is. Is is really that hard to click on the “game information” and check the rules?

I want to know quicly if playing defensively inside my territory would cost be a point or not.

This always loses you a point, unless you’re playing with area scoring and your opponent has nothing left to play. 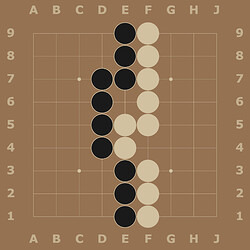 You may think it’s nice to protect D3 as Black, so you don’t have to read out what happens if White cuts. So, you play A, and White plays B: 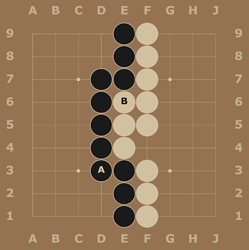 Under Japanese rules, Black lost 1 point by unnecessarily playing inside their territory, White didn’t change the score at all by playing E6, so in total Black lost a point during these two moves.

Under Chinese rules, Black didn’t change their score by playing D3, but White increased their area by 1 by playing E6, so in total Black also lost a point during these two moves here.

Unless all dame has been finished, playing inside your territory will lose you a point regardless of the ruleset (and usually more than 1 point).

Unless all dame has been finished

Of course. Not completly true either as eliminating a weakness can give you more points like a connection which avoid you to have to capture dead stones.
For scoring with bots using chinese rules, it’s advised to capture the dead stones to have a position as clear as possible and it’s then important to know which rule is used. But as i said of course i will finish to take all the points possible first and dame are points.

The mention of the rule on the same page as the game is a loss of place and a visual disturbance but it’s relevant to what you will play later and correct to keep it easy to access. Having to search for it is in some way annoying too.

Not completly true either as eliminating a weakness can give you more points like a connection which avoid you to have to capture dead stones.

This shouldn’t make a difference between the rulesets either, that is, unless all dame has been finished.

That was just to say that endgane is a bit more complex. Not for a difference in the score result between the rules.
If you don’t forget that you have to maximize your territory to the last useful move then playing in your territory will not cost you points in chinese rule and it’s relevant information, like in blitz as suggested by the OP.

It only loses you a point if there are an odd number of dame remaining. Also, you certainly need to know the ruleset (and sometimes handicap) to count the score correctly in endgame. The Chinese and Japanese scores can easily differ by a point or two, which might affect your choices if it’s close.

I agree that it should be visible.

Custom board backgrounds would be a great way to allow this for players who care:

Maybe crazy idea: custom board backgrounds for tournaments, ladders, game types, particular games, etc. Configurable both by tournament directors and in user settings. [image] Makes it more fun, and this way I don’t have to click around a bunch just to figure out what a game is.

It only loses you a point if there are an odd number of dame remaining.

In any case, I want to dispel the annoying and wrong myth that playing in your own territory costs more in territory counting than in area counting, since in the vast majority of people who claim this, it’s not about the very last move of the game, but about creating too much thickness during midgame.

Also, you certainly need to know the ruleset (and sometimes handicap) to count the score correctly in endgame.

For players who have experience of OGS all this has small meaning if no at all.

For players with less experience of the server (not meaning beginners only) you may play a blitz, finish the dame and ask yourself if you have to take away these dead stones in your territories or not. Then checking which ruleset under limited time can become a hassle, even more if you don’t know where the info is. It’s not just about opening a tab, reading, closing all this with some scrolling, it’s about losing focus on the game, searching and thinking on something else.

Well, even if it’s of small importance, it’s still a basic property of the game that can affect your play and even the legality of moves. I’d be happy to see the ruleset and handicap in the player boxes, along with all that other information like captures and komi that’s only relevant if you have time to count the score: 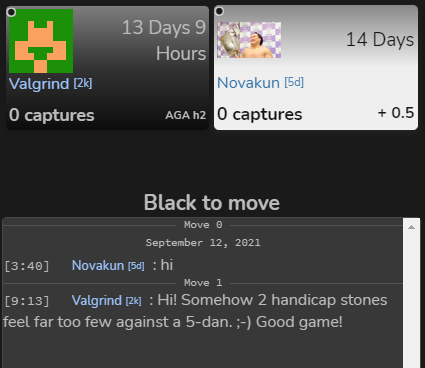 I really like this particular “design” proposal where just a three-letter rules indicator (something like JAP/KOR/CHI/AGA/ING/NZL) and (optionally) an h2/h3… indicator for handicap is placed in a very similar place than Komi currently is.

Very nice indeed but we could need to have komi and handicap at same time sometimes?

Does komi ever go to black??

No, reverse komi is shown by -85 to white rather than +85 to black, so that spot is always free:

I think @Groin probably thought that the rules were put where the komi usually is.

I don’t have strong feelings on if the rules should be shown or not, but I think the design proposal looks pretty good. The only strange thing is that that placement kind of implies that the rules apply to the black player in particular.

No i had the worry that you could have komi and handicap at same time in a game a bit like on IGS but that doesn’t exist on OGS so no worry on this now.

A minimalist alternative could be to hide the captures under Chinese rules, since they aren’t at all relevant to your score. I bet that would drive everyone crazy though!

No i had the worry that you could have komi and handicap at same time in a game a bit like on IGS but that doesn’t exist on OGS so no worry on this now.

You can have that on OGS:

And there would be no problem displaying this just like @Feijoa suggested, since handicap and komi are shown in two different places.

A minimalist alternative could be to hide the captures under Chinese rules, since they aren’t at all relevant to your score. I bet that would drive everyone crazy though!

They are relevant since most people (including Chinese professionals) count territory + captures during the game, regardless of the scoring method.

GoQuest did not originally show captures since all games use Chinese rules, but they added it eventually, I would assume because lots of people requested it

I like the proposed design - looks neat. Ruleset and handicap are essential information and there might not be time to check game info, e.g. if you take white in a blitz game and opponent starts quickly so no time to check before game starts. Sure, ruleset making a difference is rare… but it’s not impossible. I vote to add it to Black’s player card as suggested.