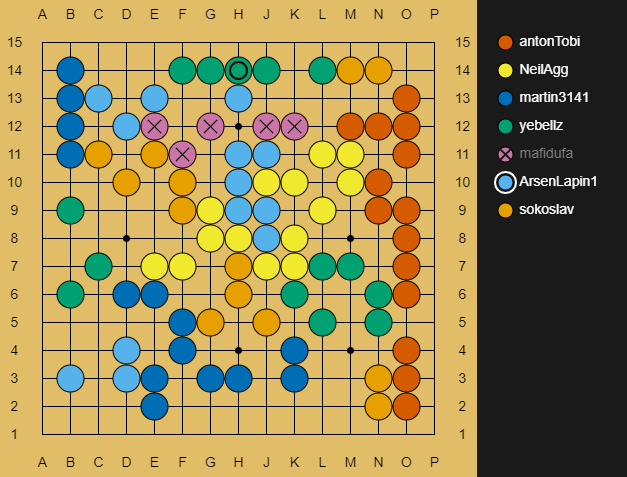 I’m sorry for not discussing it with you first, but our move blocks Cerulean to the east while giving us space for one eye.

No problem, I was just very unsure how to think about the whole situation.

I don’t think we should delete or substantially edit messages (correcting small typos are ok), since that might undermine the public discussion nature of the communication.

I think I deleted the message less than one minute after posting it. I didn’t think anyone would have seen it. I certainly didn’t expect somebody would be able to quote it.

Yes, I did notice that Gold could make a seki with Orange by playing F6. In fact that is the only viable path to survival I see for the Gold stones. Blue and Orange promised that that wouldn’t rush into removing Gold 's liberties, but those two promises are very temporary and I’m sure Gold will be looking for a more permanent way to avoid dying?

Since yebellz resuscitated my message from the trash, what do you think, Gold @NeilAgg and Orange @sokoslav, would you want a seki between your two groups H7 and H8?

Actually I do not understand your proposal, but living long is what I want. Also obviously enough I cannot stop Yellow from taking F6 if they want to.

Well, your group at H6 can make at most one eye of one space, as far as I can see. And this is of course not enough for life.

So an alternative is that if Gold @NeilAgg plays F6, then you have two common liberties as G7 and G6. This is a two-space eye. No other player will dare play in that two-space eye, so that’s a seki and will guarantee the life of Orange’s H7 group, and Gold’s H8 group.

So I just spent the previous 40 minutes looking at the board trying to understand what you were talking about. I give up. Are you going to explain or do you want to stay mysterious about it?

Maybe @NeilAgg can explain, but if not - then it seems I just miscalculated something. I can tell my reasoning later, if you still will be interested.

Blue does not plan to play F6 for the foreseeable future.

Cerulean is forced to play D2 to repel the approaching Blue forces: 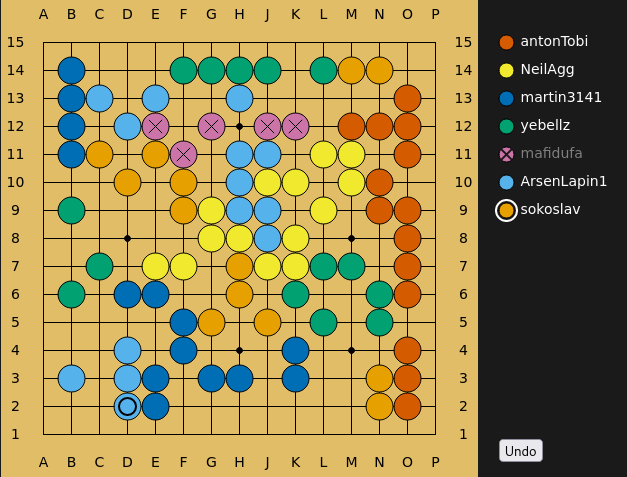 I agree. Playing F6 does not give us anything.

@antonTobi when Orange went into upper right corner, it was the first stone in 5x4 area. I invited you to join me, and you did. Initial motivation was to protect this area together. We did it successfully. Now I want to play O14 and then M15, P14, O15. In this case this oupost will be immortal. Your giant group is already immoprtal as well. Talking about territory: I will get 8 points (with 6 stones), @yebellz took 2 points, and all remaining 10 points are yours. I find it fair enough.
What do you think about it? If you agree, I promise to make no other moves in this area.

I am prepared to give the entire corner to you as proposed, but are you sure it’s the most urgent right now? I promise to not play O14 or P14, if for instance you want to settle your bottom group first.

”, to be consistent with The First Go Battle Royale

Doesn’t really matter at the moment, but I’m assuming there will be a third one in the future, and the titles could get confusing

By the way, we just reached the one month mark of the game!
(start of the game on May 25th)

I believe we’ve played 68 moves in that time, so an average sligthly above 2 moves/day.

Great to hear that! Thank you! Deal.
Indeed, N2 outpost requires some attention as well. L2 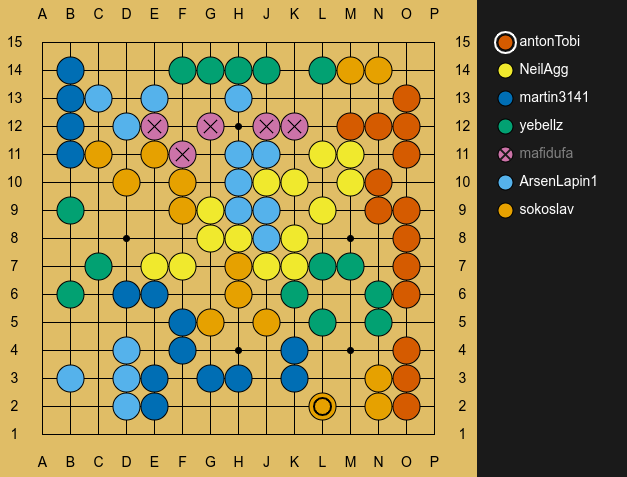 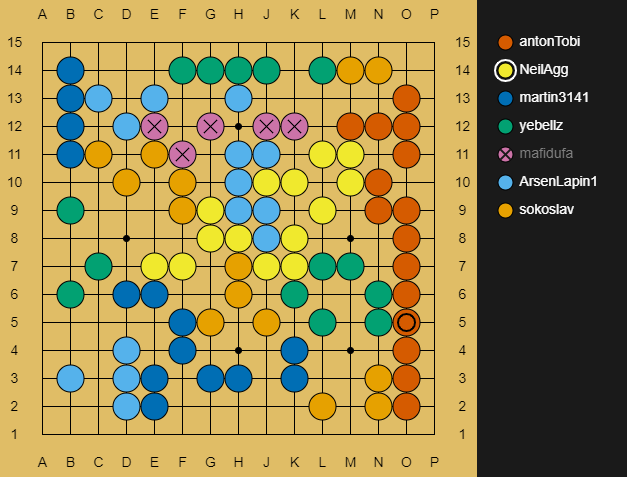 Apologies to @yebellz for filling a liberty. I have no intentions of playing N7 in the short term, so I believe the green group is still safe.

I did not call it the Second because it has different rules, but I have no problem if we want to rename the thread. I don’t know how to do it though.