Issue 1) There’s no black dot on my screen with the number of games I need to make moves in. This is happening when I know there’s a move to be made because it says it’s my turn.

Issue 2) When I click on the “Games” link to watch others play, no games come up at all.

BTW, both of these issues happen on both my iPhone (with Duck Duck Go browser) & my computer (Windows 10 with Chrome browser).

[image] Anyone else? Just me? I just refreshed the page and it was gone.

Thank you for the reports. Yes, the mod team and anoek are aware of the problems, and anoek is working on it. There have been several odd server issues today.

All working for me now.
Thx.

Got that from nowhere (if it can help) 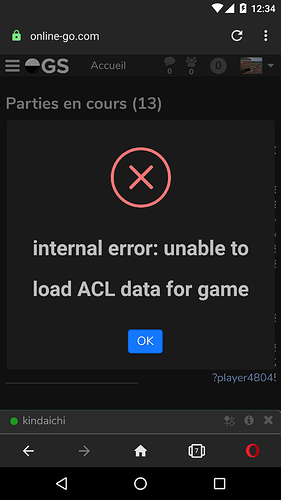 Got it again like 1hr later, still from nowhere

what is ACL data for a game?

like I have only heard of an ACL as in a part of the body that football(well american football, although it may happen in other sports too, idk) players tear sometimes.

About an hour ago I found a game on the play tab. I had difficulty connecting to the game with weird programming bug type error messages ( “>=” not recognised, for example). I eventually connected to the game and won it but it hasn’t shown up in my profile!

I can’t remember the name of my opponent, something beginning with p like pierre, so I can’t check their profile. They might have been canadian so I made an API query to get a list of canadian player names but I couldn’t get past page 100.

what is ACL data for a game?

While I have no idea if this is the intended meaning of that initialism here, the most common computing use of that term that I’m aware of is “Access Control List” - basically a list of permissions for something.

Even more frightening, got this new one: 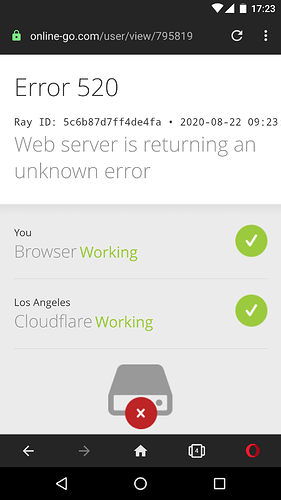 The cloudflare one simply means that you can’t contact OGS at all. Whether that’s more frightening or not I don’t know

Was just unusual (new) format for me. I got new kind of alerts which mean nothing to me as I am no programmer at all. Just hope it helps

Meanwhile, a day later and the game I played is still missing from my profile, and my complaint to the moderators has not received a reply yet. Not even a this-will-take-a-while-to-fix message that would at least tell me my complaint has been received. Nearly thirty hours after making it, my complaint still shows a “pending moderator” message, when I click on the red triangle, which makes me wonder if it got through.

my complaint to the moderators has not received a reply yet

I reported a game five days ago and still got no answer.
I thought they were all on vacation.

It turns out I’m not the only one missing games from their profile. Watching other 13x13 games in case my opponent showed up - I can’t quite remember his name but I would recognise if it I saw it - I spotted another game that wasn’t added to either of its player’s profiles:

The player icons don’t display either. They do display for other games in their profiles. I tired refreshing it a few times to see if the icons would load but they didn’t and one occasion I got a “internal error - unable to load game data” message.

And just now, while I’ve been typing, another one:

I can’t remember if the player icons loaded or not in my missing game but I’m sure I would have noticed if they didn’t.

I reported a game five days ago and still got no answer.
I thought they were all on vacation.

When I click on the little red triangle I get the code R490 followed by a “(pending moderator)” message, followed by the body of my complaint. I assume the 490 is some sort of queue position. What do you get?

It’s not the que position, it’s a rapport id. The number of open rapports is usually between 0 and 50.

thanks for correcting me.

What do you get?