I’ve been reduced to only using an IPad mini 2 for my games - my laptop died. From time to time my move is translated into a position on line 19 - J19 is not uncommon.

I’m sure this bug has been reported before, but I can’t track it down now - any progress? Usually opponents are kind enough to accept an UNDO request, but it’s a pain to be honest.

And if , as sometimes happens my opponent fails to spot my request, I’m essentially playing a stone above my rating, which again is quite frustrating.

Can anyone comment on the status of this bug please?

I’m also having this problem on my Samsung Galaxy Tab. It’s happened in 4 games over the last two days

Interesting, we’ll take a look at this again… I had thought we had kicked this bug.

On IOS/safari, you can put a website icon on the home page. Then when you open it, a safari window will go to that site with a narrower border and less stuff around the edges. There are far fewer line 19 problems if you use OGS on the ipad/iphone that way.

I have this game where my opponent played a Line 19 move, G19 in this case … I’ve messaged them and also notified in chat, asking whether this really as their intended move and offering an undo, but up to today I didn’t get any response: 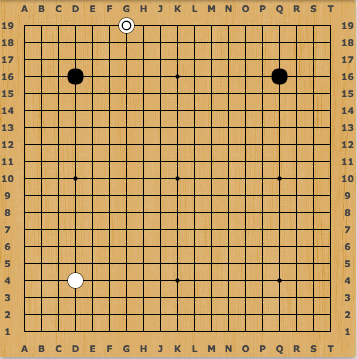 Maybe something has improved since the old days: now I constantly get A19 after

At least the coordinates are constant now

Seems this issue is alive and well entrenched!

ONLY happens when I’m using the iPad (any my opponent says he was using a tablet.

No problems on a PC

Sorry for raising the dead 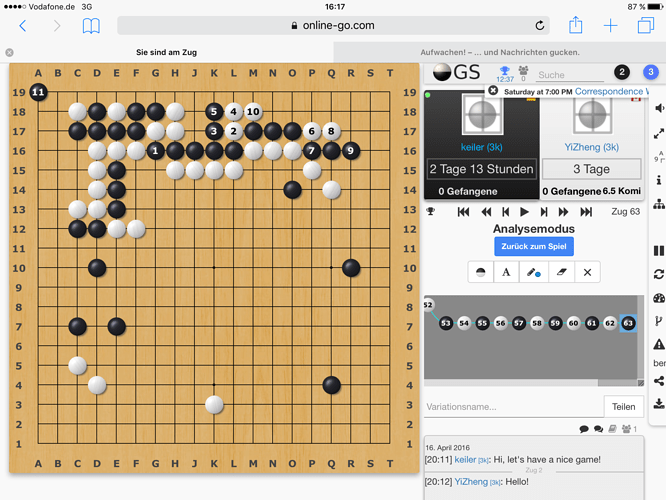 I get this bug quite regularly. For me it mostly happen when I create a touch event somewhere outside the playing field. For example: To openthe menu at the side, to get player info, to open the chat, to scroll back in the analyze mode.

All these touch events seem to be intercepted by the playing field and create a stone place event there at a random coordinate. (This might indicate a bug in the conversion routine that detects the clicked location from the event).

Hope this can get fixed, as it’s really annoying.

This is infuriating. It even happens after turning on submit to play for all games. I hate to ask for undo so often, multiple timjes per game. Not very fun. I lose enough due to my own ineptitude and then it feels like the site itself conspires to make me lose even more.

I wonder if this bug has to do with zoom level?

I can't say this with certainty but I suspect this is a similar problem to the line 19 stone placement bug that is being hunted down with some tenacity. This is the bug where a stone will randomly jump to line 19 when the submit button is pressed (or if the move is automatically submitted). I notice the line 19 error most prevalently after the tablet screen has redrawn to accomodate the keyboard (for example, should I type in the chat window before making a move). I don't know if this reliab…

Zooming in doesn't work properly on Chrome 49 on Android Support

Hi, Love OGS, and love the web client on mobile. I've been having a problem with it in Chrome on Android, though. When I zoom in on the board (to make placing stones more accurate), touching the screen ends up placing stones in the wrong place. Is this a known issue? If not, I can make a video to show what I'm referring to.

Hello again,
This error happened to me again yesterday. Using my iPad I tapped move D12 and then “Submit” and the move jumped to J19. I immediately asked for an undo and thankfully my opponent agreed.
This is the 4th time this error has occurred while using my iPad (and only on my iPad). A resolution would be much appreciated.
Thanks,
tzorec

Still happening to me with the submit move option on an iPad.

Can we assume that this will be fixed?

I wanted to support OGS with becoming a site supporter but I am using an ad blocker until this bug will be fixed and do not use OGS very much at all. It is too annoying asking for undoing moves. In the meanwhile I have doubts about OGS and mobile support; it does not seem to be important for the developers. It is too bad, I thought OGS could become a really good alternative to other Go servers.