“Thank you for coming today.”, spoke her majesty. "In peaceful times like these, it is of utmost importance that we expand our empire.
To the south lies the vast unclaimed territory of gobania. You were chosen for the important mission of settling it. Congratulations!
Go forth, build villages, and bring our culture to any savages that may live there. You will be supplied with anything you need.
Should you be successful, you will be appointed as duchess or duke and rule over the lands you claimed."

You head back to prepare. “Peaceful times she said?” you think to yourself. “Pah … she must be ignorant of the rising unrest and rebellious urge of her folk.”
But no matter. You know who you are loyal to, and you will make the best of this situation. Only keep in mind to choose your allies wisely …

You will shortly receive your secret starting information via private message. Do not invite anybody else to that PM thread. 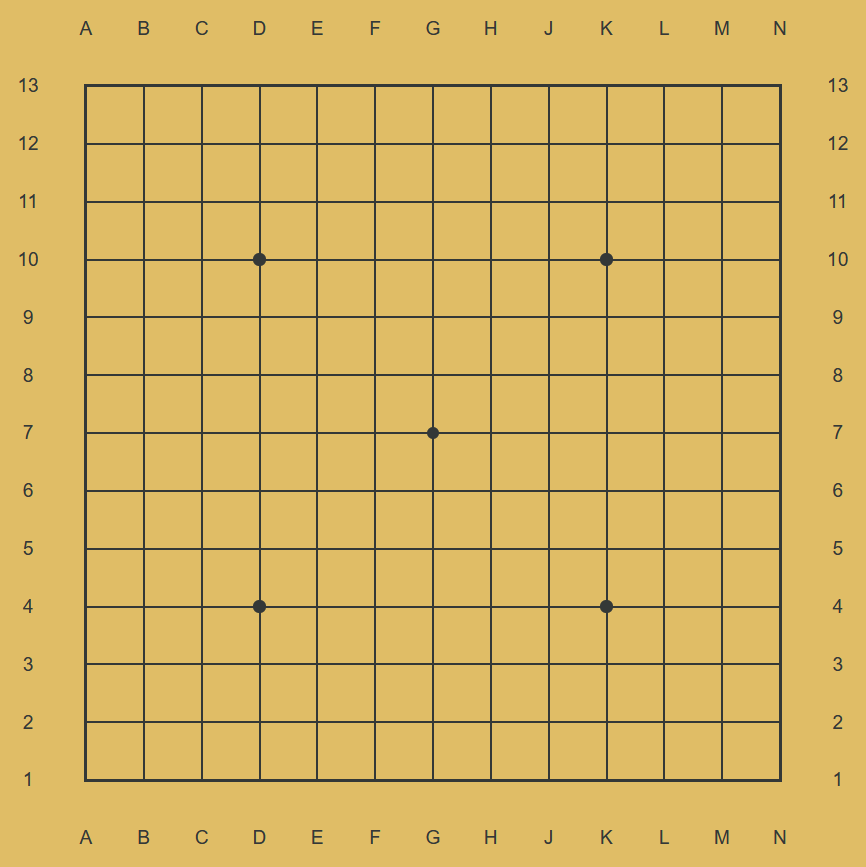 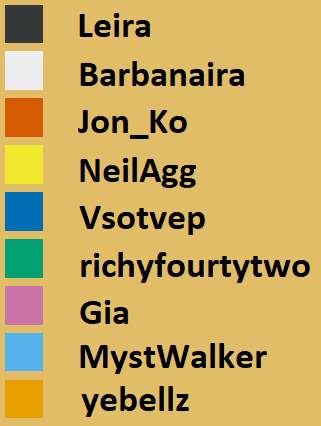 I was born to be a Duchess.

I claim territories and the color pink.

Come with me, allies, and let’s settle in these lands. And may only passes remove our claims.

So, are the visible colors assigned in the same order as the playing order

Leira the Hermit, sworn to silence by his monastic order, places a grey hut atop Tengen mountain.

What Up Fellow Aristocrats!?

It’s ya boy, Viscount yebellz!!! From the Oranje Nation

!! Listen up, I’ve figured out how we gonna run this goban and smack those filthy rebels outta here!

rebels. Just divide it up evenly into

pieces, everyone gets to live with the same amount of space, and BOOM! Settlers Win!! Any one tries to act up and mess with our plan… well they must be a ReBeL sCuM and they get the

Alright, here’s another plan, we consider doing purity tests. Test if stones cast into the eyes of others are captured or remain safe. That should eventually gain enough information to work out the factions, then we as settlers can press our advantage to win.

My color is Golden, which should be easy for me to remember since I am playing another game with that color.

I have no idea about strategy for this game so I am open to suggestions and advice at any time!

Hello fellow settlers. I stem from a long row of noble ancestors, but my grandfather, Richard the 40th, had a gambling problem and lost all the lands of our family. Now, here in Gobania I see the chance to re-gain wealth and honour for my family.

Let’s make sure not to let any of the good, fertile land go to waste by leaving it to those dirty rebels. These cowards don’t even reveal their identity, which I deem highly dishonourable. But the good Count has already made a reasonable suggestion. Let’s try to tear down their masks as quickly as possible!

Beware, fellow settlers, in no time we will be asked to chip in to build a 3km wall.

Greetings, if any of you wish to share borders with this humble merchant, I’ll make sure that it will be worth your liberties. May our shared riches mutually benefit us and may we create a truly priceless empire.

However, I will not trade with any of you worthless rebels. Your thieving and looting is bad for business. scoff

@Barbanaira, I believe it is your turn.

Up the treacherous mountain pass, gossip broke the tediousness of the journey.

Fray Xavier: [casually] Did you see Barbanaira at the Audience with Her Majesty?

Sor Juana: [low voice] Nobody has seen him downtown in over three weeks, but the Chaplain told me he spotted him playing a weird game of checkers at some pub in Oguesville. Rumor has it he’s been kidnapped by traitors.

Strangers from distant lands, friends of old. It is a great pleasure to meet with you join in the settling of these new lands. May we prosper in harmony!

As for my first settlement I claim K4 for the house of Alvetern, the Ever-white.

Settling far from the hermit just like a person who’d want to hide their rebellious nature would do. I beg for forgiveness if this turns out to be a false accusation, but your behaviour does raise suspicion.

Greetings fellow settlers! Usually I seek wisdom in the night sky, but looking at Gobania has me notice the untouched lands in the upper right. Therefore it pleases me to place my first stone at the star point K10 (EDIT: reading coordinates is hard). May the primus inter pares lead our peoples to prosperity.

@richyfourtytwo, seeing as how you’ve reacted to Barbaneira’s decision, you might question mine too, but I ask you to refrain from such accusations this early after the genesis of space and time, as no one has any insights on their potential neighbours yet. Before the morrow Venus will rise with the Gemini, reminding everyone that although two fellow human beings might look the same, one can still tell them apart if one is willing to learn and see the differences. As of now we are not able to see the distingiushing features of a rebel, but wisdom will come in time.

I think this is the current board state, and it is @NeilAgg’s turn 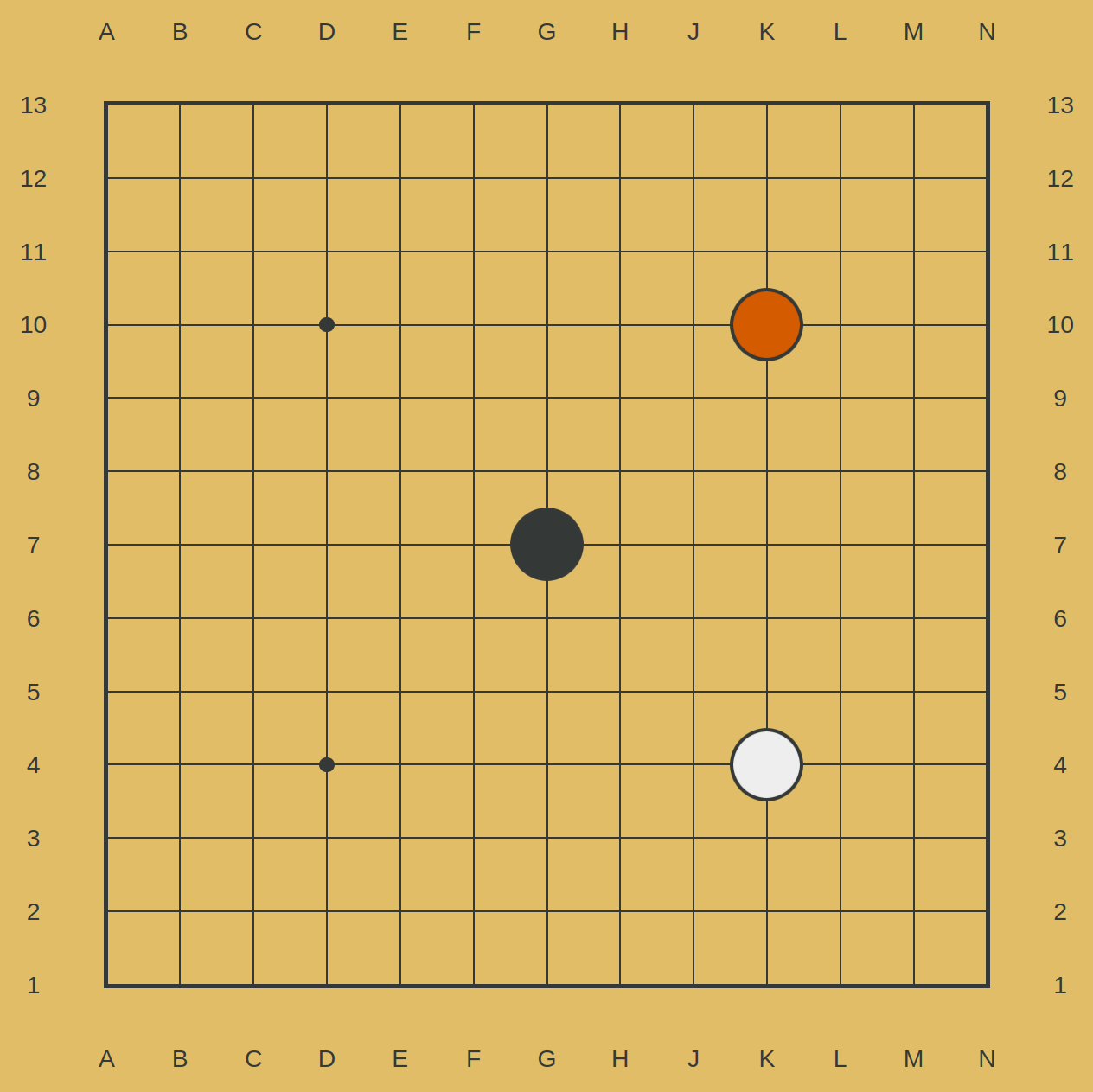 Having no idea of the proper moves to play in this game, I will continue the pattern established by others and play D4.

Here is a pic from the link @yebellz posted: 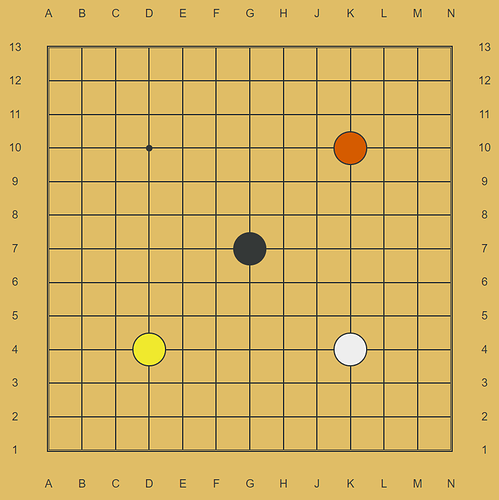 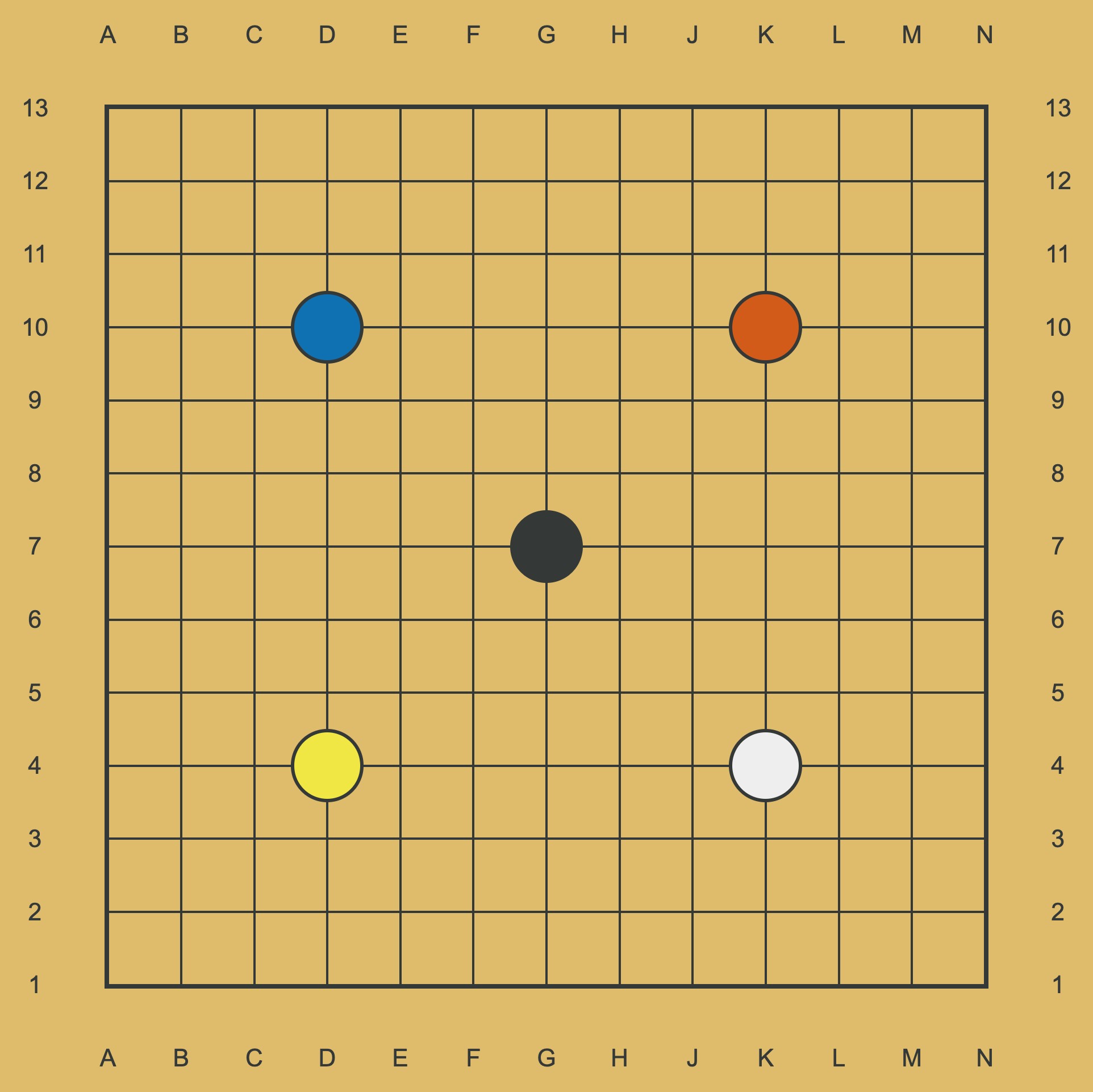