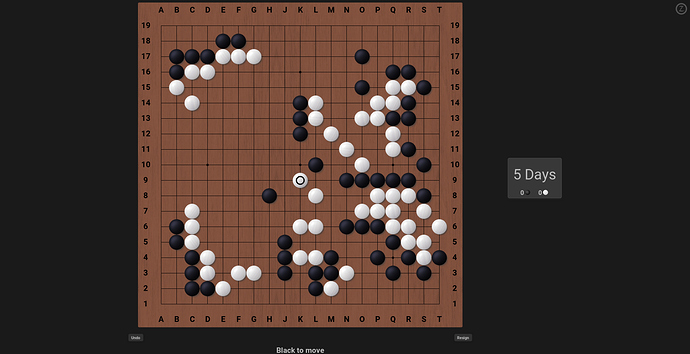 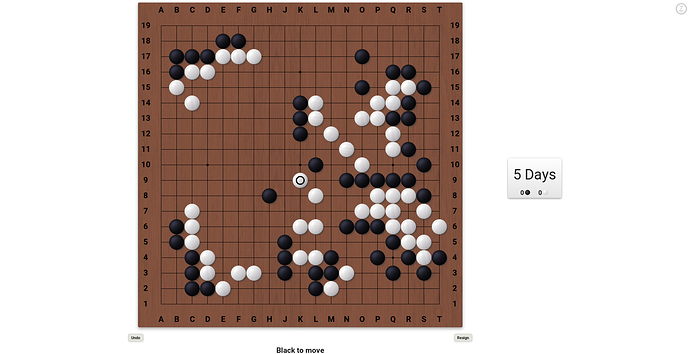 It’s still work in progress, but we would appreciate some feedback of Zen-Mode users, if the design fits their needs.

Right now, the idea is to show only your clock (never the clock of the opponent) and the captured stones of both players on the right side. Is the opponent’s clock needed as well (especially for live/blitz games)?

On this note, I’d also love to hear if anyone has opinions on the positioning of the game state/play controls and on a mobile device.

I’d definitely like to move the play controls to the right bar and maybe delete the game state altogether (something like the top left in this).

I’m not much of a mobile user myself – any thoughts on whether to have a clock and where it should be?

I’m bewildered that clock on the right on mobile gets that many votes. Just to make sure, this is about portrait mode (display higher than wide): 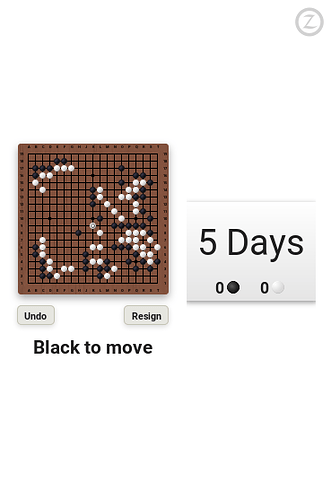 Since anoek wants feedback if the opponents clock should be shown as well:

For correspondence games (in zen mode):

For live/blitz games (in zen mode):

Would it not simply be easier in the long run to have a customizable Zen mode? much in the same way we have customizable options for the rest of the site… that way if people want both or none or only one of the clocks to show then they could choose those options for themselves? The same can be said about other issues. Some people might prefer the clocks on the right… some on the left, and so on… so why not give them each an individual chance to set it how they like.

I would also add a suggestion to allow for picking the size and indeed contents of these clock sections… Contents being… time periods, time, names, and captures.

I believe the general response to such suggestions is “the front end is open source, so if you want to implement that, go right ahead”

Oh would that I could. But i cant code, even if my life depended on it. And I’ve tried to learn… multiple times.

Im not an angry person at all. But… spending nearly an hour looking for a missing “>” made me nearly hulk out and kill my computer.

Im great for ideas, but the practical application of ideas… I havn’t a leg to stand on.XD

In all seriousness, the scope of the project you suggested is much, much bigger than the one we are discussing. There is a very big difference between changing how the static environment looks and introducing multiple display toggles that all need to play friendly with each other.

Just to make sure, this is about portrait mode (display higher than wide)

I didn’t realise that when I voted. I’d like the play controls and game state to the right of the board in landscape mode.

I didn’t realise that when I voted.

You can still change your vote

I don’t use a mobile device to play Go so I’d prefer to remove my vote. The best I could do was select all the options on the first vote and “other” in the second vote.

I will be honest… no , I had absolutely no idea as to the size of the project I was suggesting. But having said that, and now understanding, I do still think its worth considering. Especially if this is sone, it would solve problems later down the line I think. Do I think this is an urgent must have project? No. There are bigger fish to fry on OGS I think. So i completely underastand if this does not get persued any time soon.

That my ideas get listned to though… is an incredible experience, its nice to have my ideas taken seriously, even if they are not exatly something that is realistically possible in there here and now. And im always racking my brains for ideas to make OGS the best place to be for GO.

It’s a great suggestion, and in a perfect world I suspect that’s exactly how we’d do it. But with just one roughly full-time dev and a handful of volunteers, such an undertaking is likely too large and also, as you say, not the most important use of our limited resources.

Much appreciated <3 sometimes the idea is the hardest part, so keep it up <3

I can at the very least promise to have ideas. Its what I do best.

Lodging them here is absolutely fine (and a great place to get community feedback and engagement) but you should also feel free to lodge some of your favourites as a feature request on GitHub.

This is indeed something for me to look in to. Thank you for the recommendation.

What about mobile thingies that change view when you rotate the device? (Do they all do that meanwhile?) Controls and state should move to side then, no?

When rotating your mobile thingy, you’ll first see an aestetical rotation animation followed by a less appealing blink as the browser renders the page in the new layout.(at least it does that on my talking thingy)

If you have a rotating thingy at hand, you can try how it feels. (The normal game view already places the clocks above the goban when the entertainment thingy is in portrait view). In case you don’t have such thingies at hand, you can narrow your browser window until it’s higher than wide. The layout will then change as well.