Our AI review system has been updated! Here are a list of the changes:

More improvements are still in the works, including having the top 3 moves for full reviews listed, being able to see the ghost stones after selecting an analyzed trunk move in a top-3 review, better top-3 move analysis, and some corner case bug fixes.

Cool! Thanks for the update.

Review strengths have been increased by about 25%

Does this apply across all of the review levels? With games that have already been reviewed, can they be reviewed again?

Yes to the first question. From https://online-go.com/user/supporter

Does this apply across all of the review levels? With games that have already been reviewed, can they be reviewed again?

Yep, all levels. They can be reviewed again, though it’s a little clumsy at the moment - if you select the “top 3” moves from the little review selector button, and then click “Full Analysis”, it’ll kick it off again with the new settings. I plan on making a better interface for that since the AI’s are still getting better as is hardware etc, but for now that’s the clunky way of making it happen.

The win rate being displayed makes it much easier to use. Thanks!
Are there plans on including the AI analysis when you start a review? I end up reviewing the game with the original in a separate tab so I can use the bot moves.

Great stuff! The output percentages really do match the strong evaluation now. I re-visited my own test case blunder to confirm this. -> -64.5% for move 81!

There are however some leftover issues with the presentation of the data.
(and just to be clear up-front, I love the little circles and delta-pp, it’s very informative! 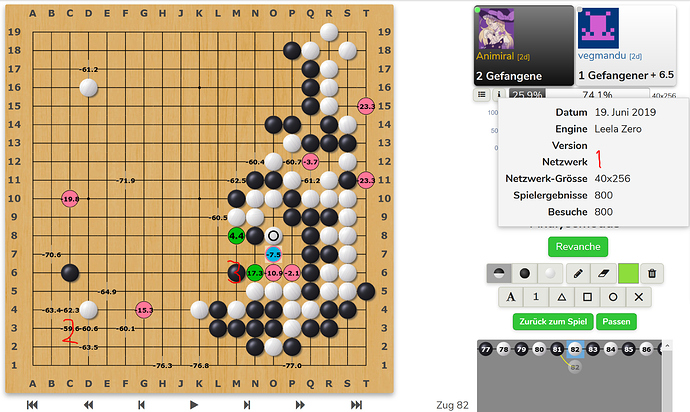 If black can gain 17.3pp by playing N6, then the value of the current position is not 25.9%, but 43.2%. It is generally only possible to lose percentage points by committing mistakes.
As a rare exception, it can happen that Leela sees a variation more promising than her #1, but due to lack of exploration in the branch, she has no confidence in the result and thus prefers the “weaker” move. However, I see these positive moves far too frequently, even in the opening.

All these green moves create the impression that one could make gains by playing genius moves, which is just not true.

Of course it might be more useful to make it like that but can we have it as beautiful shades of green as before? Leela Zero is not Lizzie and it’s not OGS. The new AI feature looks like a kid worked on the board with a potato stamp…

I still see a lot of these positive-percentage moves.

Yep, me too. This part does not seem to be solved yet. (And imho figuring out this is a lot more important than discussing colours, though yes, I agree it’s not exactly beautiful atm.)

It’s an awesome feature that just got even better!

I retract that. I had been looking at an old analysis which still coexisted with the new one. The new one looks fine actually.

My only concern – visually parsing the board. With the A, B, C, D options from previous version, it was a bit easier to navigate, and find the preferred move/response.

Given a smaller screen size (say, tablet or phone), reading the percentages and finding a few preferred moves is at times quite challenging.

Perhaps a sidebar list of the preferred half-dozen moves, listed in order?

That’s all. The overall AI is absolutely smashing!

Ah, OK. I know little about AI and didn’t look at the network stats.

SOunds amazing, I’m glad I donated when you all put so much care into this