I would like to speak to the person in charge of OGS please. Thanks

Why? People are making so much fuss over this, but all it means is that the rating system is giving priority to being correct over some arbitrary rule like “wins must always increase rating”. It is a gesture of respect to the OGS community to show us this and trust us to understand that it will work, but instead many people are complaining about it. I would hate if all these groundless complaints resulted in a separation of displayed and backend rating, which would be an insult, arguably deserved at this point, to the OGS community that they are unable to handle the truth.

Excuse me? What is rating for then? Hmmm I dont wonder why so many people are no longer coming to play here.

rating system is giving priority to being correct

People are making so much fuss over this

but happiness of users should not be ignored too

truth is - your real strength in go is different when you wake up and before you sleep, so there is no reason for such “good” rating system
what is more important:

2020 Rating and rank tweaks and analysis

When you train a dog it’s important to give it a treat when it does what you want. Rating points is a treat. You play good, you get the treat, you see the number go up.

truth is - your real strength in go is different when you wake up and before you sleep, so there is no reason for such “good” rating system

Yes, which is why there is the variance.

What is rating for then?

An estimate of playing strength.

What is rating for then?

Rating is there to make it possible for you to find a match with an equally ranked opponent. If it goes down when you win, but actually has a more accurate estimation of your rank, then the rating is doing exactly what it is there for.

That which seems suspicious often is. If you win a game against someone and see your rating decrease, it’s reasonable to ask if the latter rating is really more accurate. (I mean, would avoiding that game have made you stronger? We all know that’s just not true.) There should be a better way of doing it, and I think @anoek has all the tools available to him to make the best decision for the server. I know he has rating improvements already in the pipeline.

So Mark has provided hope that the current system will be improved, acknowledging that it’s not an ideal experience.

Meanwhile a reminder about what is going on in the calculation:

Do I get this right: Your new rank is calculated from your rank 15 games ago, plus the effect of the most recent 15 games. If that game, 15 games ago, was a loss where your rank went down from before, then your starting point for the calculation is now lower than it was last time your rank was calculated.

It’s all about your opponents, not just you. They were in some way overrated so…

If you progress your rating will too, no worry, it is just a bit more as 2 consecutive wins.
For example to be 1 rank higher doesn’t mean you win all the games against someone 1 rank lower, it will be more like 60%. The system is as precise as possible and very responsive too. Keep winning, surely your rank will get higher.

I won a game by timeout and my rating did not increase. /s

Even if the rating system is working as intended, the way it works is confusing to players and should be made more transparent.

For example, how do I know which of the following timeout wins affected my rating and which did not (unlike cancelled or moderator-decided games where it is clearly indicated that they are annulled)? 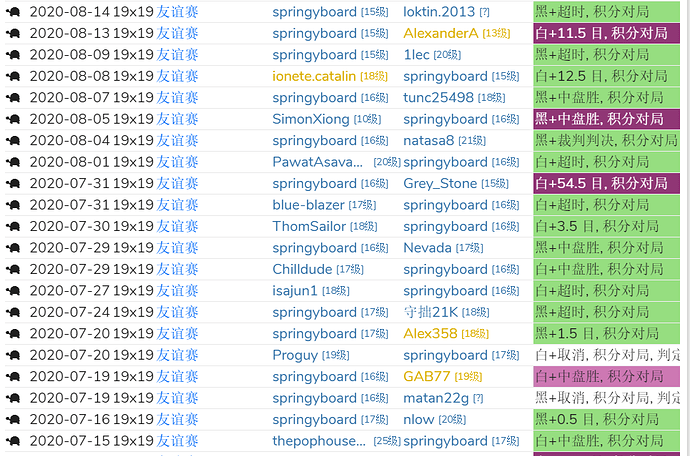 The moderators, and elder moderators developers, cannot manually change your rank, so you will have to play more games.

The system works by taking a 15 game window. Each game gives you a certain number of new ranking points, once you’ve established a stable rank. The approximate values of the new rank points are here. However, if you have a win against a far stronger opponent, and your new game takes that outside of the 15 game window, and replaces it with a weaker opponent win, then your rank will go down by the difference.

As for @springyboard’s question, correspondence timeout wins are annulled as follows:
If a player times out of one (1) correspondence game, it will count. A “Has recently timed out of a game” thing will come up under the player’s profile. The marker goes away once the player concludes a game by resignation or scoring. If the marker is still under the player’s name, then all subsequent correspondence timeout losses for that player will be silently annulled. This is to prevent rank from being lost by mass timeouts. Chances are, if you win a game by timeout and don’t win rank, it was because of this. These games do not show up as annulled at all, and still show on the rank chart, but their rank point difference is set to 0.

Also the person in charge of OGS is anoek, but he probably gets so many messages, and he can’t do anything about this, so DON’T CONTACT HIM ABOUT THIS.

I think it’s explained how it works somewhere (and it’s complex).
Now when you get a yellow belt in art martial or green… Do you ask your teacher why it’s not quicker, do you complain because the first time you put your opponent on the floor you didn’t get a promotion? Kyu and Dan are inspired from this art martial system.

I think it’s explained how it works somewhere (and it’s complex).

That somewhere is here

You were quicker, thanks for your explanations, even there is more about glicko and so on… Just bit not so interested myself to search.

Where are all the people complaining about their rank going up after a loss?

I guess people like that a lot. Which gives us a hint about how the perfect rating system would look like!

Maybe start a new topic?
I lost a game but my rank went up?

Kyu and Dan are inspired from this art martial system.

Actually, it’s the other way around: The martial arts folks took their Kyu/Dan ranks from Go.

gives us a hint about how the perfect rating system would look like!