Ethics - when to resign

Hi, I’ve been wondering if there’s some kind of ethical code about when to resign.
It happened to me a couple times now that I made a big mistake and kept playing, and sometimes there came unpleassant results. For instance: the other player resigned. I really would have prefered them to say: “you already lost, can we end this please” or something like that, then I would have resigned.
Or another time, the other player just left the game, and let the time run out. I waited to the last second, and then resigned before his time ran out. Would have been more polite if he had told me that he doesn’t want to play on.
Also, recently, the other player started insulting me.

I seriously don’t mind resigning when I am in a losing game, but I tend to play till the end, not out of sadism or to hope the other person makes a mistake or to annoy them, but because I think I could still learn from the game, or even learn about minimizing my losses after a big mistake. And I’m sure that if the other player would simply play safe, not engage in any battles, and play defensively to attain a small margin of victory, the game doesn’t have to drag out that long.

Any thoughts on this?

When you are far behind, resigning is good idea. You both would learn more by playing more games instead of continuing this one.
BUT: you should never resign if you are not sure that you are behind.

You could offer to resign if you think you’ve lost the game but want to keep going for the learning experience.

I think I could still learn from the game, or even learn about minimizing my losses after a big mistake.

This is entirely a good reason to continue playing.

the other player started insulting me.

This is not acceptable behavior from your opponent. Please report instances like this.

Or another time, the other player just left the game, and let the time run out.

It’s possible that your opponent had some sort of emergency come up, but if this was done intentionally, that would not be acceptable. Continuing to play in a game, even all the way to scoring, is acceptable, and is not wasting time. Intentionally timing out to waste another player’s time is not acceptable. Please report instances like this as well.

Thanks for the tips,
Concerning the reporting, I do agree, though it’s sometimes a bit tricky to estimate what is reasonable and what not.
But I also see that in some cases it would realy be better if I resign a bit sooner. Though it must be said; I recently resigned a game I was wining… Best not to get emotional about every mistake.

Maybe you could apologize in advance. Like say in the chat “I’m in a bad position but I’ll try to fight my way back” or something like that.

Asking your opponent to resign, or saying the game is over, even if done politely, is not a good idea. In the majority of cases that will spawn acrimony.

Neither you nor your opponent should stall, which should be reported and is a bannable offense if done habitually. There are three kinds of stalling: (1) playing self-atari moves for no reason, (2) infilling your own territory for no reason, and (3) repeatedly rejecting the score and then passing. Beginners often do #1 and #2 because they don’t know any better, so the mods instruct them on proper etiquette. #3 is just inexcusable cheating.

players are afraid to press resign button - (“what if I am wrong?”)
it leads to a lot of wasted time, conflicts or even bans.
there is easy fix to prevent a lot of such cases: “safe resign” button

So first even if you are clearly losing you have the right to finish the game. Even pros do that sometimes and noone are going to ask them why.

Second is i don’t think it’s a good idea to continue a lost game for some learning hopes. It’s going against yourself, against your estimation being by calculation, reading or intuition. It’s hurting yourself.

Last is about some courtesy for your opponent, if you reach the small yose, you should stand the counting and not resign at that time.

You could simply look at the move counter. Don’t even think about it before move 100. Assess the situation at move 200. At that point the board is so full that creating a comeback complication will be difficult for either player. By move 300 you can count already.
*These move numbers apply to a kyu pleb like me. Your favorite numbers may be different

One reason you can’t learn from continuing a clearly lost game is that you won’t know what your opponent is trying to do. He might be trying to maximize his lead, keeping the win as safe as possible, finishing as quickly as possible, building amusing shapes, or even playing to win by exactly half a point.

If you don’t know what strategy you are playing against, how can you judge your success?

Once i unvolontarly tricked my opponent in a taisha joseki at the very beginning of an IRL tournament game. He played maybe 4-5 moves more and resigned. I was full of respect to him.

They probably do that, because they can assess the situation fairly accurately. So it might be early in the game, but they assess the game is decided, because they are 30 points behind with virtually no chance of coming back, given the board position and the level of their opponent.

But when two 20k players get the exact same board position in their game, I think few people would expect an early resignation. Both players have less accurate positional judgement, so they may not be aware of the situation. And both players are bound to make significant mistakes in the rest of the game, so even if they are aware of the situation, the game would be far from decided.

and the level of their opponent.

Yes, i forgot that detail… I mean if you got the chance of a 30 points advantage being a 1d against a 5d, not sure he will resign yet…

I had in mind serious long games for what i wrote before. With practice you get the conviction that it’s no sense to continue a lost game with someone who has the same focus and level as you. The chance of reversing a lead is much higher in a blitz game or in a light hearted casual game.

For me it’s reasonable to resign when the life and death status of all groups is clear, and when my opponent’s solid points > my solid points + my potential.

However it’s not always easy to assess the life and death status of all groups. In this game Tournament Game: Kuksu Main Title Tournament 14th Cycle - League D5 (79605) R:1 (eltjopoort vs jlt) my opponent resigned although the game was perfectly even, maybe he thought he was dead at the bottom right.

I don’t know the answer, but these games are showing when I resign in practice.
I was white: 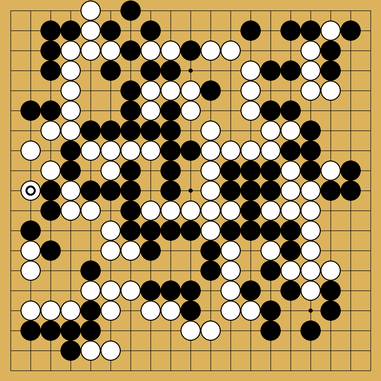 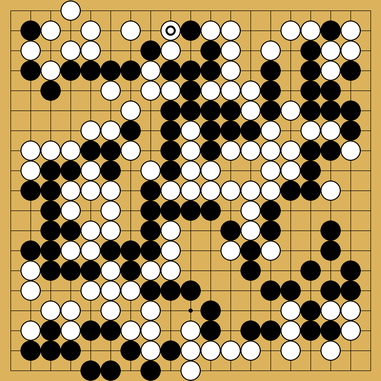 What would be the etiquette when it comes to opponent pausing a game that’s practically in resign stage, do the pauses even have a time out on OGS? I’ve found myself in a situation where I only have 4 correspondence games with 2 being paused by same player and one opponent on vacation lol

Pauses don’t time out, but they’re exclusively by mutual agreement. You are free to cancel a pause at any time for any reason (or none) and the onus is still on your opponent to not time out.

If they’re doing this poor behaviour in multiple games, please report this user so we can more deeply investigate their logs in case there are many others they are holding up in this way we can warn them it’s not acceptable here.

To me pausing a game is a favor you give for some exceptional reason. So i would ask for some communication about it, why, and when we resume. I would feel free to unpause after that if i think that the answers are unsatisfying (with a warning).

Either player can resume the game

That means that without some communications, it is a good reason to not accept constraints to check that your opponent didn’t resume the game (inadvertendly or not)

Yh that’s what I was thinking, I’m going to give the benefit of the doubt as my opponent seems quite pleasant, The pauses happened without warning and the games have been paused for 3+ days now, I’ve looked at his profile and it doesn’t seem like he has been playing any other games or shown any activity so will leave them paused for few more days then maybe drop him a PM or something as it’s only correspondence anyway