What are foods you’ve never had before?

If we can put the food we just discovered, i’d say olive juice and olive vinegar.
Thee is a lot of animals I never eat like crocodile, monkey…

Ah, rollmops … my mouth starts to water already.
(In Dutch we write it with only one letter l.)

When I was young (half a century ago) I was a choosy eater. Didn’t like fish at all, but rollmops I adored.

Here are some photos of rollmops. 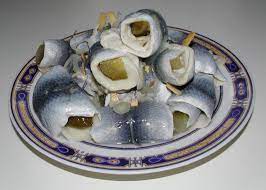 The put a rolled herring (with a slice of pickle, and sliced unions and carrot) into vinegar. The herring is raw. Not only Japanese eat raw fish (sushi) but the Dutch do it also.

Now I hear you thinking “raw fish, disgusting”, but I love it.
Hope that you will try it someday.

What I have never eaten is haggish. The idea is repelling, but it might be great. Don’t know about that, but are not really enthusiast about trying it 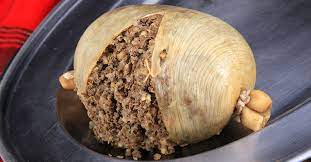 One thing I remembered that I’d like to try is eel. It’d probably be best in the Japanese style.

I’d also like to eat turtle some time, in the Caribbean way.

It’d be nice to try kidneys, though I imagine they’re somewhat like liver. Of course, I’d have them in the British format, in some kind of heavy pie with vegetables and dark gravy.

Never had a corn dog, not that I’m in any rush to – I’ll save that for if I ever attend a baseball game in the USA. On the topic of America, I’ve also never had grits or chocolate gravy (though I did post a recipe for the latter in Cooking videos).

Never eaten snails, whether under the name of escargot or whelks; nor cockles, or scallops, or clams… I’m not sure I’ve even had oysters before. I have eaten a lot of mussels.

I’m not a great fan of sour herring (rolmops). I prefer salty herring with chopped onion. 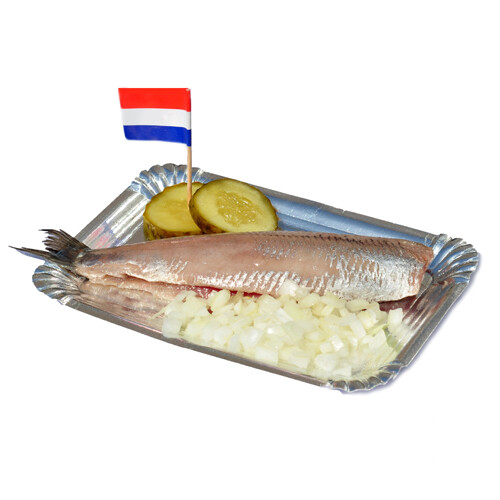 But I’ve never eaten insects (at least not prepared as food).

I’ve never eaten insects (at least not prepared as food).

I hope to try locusts (ideally with honey) one day – they’re, of course, an important food in ancient Mediterranean / Middle Eastern culture.

Oh! On the topic of honey, I don’t think I’ve ever eaten a single-location honey. The typical descriptor on the shop-bought ones is “a mix of EU and non-EU honey”…

Spicewise, I look forward to asafoetida / hing (heng), a major Roman – and now Indian – spice. I know @Sanonius used it when he cooked Parthian chicken, since he posted about that in the Dining Hall.

I haven’t had ostrich. I used to think that was a given until I realised how many people are farming ostriches in Europe and America.

<Edit: I’m pretty sure I have had ghee, I do eat at Indian restaurants after all.>

One thing I remembered that I’d like to try is eel. It’d probably be best in the Japanese style.

It’s delicious, one if my favourite! Japanese eel is usually eaten as unagi-don: 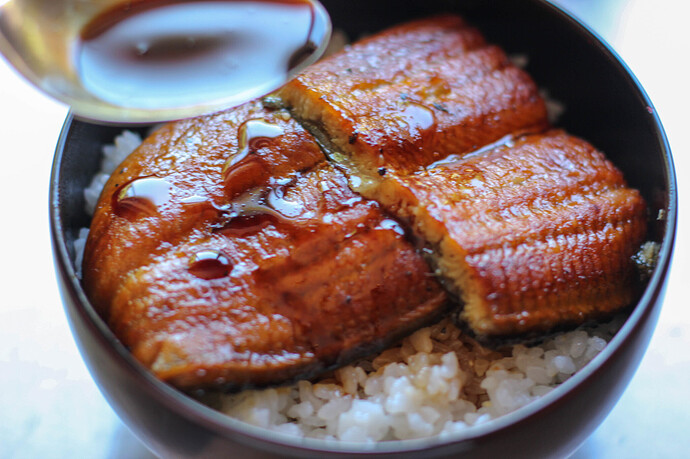 Smoked eel is a Dutch delicacy as well, I think. It’s pretty good

I’ve had most of the things mentioned, except ruby chocolate (had to look that up), crocodile, monkey, ostrich, olive juice / vinegar and haggis. I haven’t had tripoux yet either, talking about stomachs.
I heard crocodile and ostrich both taste like chicken.

As for peculiar things, I’ve had most of it in Japan and Taiwan, like coagulated duck blood soup, raw chicken sashimi, whale tongue, raw horse, stinky tofu, pufferfish sake, snake sake (sake with a snake in it), green caviar (a kind of seaweed), pig ear’s cartilage salad. Also, I had puffin in Iceland once.

As for invertebrates, apart from escargots, oysters, sea urchin, sea cucumber, I’ve had one of those mealworms that are sometimes bottled in tequila (tastes horrible, mostly like alcohol) and deep-fried locusts at a Mexican restaurant once. I also ate an insect burger once, that was pretty mediocre compared to some of the other varieties of non-mammalian burgers out there.

I heard crocodile and ostrich both taste like chicken.

I’ve eaten Durian ice cream once. It was fruity with an aftertaste of sulpher and garlick.

I have never eaten human flesh

Have you had tatami iwashi? (obviously I haven’t) 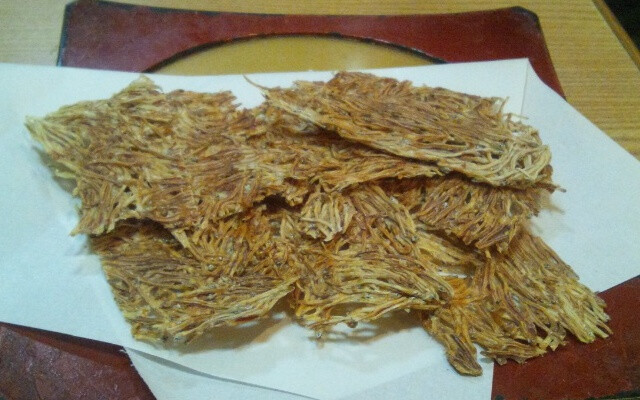 Drinkwise, I don’t think there are a great many types I haven’t tried, but I’m aware that there are some for which I’ve yet to ascend from a fairly low quality level.

I’ve never had Calpis, which doesn’t really appeal to me, or Baikal, which does. Also some heritage drinks like switchel and cherry bounce. Both switchel and the similar Roman posca are actually very easy to make if you just have some quality vinegar (cider vinegar and red wine vinegar, respectively, although technically posca uses sour wine).

No doubt I’ve missed many flavours of ramune, but one mainly buys ramune for the bottles anyway.

Have you had tatami iwashi? (obviously I haven’t)

I might have? Looks like one of the many dried snacks that’s served with beer. I never really know what I’m eating in those situations

I have had the non-dried shirasu. On the same day I had soy sauce icecream

Have you had the dried shredded squid?

Perhaps we should make a table with the foods on one axis and ourselves on the other, and tick off the ones we’ve tried.

I think I had either a pheasant or a partridge a long time ago, and I don’t remember which one it was. I’m sure I’ve had goose fat at some point, but that’s not quite the same thing.

In the region of fruits, for a while now I’ve wanted to try a nashi pear or “sand pear”.

How come? Here in Germany, you can buy pure beekeeper’s honey almost everywhere, i. e. single-location honey.
Not in the supermarket, of course. Rather directly from the beekeeper or in a farm shop.

in a farm shop

I might have had it then. I have eaten farm shop honey, although I don’t really know quite how much of a “farm shop” the place I bought it from really was…

I like mochi but I’d love to taste some fresh made.

And I am scared by natto, but I’m curious too.

Pretty common here.
Actually I have some quail eggs in my fridge right now.

And I am scared by natto, but I’m curious too.

But they find Dutch “drop”(licourice) disgusting and I like that. 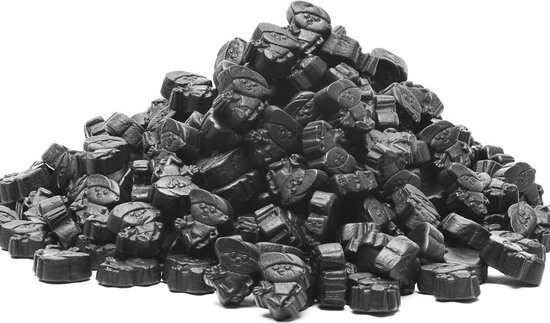 The book Cooking from the Apicius recommends substituting guineafowl (iirc)* for chicken in the recipes, under the assumption that the ancient Roman chicken was “smaller and tastier” than a standard modern one.

* She might have said quail, or either. A smaller bird in any case.

The author also has the opinion that less eggs should be used than originally stated, as the eggs would also have been smaller.

Guineafowl is another bird I’ve never had.

It’d be nice to try carp, since it was a real staple of Medieval European food culture. I don’t think it’s something that one can get in much of that original culinary homeland, though. My feelings are the same about pike… I’ve never eaten a trout either, or really any sort of freshwater fish (one can’t really count salmon in that bracket). If I ever visit the American South, I’ll be certain to have some catfish.

Have you eaten these foods (or drunk these drinks)? Add yourself to the table~

If you’ve had it, put an X in the relevant cell. Feel free to add more items.