Can someone explain the ranking system please on, online go?

They just made some changes. The new system is described here.

Edit: I just looked at your game history. It seems like the first game you played here probably threw the rank calculation way off. You beat a 4k player in your first game, but you’re probably more like ~30k. Now that you’ve come back to the site and started to play some more your rank will get sorted out. You’re either going to have to play more games and expect some losses, or maybe an admin can help reset your rank. I’m not sure what options they have there.

Hopefully an admin can sort it for me, but can someone explain what the ranks are exactly? I only just started learning again. What value is of such rank, what does it mean? I presume its dan ranks, or something? It don’t make sense to me as a beginner anyway, what the numbers actually mean? That article you posted does not make sense much.

Kyu rankings generally start at 30-kyu and go up to 1-kyu. The ranking that is 1 stone stronger than 1-kyu is 1-dan. From there it goes up to 9-dan.

When you open up your profile, you can see your rank through time as a blue line: Play Go at online-go.com! | OGS
The shaded blue area is a confidence interval around your rank. As you can see, this is very broad now, because you haven’t played many games. This will narrow down and stabilise as you play more. Then you can see what your level is.

Don’t worry about your rank, just have fun playing.
However, if you want to have a fair but challenging match, I would advise you to play games with people with a +/- 1 rank difference from you.

My strategy is to start a game, but restrict my match to players who are around my rank. It is more likely that we’ll both have a fair chance of winning, and a fun game. You can do this on “Custom Game -> create”: Play Go at online-go.com! | OGS

EDIT: There is also another number (in the thousands) on the left y axis of the graph in your profile. This is another scale measuring rank (called the glicko-2), but this one is more straightforward: the higher, the better. However, people in the Go community don’t tend to use it when discussing rank. So just ignore this for now.

If you just started you should be 25k , and try to work your way towards 24 and 23k. They usually reccomend 9x9 for your first games of learning the rules.

Your current rank is ~11 kyu / and between 1192-1459 Glico rating - though it looks as it is adjusting based on your recent game results. It will take some time for the OGS rank to stabilize for any new player. One is given a “provisional” rank at the beginning, and the assumption is that it will adjust up or down once that player interacts with others.

Hope that helps to clear up some of the confusion.

Makes sense, similar to lichess, thanks

Also - having taken a look at a few of your games, I think you may benefit from these tutorials:

Go is fairly infamous for having a steep learning curve. I’ve been writing a long series of articles aimed at beginners which tries to make that climb a little less daunting / confusing. If you start at this first article, you’ll find links at the bottom of each given article that will link you to the next one:

For the record, this is not true.

All players start at the mid-way rating (somewhere around 12k - I’m not precisely sure in the new system).

This is so that new players added to the rank pool don’t distort it up or down, because a new person joining the server could easily be a dan or a beginner - we have know way of knowing.

All players also start with a very high “rank uncertainty” - IE how sure are we about their rank - not sure at all. It’s something like +/- 5k.

The higher rank uncertainty is, the quicker rank moves each game, so beginners start at the midpoint and rapidly rank down after a few games.

In the OPs case, his first couple of games were experienced players who bailed on him (

) causing him to win, and the rating shoot up wrongly. This has been fixed.

If you are not familiar with concepts like “kyu” and “dan”, then I think this article will be helpful to explain the traditional meaning of the kyu-dan ranks.

There are various systems of Go ranks and ratings that measure the skill in the traditional board game Go. Traditionally, Go rankings have been measured using a system of dan and kyu ranks. Especially in amateur play, these ranks facilitate the handicapping system, with a difference of one rank roughly corresponding to one free move at the beginning of the game. This system is also commonly used in many East Asian martial arts, where it often corresponds with a belt color. With the ready availa...

However, underlying ratings are calculated with a system called Glicko, which is conceptually similar to Elo, and then these ratings are converted to kyu-dan ranks (which can be thought of as a quantization of the rating into broader bins).

The practical meaning of a difference in rank between two players is approximately how many handicap stones the stronger player should give to the weaker player, if they wish to play a roughly balanced handicap game.

The only difference is that we also translate the Glicko rating to match the more traditional kyu/dan system.

Basically the ranking is the way to make people with same strength play together, more as anything else. It’s supposed to give more fun if you have some fair chance to win a game.

Being too focused on your strength level may hinder your progress and your fun. If you want to avoid that kind of problems, you can hide all the rank system whenever you wish in the OGS settings.

I took this thread as an opportunity to learn a bit about the ranking system.
Diagonal reading the wikipedia entry for glicko2 I got the impression that the ouput of a game is only 1,1/2 or 0 depending on win, draw, defeat (compared to the expected result)… but that sounds weird to me. Shouldn’t there be some some scale depending in the score?? It’s not the same losing by 100 points than losing by 1 point…

You can use Elo/Glicko ratings for go, like in chess, and OGS does this.
But in go, the traditional way is to use a rank ladder, where the steps on the ladder are separated by a unit of handicap.

You could do that in chess as well, for example by defining ranks separated by pawn odds (Handicap (chess) - Wikipedia).

In this traditional handicap ranking system in go, there are about 40 ranks/levels between a new player and world champion level. These are traditionally divided in 3 rank ranges:

The table near the end of FIDE titles and EGF Go ratings at Sensei's Library tries to make a comparison between chess levels and go ranks by the amount of prestige and effort associated with those ranks/ratings. Note to that table: the go ratings in that table are not Elo/Glicko ratings, but EGF ratings. 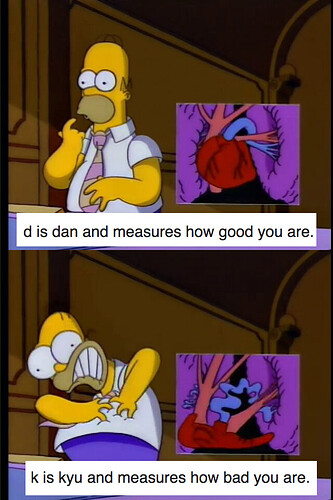 That would make the glicko-2 very Go specific, you also have to be able to use it for other games.
Also, how would you handle resignations and timed-outs?

Would resigning from a winning position lead you to lose less points than if you resign from a position that you’re losing by 100? Sounds like a very complicated model, which might not necessarily be more accurate (and is definitely less general) than the current one.