Rengo: what to do about dropout / AFK players

If rengo game starts, but 1 of players offline for a minute and didn’t make any move, players of his team should be able to kick him out, so game finally starts

(that problem just happened, we finally waited enough to get 4 people, but had to cancel after)

This is “provided for” in the design. It’s a matter of putting it in place in a tidy way.

(apologies for another post-move @stone_defender , this looks like it needs a conversation!)

On first thought, I almost feel like either player on the team who’s turn it is should be able to resign on behalf of the team. While this could probably be abused, I don’t see people playing rengo with random people much so behavior should be self correcting

maybe more than 50% of your team should agree with resign before resign?
(interface may be like with undo)

On first thought, I almost feel like either player on the team who’s turn it is should be able to resign on behalf of the team.

This in fact the case.

But I don’t think it’s what we’re talking about here: in this thread, we are trying to address “how do we get this game to continue in the face of that nuisance person dropping out?”

I had thought exactly this while developing, and it was behind some decisions - and it turns out to be completely wrong, especially in this intial phase of “everyone trying it out”.

In the second option, participants have a choice on whether they want to continue or not… That seems like a plus

yes … but … the if a team forming dialog popped up (over the game, not back to the Games page) then the players could all continue or drop as they like…

Oh so that would be a fork of the existing game? I had assumed you meant “start from scratch”

If it forks, and option to add folks, that sounds great to me!

I wasn’t even thinking of forking, just changing the list of who’s on the teams and proceeding merrily on our way with the same game…

Maybe do individual timer for everyone?
And when someone timeouts or resign, they just no longer part of game and game continues.
Team with no players left, loses.

Not bad. I will put “make sure the lightningbolt works for all players” into the list, which would do this I guess (rather than giving the win to the other side when one player drops!)

individual timer for everyone

they just no longer part of game and game continues

looks like this is the only correct solution for internet rengo.
I just found someone who timeouted a lot of rengo, says that internet connection is bad, but keeps accepting rengo of others again and again
fun was had

more people on team, more risk that someone timeouts for no reason

What about option 1 if 1 or fewer moves made by each player and option 2 if more moves have been played? I.e. equivalent to the cancellation/resignation difference now.

If one player doesn’t in fact start a game which started then the organiser might want to switch up the teams for example. But it seems to me that if you are further into the game then probably best to carry on (if the players left even want to)

Chatting to stone_defender and others, I’ve become convinced that “one clock per player” is the right answer.

When your own time runs out, you are out of the game, but your team plays on until everyone is out.

This would solve the problem somewhat neatly.

Unfortunately, I have no idea how easy or hard it will be yet…

In the mean time, the organiser of rengo matches can remove a person from teams, and make them unassigned during team forming. You might want to do this if someone joins your challenge that you don’t know and may be a runaway risk, or if you do know that they are a nuisance in this way, as stone_defender described.

If rengo game starts, but 1 of players offline for a minute and didn’t make any move, players of his team should be able to kick him out

Pretty drastic and rather hasty? 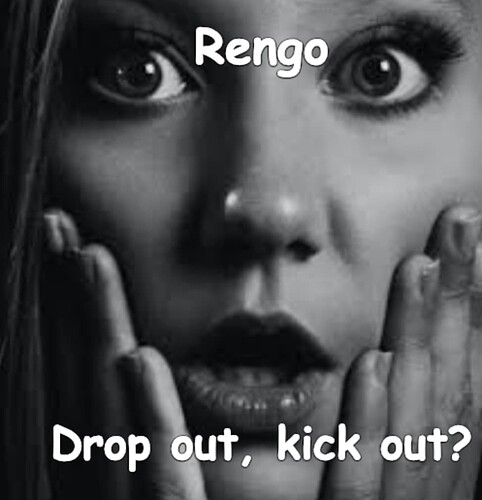 that was v0.1 solution. But before game there is 5mins timer - what to do if the first player don’t do move?
That “before game timer” should be reduced to 1minute, I think. Creator of game may give to players bigger main time next time if wishes. No need to have so long before game timer that impossible to reduce when creating game.
With new solution there is no need to kick anyone. They will just timeout and others continue.
Even 1s/move survival rengo would be possible.

Good. Don’t say I totally disagree with you, because registering for a game and then don’t play, is annoying.
Before game timer is usually rather long. 60 seconds seems fair to me.

Even 1s/move survival rengo would be possible.

Does this not lead to cheating?

?
it would be same as 1vs1 blitz, but players are instead of byoyomi periods.

When your own time runs out, you are out of the game, but your team plays on until everyone is out.

As someone who definitely IS interested in big rengo games with lots of random people, this seems perfect!