We’re pleased to announce that after over a year and a little over 1,000 commits, most of which were only possible because of generosity from hundreds of site supporters that enabled one of us to work full time on OGS, the next big update to OGS is just around the corner!

With Version 5 we’ve overhauled both the web interface and the part of the server that runs the games, the result of which makes everything quite a bit faster and fixes a lot of long-outstanding bugs that were hard to fix because of unfortunate architectural decisions made when we were first writing the OGS. While Version 5.0 still won’t have some of features we’ve been wanting to add for awhile now, it paves the way to add them in relatively quickly after 5.0 is released (it was already a giant change, we want to get it in place and make sure everything is working well before adding new stuff).

We’re planning on rolling out the update on Monday, Feb 13th, starting at around 8am and lasting hopefully no longer than an hour (we’re shooting for about 15 minutes, but sometimes things just take awhile). Most of the upgrade will happen without any disruption to the service, however expect to be disconnected a few times throughout the process, and a few minutes of downtime here and there.

P.S. If you want a sneak peak at what’s coming, head on over to https://beta.online-go.com and check things out - and make sure to report any bugs you find here so we can try and get them fixed up before the big release

Congratulations, and thanks for all the hard work. The beta is looking very shiny.

) I’m looking forward to it!

Went to the beta site on mobile. UI looks nice but I noticed two issues. The “watch” button on the top is getting cut off by the icon next to it so it looks like “watcl”. Responsiveness issue in regards to my small screen. Second, the languages button. If I open it, I can’t seem to dismiss it without choosing a language and forcing a refresh. Also it seems a bit of a prominent placement for a button most people will need to use once if that. Maybe it’s just because I didn’t log in though.

I’m not sure if this is just intermediate bug while the updating is in progress, but in my profile page it lists two tournaments I’m not participating and it shows gold medal for both

I think both tournaments have not yet started.

EDIT: Oh this is just on my overview page. It’s kind of weird seeing tournaments there with a trophy.

Seven of my running games ended by timeout (one won, six lost) … there still was time on the clock, most ~2+ days, one must’ve had ~35 hrs left … hope this is a temporary glitch

YOOHOO, my games are back <happy>

I thought something like that could happen and went on vacations 15 minutes before migration. Just to be on the safe side

not yet for me either

Sidebar banners don’t hide the text under them: 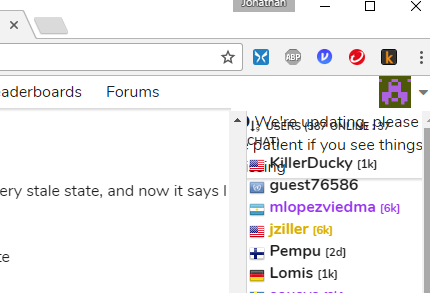 This just happened to me also. In fact, it has timed me out of games in which I had made moves, but now the moves are lost!

I’m also missing several dozen moves in some other games.

This is a very not-good feeling.