Hello everyone! I am here today to present you with the Western Server Challenge! 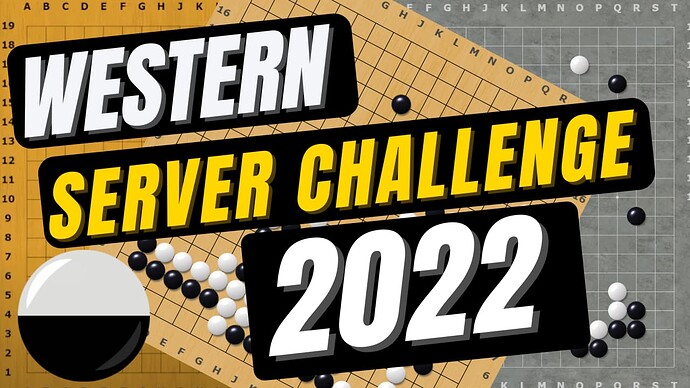 To sign up, please fill our this form. Deadline for signing up is the end of March.

For those who don’t know, last year we did the Western Dan Challenge. The original idea was to promote Dan players to play on western servers more and increase activity. It ended up exploding it to something a bit bigger. However, I wasn’t sure of the impact it had. But due to a lot of people asking me to host it again and the activity about it on the forums here, I have decided to dedicate myself to hosting this event every year if possible from now on. Also, due to the inclusion of other ranks I have deemed it necessary to update the name to the Western Server Challenge.

The goal of this event is to promote more activity on western servers. Your goal as participants are to play 100 games in a month. For the hardcore players, we do have prizes for the most games played in a month for 4 divisions. More information down below…

Each year I hope to make the event just a bit better and more easily manageable as well as making sure everyone can enjoy the event. Thus, I have made some changes this year.

Firstly, the event will be taking place in March instead of February to give more days in the month to complete the event. (What insane person though Feb was a good idea

In addition to this, this year we will only be using OGS. I would like to include KGS but I currently have no way to automatically count the games, and last year manually counting them was a huge pain. If I can solve this problem in the future I hope to add KGS back in the fold. CGS unfortunately does not have enough activity atm. We shall see if that changes in the future.

Also in addition this year, we are including OGS’s new Rengo feature!! I have discussed this with @anoek and concluded that Rengo will have it’s own prizes as well as not limiting it to exclusive teams. Thus, you can play Rengo with anyone and switch up partners as you see fit.

Donations
Last year we had several individuals donate to the prize pool. I will not be doing that this year due to personal reasons. This may change in the future but this year the prize will be capped at $1,000. If you would still like to support the event, I encourage you to donate to streamers playing in the event.

Dan division (3k and above)

DDK division (10k and below)

Games can be started whenever (before March is possible) and then have to finish during the month March ? (Just to clarify)

Only games played in March will be counted.

So they have to start in March too? I’m thinking on correspondence settings, which often go larger as a month…

What is the rule concerning rengo? I suppose that if you play a rengo with 180 persons on each team, and each person makes just 1 move or less, it can’t count as 1 game?

180 people on each team still only plays 1 game. But probably we should avoid trying to find the limit of what’s allowed for the amount of players. Otherwise we would have to make a new rule for that xD

First of all - this is awesome!

Thank you for organizing it again. I don’t know yet if I will participate, if I’ll stop near to 100 or if I will try to do more than last year

Only games played in March will be counted.

I don’t know if that’s what you meant here, but to avoid controversy, I would advise against counting correspondence games.

If this does not work for you, we will donate the funds to a charity or streamer of your choice. (If possible.)

Can I use it to fund next year’s prizes ?

65 posts were split to a new topic: Correspondence games in WSC

Sorry, i still have 2 questions concerning how it works.

I don’t really care in which category i play but i care that all of my games results won’t be split if i am at the boundary. Is that so?

How you consider rengo games? Will they count in the other categories too?

I’m happy that you decide to hold this event again, and hope all the best.

I am considering to play in the rengo category and will play only live games, without trying to win the challenge, but just to promote that feature on OGS. However I think it would be fair

A post was merged into an existing topic: Correspondence games in WSC

Since I’ve moved it, I’ll repost here what Clossius said:

I encourage live games, however to be inclusive of those with day jobs I am including correspondence games that finish in March.

I’m just wondering, what was the most amount of games a user played last year in this challenge?

Also one more question, if Paypal isn’t available in my country and I’d like to receive the money, is there another possible way?