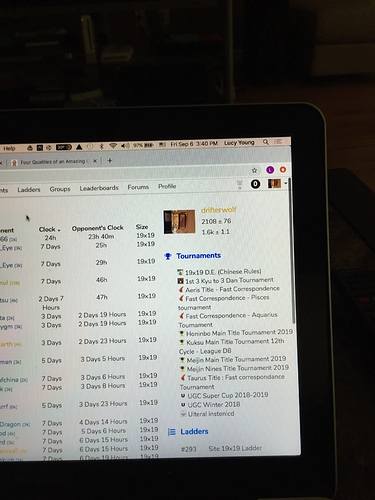 First time seen on my account, on macbook, iphone and ipad.

Not to worry this is a new feature

you were quick to notice.

Dear OGS’s developers. Thank all of you for your great work! It gives me a chance to play Go with many people all around the world. I have a question. Right now, OGS has “Auto-advance to next game after making a move” function and it is only for the games which refer to our turn. What about the others? I hope you can add a button for advancing to every games which are going on. It is really helpful for recheck all the situations, time left, messenges chat and so on. Please consider it. Than…

Why is this a feature? Just because Green as Jade wants it does not mean he knows what’s best for everyone. Can it be turned off?

I liked it the way it was when the black circle would pop up only when it was my turn to move. That way I could tell at a glance if I had a move to make.

Oh, I am good either way. But now it’s gone from my iphone screen. have not checked ipad and macbook. Just so you know.

never mind, now i open another session, it appears. if i click on zero, it goes through my games one by one, an interesting feature. i like it

You can’t break user habits just like that! Now I continuously want to press it!

Just because Green as Jade

He neither requested it, nor wrote it… So I have no idea what you’re talking about.

All the old functionality still exists. The only new feature is that when it is no longer your turn to move on any games you have the option to use this button to cycle through all your active games.

Ok so right now on my screen (it’ll probably go away later) but the black circle that pops up when its your move displays a 0 and when i click on it it sends me to one of my games. Not sure if this is an update or something but it didn’t go away when i refreshed.

Yes this is a new feature @dachen11 when it is not your turn in any games you can click the 0 to cycle through all your active games. It’ll switch back to the original functionality as soon as it’s your turn again in any game.

The only new feature is that when it is no longer your turn to move on any games you have the option to use this button to cycle through all your active games.

My home page does that just fine. This adds clutter to my homepage. It is ugly and redundant.

Why is this a feature? Just because Green as Jade wants it does not mean he knows what’s best for everyone.

Your ignorance of how this works is not uncommon, but it is sad and damaging.

It is really quite hard, and a lot of work, to get a new feature up on OGS. For every new feature that you see, there are literally hundreds of proposals that have been knocked back.

To get a new feature up, first you need to get consensus in a forum thread that it will be a good thing. This feature was no exception, it achieved that. This alone is extremely difficult generally: it’s a very rare proposal that someone out there won’t try to shoot down.

Then you have to code it, of course.

Then you have to get your proposed implementation approved by anoek. This is challenging as well - anoek is a strict gatekeeper.

Then once it is up, you have to deal with the reaction and the complaints. Once again it is rare for a feature to arrive and not need tweaking.

Your complaint is an example of the rude and petulant way that a volunteer contributor will often be treated when their feature is finally released.

Green As Jade did not work on this one, neither did I, but I’ve certainly been through this exact experience before, and it doesn’t leave you feeling “wow, I’m glad I did that, how can I contribute more”.

Given the number of features out there waiting for someone to implement, this seems like a shame,

Do I have the option of turning it off?

At this stage, no. It was implemented as a direct upgrade. As more feedback comes in, we could consider adjusting the implementation in some way, or possibly adding a setting for it to be optional…

I for one think this feature is a great idea, its something close to what i reccomended not so long ago to be honest. It seems like a nice work around was put in there, compared to what i proposed, either way, I’m super greatful.

something close to what i reccomended not so long ago

what did you recommend? Could you link the thread please?

Edit: removed link I found to avoid double up

Arrows to change Game board Suggestions

Hi there. I dont know about other people but I find myself frequently looking at the correspondence games, checking them, thinking about them and so on. But, to go from one of my boards to another i have to either click back, or home to get to the thumbnails of the boards, then click on the game i would like to look at. My suggestion would be this… Add arrow buttons to navigate to a different board that is part of the games that a person is playing. This could be added either at the top task b…

The above is a link to the Idea i posted.

My idea is a lot more complex in what would have needed to be done on it, now i think for a moment, but the idea to go between games with less navigation, and with the way it has now been done, is a far more simple and in my opinion elegant solution to what i wanted.

Yeah thats the one! XD

As more feedback comes in,

In light mode the white border causes the whole thing to be smaller and visually at the same level as the other icons up there.

I’d like it to be slightly more muted in dark mode. Right now the solid black background makes the zero stand out like an alert.

Yeah, I symphatise and know how you feel

But otherwise it would be almost impossible to try to introduce any changes (improvements hopefully). The core functionality remains completely unchanged, the button just does not disappear anymore…

My minor conplaint would be that now it seems when I am on my last active game and submit move it still moves me to a new one (which it did not do before) and I start looking for a move even though it is not my turn, which is kind of confusing for me