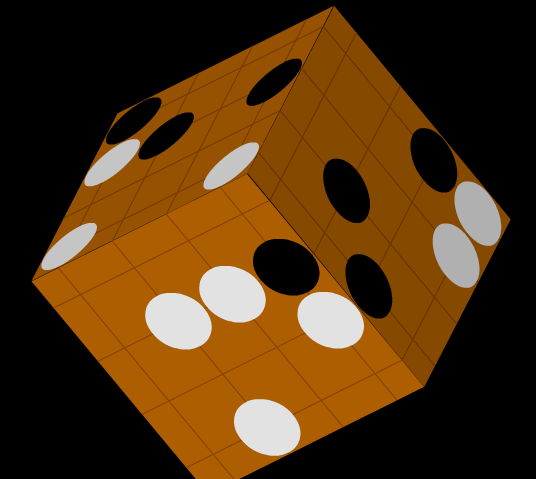 To play on OGS the board has to be represented flat. This can be done by playing on a 14x18 grid and using that part of the board that would be cut out to fold into a cube: 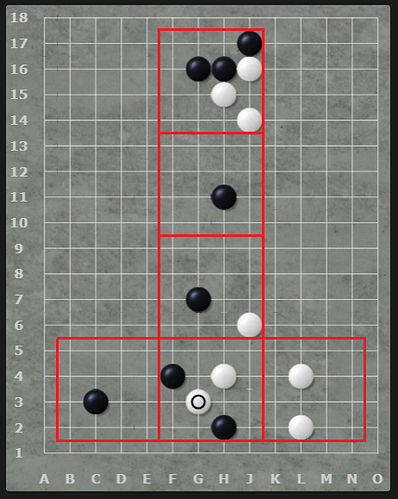 The unused lines around the outside, rows 1&18, columns A&O are there to prevent stones registering as captured when they are not but that still leaves the issue of stones that have been captured in a way that doesn’t register: 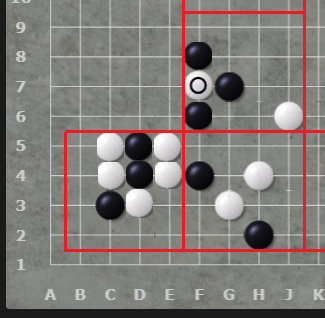 The marked white stone captures the two black stones at D4&D5. Black can then capture the marked stone by playing at D5. There are two ways to deal with this issue.

The first approach is to use the OGS board as a kifu and clock only. When a move is played that doesn’t register properly a note is made in the chat window. eg: White mv 20 at F7 captures D4-5 or if it can’t be played at all then a stone is placed in one of the empty corners to register the move. The top-left for black and the top-right for white. eg: if black wishes to play 21 at D5, he places the stone at A18 to trigger the clock and writes ‘black mv 21 at D5 capturing F7’ or similar.

The second approach is to use a demo board and transfer control after each move. This has large advantages in being able to correctly represent the board position. However; the disadvantages of using a demo board are that:

Either way I strongly, very strongly, extremely strongly recommend using a cardboard and pencil copy of the board right from the beginning. I marked one face with an arrow between G3 and H4 as a reference point and extreme care needs to be taken when copying the moves so as to not spoil the game.

The ability to run in any direction from anywhere on the board makes captures fairly few and so I think the best approach is to use a normal board as a kifu/clock and then transfer to a demo board (using ‘review this game’ from the side-bar) only if necessary.

Does it work? Is it worth the effort? Yes!

Here’s my first and only game so far: 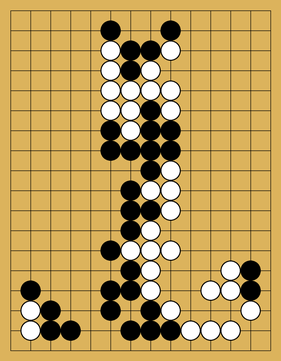 I am particularly grateful to @yebellz for joining me in this experiment and for seeing the flaws in my implementation before we even started. As it turns out we were able to play the whole game without using a demo board or switching to ‘kifu’ mode.

Thank you for the game, @Kosh. It was a very nice and interesting experience.

I was reminded of this thread by your recent link to it, and just realized that I never shared some pictures of the cardboard cube that I used 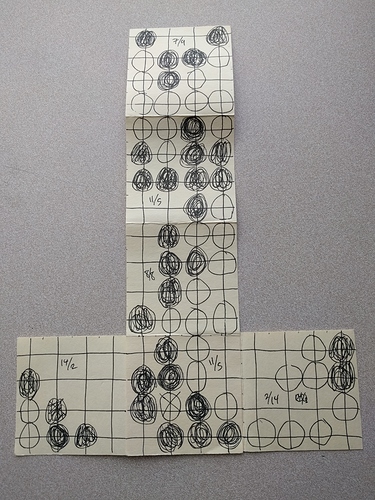 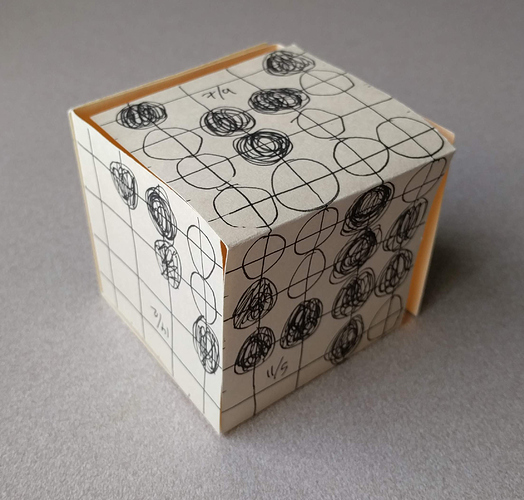 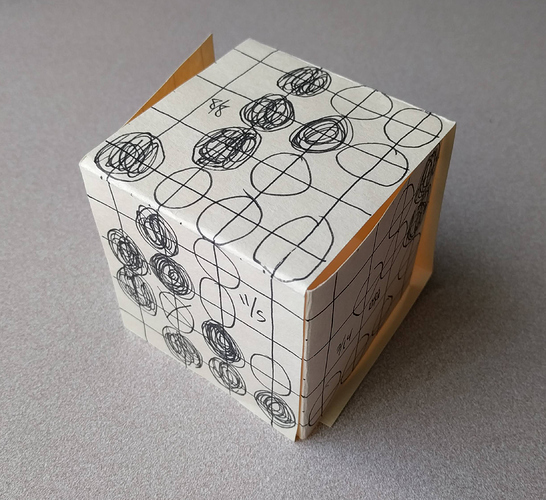 I strongly, very strongly, extremely strongly recommend using a cardboard and pencil copy of the board right from the beginning.

I 100% agree. Much to my own detriment, I only created the above cube about a third of the way into the game.

I would definitely be up to play cube Go. Why not make it larger, though? Each face could be 8x8, ie. 64: the whole board would then be 384 points, close to a 19x19. Also I think a crucifix representation would be easiest to see, rather than clustering at the bottom of the screen.

Though tbh that almost seems more confusing. Handy for sharing game record but it would seem almost easier to just give each side a number, and not worry about mapping back to a standard board… Just submit moves old school Corr style, name your move in text and you both mark it on your board.

Handling a larger cube would be a bit trickier, but seems doable and would be very interesting. 4x4x4 was a nice manageable size for this prototype game.

I actually really liked doing it via OGS. It gave us a convenient channel to communicate, notify each other that it was our turn to play, handle timing, keep a definitive record of the game, and make the experiment publicly accessible.

The easiest way that I can think of to do 8x8(x6faces) Cube Go using OGS would work like this: 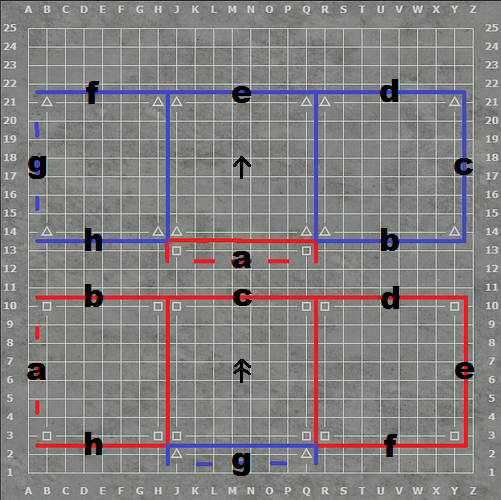 The procedure is the same as in the original post except that you have two sections like cupped hands:

Visually rotate the bottom section 90 degrees clockwise and connect to the upper section.

The two sections had to be shortened from the more obvious 8x24 sections because there needs to be room for vacant points around the board to prevent captures registering when they shouldn’t.

I would definitely be up to play cube Go.

I will be happy to oblige with my next cereal box if this game doesn’t do my head in! Of course if there’s another brave soul out there…

You mean you’re OK to start one now? Edit: he wasn’t.

Pictures from the game the in progress 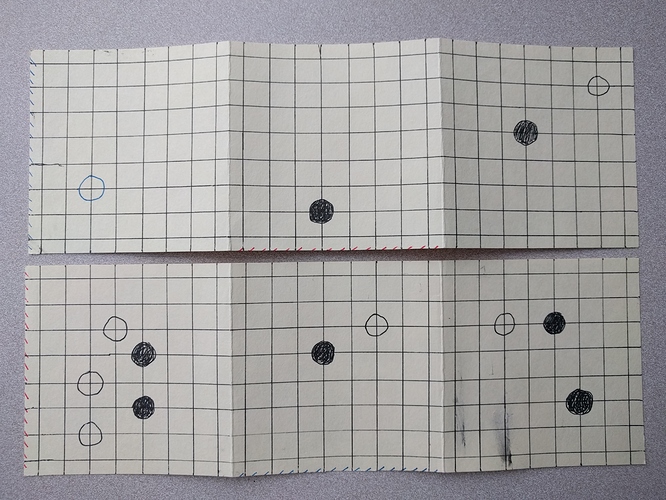 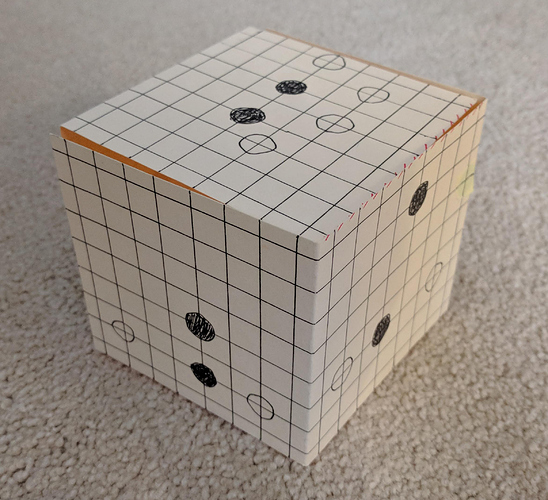 Oh it’s correspondence, I thought you would be playing it blitz.

Working up towards live and then we’ll try four people in Simul-Live-Cube-Go like this one: Help - Live Round Robin

Working up towards live and then we’ll try four people in Simul-Live-Cube-Go like this one: Help - Live Round Robin

I’ll join, but only if the turns are decided by the Thue-Morse sequence.

Haha, I was also about to mention blindfold go as well. We could use a corner-relative coordinate system to relay moves.

Or maybe after each move the coordinates move one space to the left.

Unfortunately that’s impossible on a cube board. You can switch the faces though, but it would not really impact the game, since you could’ve simply turned your cube around.

Let’s play on the surface of a Rubik’s cube where on each turn you can either place a stone or twist the cube, or maybe we should allow the option to do both?

Commercially, I think at least 5x5x5 or 6x6x6 are available for sale, but I think people have 3d printed much larger (although it starts to become difficult to engineer and assemble).

Let’s play on the surface of a Rubik’s cube where on each turn you can either place a stone or twist the cube, or maybe we should allow the option to do both?

I’ll ask again in a couple of years